A Timely Triage Test for TB 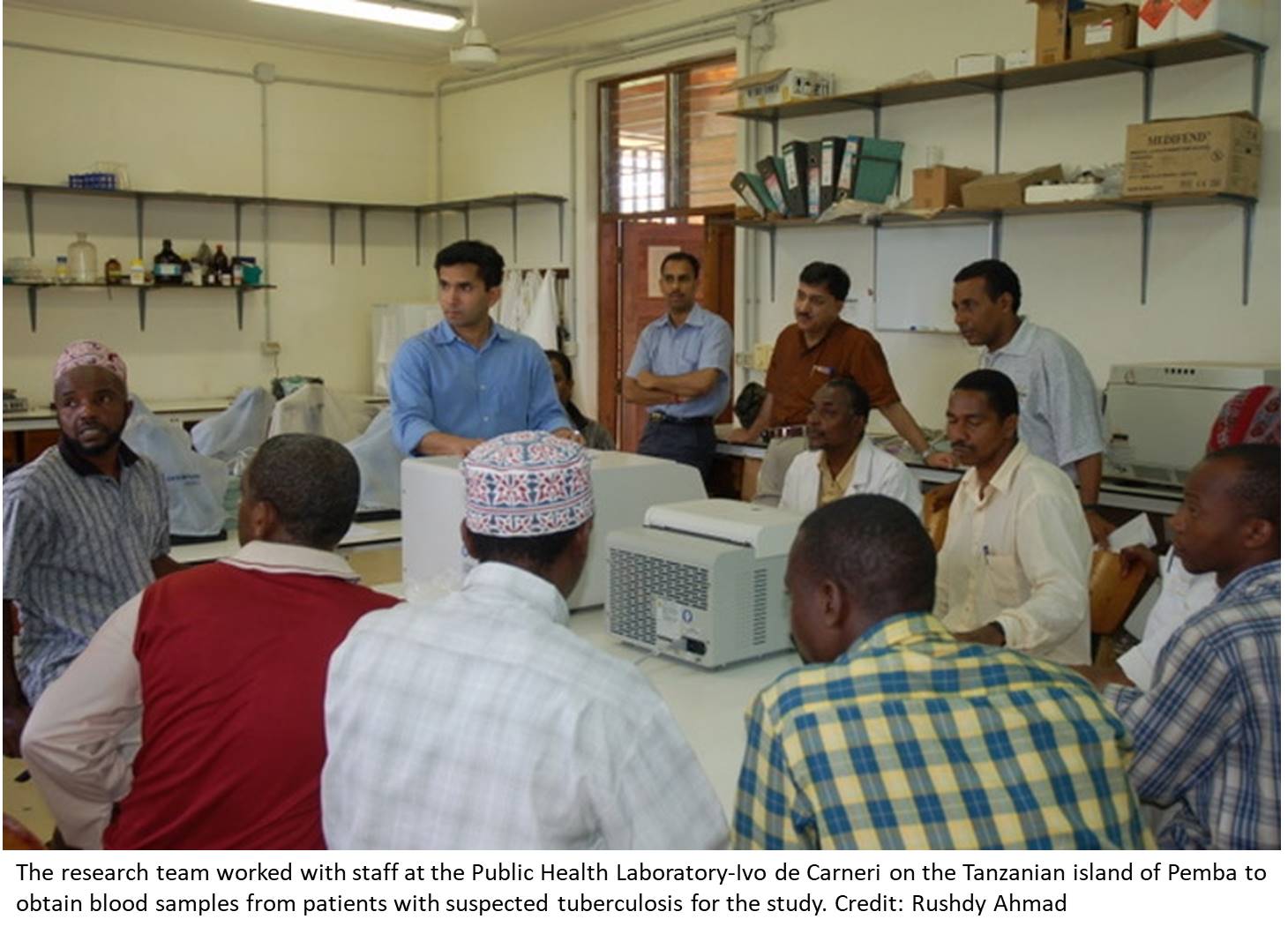 More than 10 million people around the world have active tuberculosis (ATB), and every year more than a million die from it. The majority of patients live in low-resource countries where diagnosing ATB is especially challenging – newer tests require expensive lab equipment that is frequently not available. Additionally, the historic standard of taking a sputum sample and culturing it is slow and often not sensitive enough to correctly identify ATB, meaning that many patients whose disease needs treatment are not identified until it is too late.

To help ill patients at highest risk for having ATB get the care they need, the WHO has called for the creation of a triage test that is blood-based rather than sputum-based (minimizing the infrastructure required to deploy it) and can identify patients who are at high risk for ATB and should be given a diagnostic test. Several commercial blood tests have sought to fill this gap, but the WHO has strongly recommended against their use based on evidence that these tests are too inaccurate.

Now, a team of researchers from several collaborating institutions has answered that call with a fast, ultrasensitive, multiplexed blood-based TB triage test that analyzes a “signature” of the combined levels of four proteins and an anti-TB antibody in blood samples to identify patients who are likely to have ATB and require advanced diagnostics and treatment. It can be configured into a point-of-care test that costs only $2 and gives results in about 30 minutes, lowering the barrier to care in low-resource settings and potentially saving millions of lives. The research is reported in Science Translational Medicine.

“Our test demonstrated 86% sensitivity and 69% specificity, which are very close to the WHO’s minimum requirements of 90% sensitivity and 70% specificity for an effective TB triage test,” said first author. “It also effectively identified the ATB signature in patient samples from three different continents, meaning it can detect many strains of the pathogen, and in both HIV-positive and HIV-negative samples, making it widely applicable to most ATB patients.”

The research team set out to create their blood-based test by identifying a signature set of biomarkers in patients’ blood that consistently indicated a high likelihood of ATB, then developing an easily deployable assay that could detect that signature. They first measured the levels of 47 different blood proteins in about 400 samples taken from people in Tanzania and the Philippines who had been diagnosed with either ATB or a condition other than TB (OTB) using a traditional microbiologic assessment. Then they analyzed the protein level data using a machine learning algorithm that honed in on four proteins that were consistently elevated in patients with ATB: interleukin (IL)-6, IL-8, IL-18, and vascular endothelial growth factor (VEGF). Based on this ATB signature, the algorithm correctly predicted the presence of ATB in 86% of all the positive samples (sensitivity), and the absence of ATB in 65% of the negative samples (specificity). It also correctly identified ATB in 100% of the samples that were HIV-positive, and the absence of ATB in 84% of samples from people who had been cured of ATB.

To improve their test’s ability to detect very low concentrations of the four proteins, they developed an ultrasensitive immunoassay on the Simoa® platform that enabled effective measurement of protein levels using as little as a drop of blood from a fingerprick. This assay improved the algorithm’s sensitivity to 87% and the specificity to 66%. In addition, the test did not predict ATB in 19 samples that had latent TB, demonstrating that it is effective at triaging patients who need immediate medical attention from those whose disease does not require expensive intervention.

“Elevated levels of all four of the blood proteins we analyzed have been identified in a range of different diseases, but only when combined into a predictive algorithm do they have the power to distinguish ATB from other conditions,” said co-corresponding author.

For the second phase of the study, the research team validated their algorithm by testing its ability to identify ATB in a different set of 317 samples taken from patients in Vietnam, South Africa, and Peru. They also tested a fifth biomarker in this cohort of samples to improve the algorithm’s performance: the presence of antibodies against the TB antigen Ag85B. With this added parameter, the test was able to achieve 86% sensitivity and 69% specificity. It also retained its performance in HIV-positive and -negative samples, as well as samples with latent TB. The setup used in the study costs about $10 per test, but could be configured into a $2 consumable version using less expensive materials.

“Not only is this method one of the fastest and most accurate ATB triage tests available, it is also much more amenable to deployment in low-resource communities than other existing approaches, it works on patients with different strains of TB, and its results are not complicated by HIV infection status,” said co-corresponding author. “These qualities give it the potential to be a lifesaver by identifying patients who need a diagnostic TB test right away, which would reduce both deaths from undiagnosed ATB and overuse of antibiotics and expensive diagnostics on non-ATB patients.”

The team is continuing to refine and improve their triage test by adding more diagnostic biomarkers (including directly measuring TB antigens) and further multiplexing the assay so that it can detect up to ten analytes simultaneously.