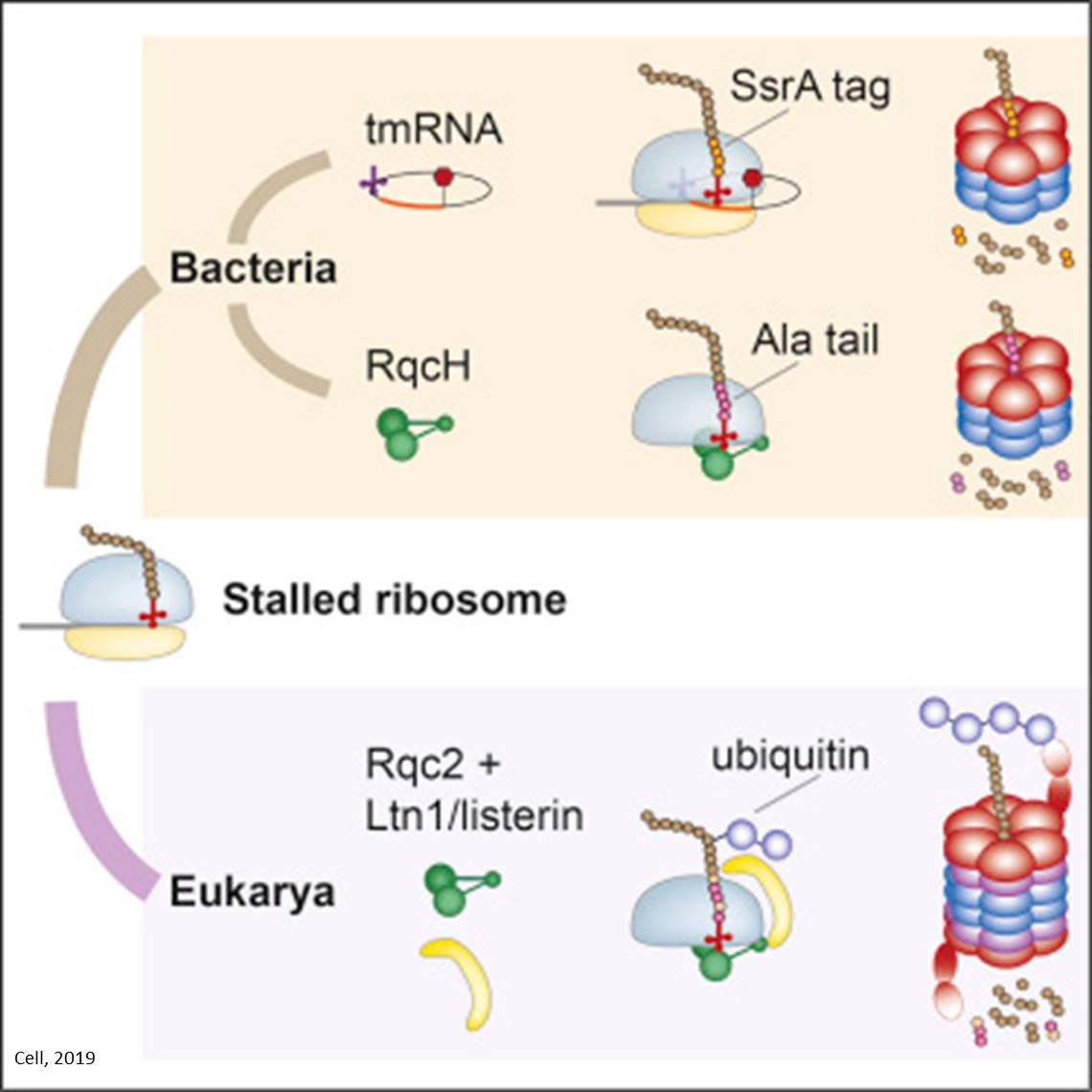 Our cells' process for transforming genes into useful proteins works much like an automobile factory's assembly line; there are schematics, parts, workers, motors, quality control systems and even recycling crews. If the cell's recycling process falters, abnormal protein fragments accumulate, potentially causing the cell's death. In nerve cells, the process is linked to a variety of neurodegenerative diseases, including ALS and dementia.

A new study published on line in the journal Cell uncovers how simpler organisms--bacteria and archaea--manage the recycling of incomplete proteins. The discoveries not only offer new directions for fighting the virulence of some of humanity's most dangerous pathogens, including listeria, staph and streptococcus, they have implications for our understanding of how life itself evolved. The group found the mechanism isn't so different from one they previously uncovered in plant, animal and fungal cells.

"We know that as cells are making proteins, this process is occasionally halted due to errors," says the senior author. "One of the problems with this is that the accumulation of partially formed proteins may be toxic. So in our lab, we're asking how do cells sense this, and how do they disassemble these proteins and recycle the building blocks?"

Organelles called ribosomes serve as the protein-assembly motors within cells. If they stall during the process of piecing together the parts--amino acids--cells have a variety of systems for responding. In human and other eukaryotic cells, when a ribosome jams, rescue factors split it open. A protein called Rqc2, also known as NEMF, zooms in and recruits another protein--the ubiquitin ligase Ltn1, also called listerin. The lab previously discovered that Ltn1 marks the truncated protein fragment on ribosomes with a destruction tag called ubiquitin. Protease saws then handle the demolition.

Underscoring the importance of this recycling process, authors discovered that mutations in Ltn1 can cause the death of nerve cells in mice, resulting in ALS-like symptoms. Bacteria have related, but somewhat more direct systems for addressing halted ribosomes and their protein fragments, according to the Cell report. Studying the bacterium B. subtilis, the the team found that Rqc2 itself marks the protein fragment with a flag--a polymer made of the amino acid alanine. Thus flagged, proteases come to cut up the bad fragment.

Previous studies had suggested that in some pathogenic bacteria, Rqc2 proteins had a different job, one that functioned outside the cell, helping attach the microbes to hosts.

"We have found this is not the complete story," the senior author says. "Rqc2 plays a more fundamental role inside of bacterial cells."

The next step will be to find out whether the defective virulence of strep varieties lacking Rqc2 is primarily a consequence of their failure to recycle protein fragments inside the cell. As increasing varieties of pathogens develop multi-drug resistance to antibiotics, understanding bacterial virulence may prove especially necessary.

Equally important is the realization that Rqc2 serves as a "living" molecular fossil, illuminating new insights about the ancient ancestral organism that emerged some 4 billion years ago to form the very base of the tree of life that evolved into the planet's biodiversity today.

"Shortly after cells invented how to make proteins, they were also faced with determining how to deal with incompletely made proteins," the senior author says. "The analyses suggest that an Rqc2 homolog in the last universal common ancestor already carried out this task."