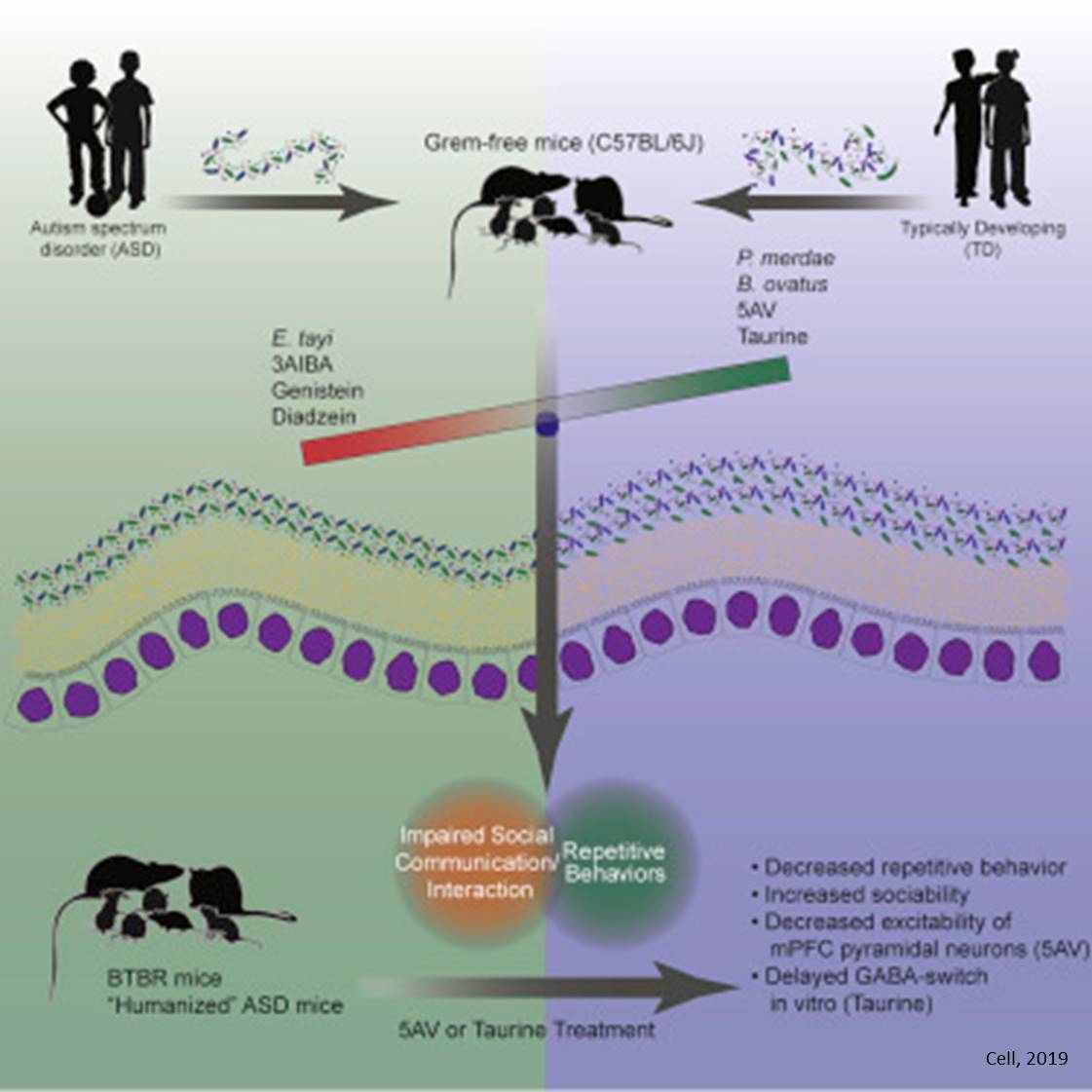 Autism spectrum disorder (ASD) affects an estimated one in 59 people in the United States, causing a variety of difficulties with social communication and repetitive behavior. Many factors, including genetic and environmental effects, are believed to influence symptoms, and there are no approved treatments. Now, using mouse models,

The researchers have discovered that gut bacteria directly contribute to autism-like behaviors in mice. A paper describing the research appears online in the journal Cell. "In recent years, numerous studies have revealed differences in the bacterial composition of the gut microbiome between individuals with ASD and neurotypical subjects," says the senior author. "However, while this previous research identifies potentially important associations, it is unable to resolve whether observed microbiome changes are a consequence of having ASD or if they contribute to symptoms."

"Our study shows that the gut microbiota is sufficient to promote autism-like behaviors in mice. However, these findings do not indicate that the gut microbes cause autism," emphasizes the study's first author. "Additional studies are needed to address the impact of gut bacteria in humans."

The communities of microorganisms that inhabit the human gut are called the microbiota, and their collective genomes are known as the microbiome. These organisms live in a symbiotic state with humans. In exchange for a warm and nutrient-rich environment, bacteria help us digest food, affect metabolism, and educate our immune system.

To examine the microbiota's role in autism-like behavior in mice, the team used "germ-free" mice--laboratory animals that are grown in the absence of microorganisms. Gut microorganisms from children with autism were transferred into these mice via fecal transplantation, and samples from people without autism were transplanted into other groups of animals.

The mice with microbiota from individuals with ASD exhibited autism-like behaviors, whereas the mice harboring microbiota from typically-developing individuals did not show these symptoms. Specifically, they spent less time socially interacting with other mice, vocalized less, and exhibited repetitive behaviors. These symptoms are analogous to behavioral characteristics of people with ASD.

In addition to the behavioral differences, mice colonized with human ASD microbiota also showed altered gene expression in their brains and differences in the types of metabolites present (metabolites are the molecules produced as byproducts of digestion and microbial metabolism). Two metabolites in particular were found in lower amounts in these mice: 5-aminovaleric acid (5AV) and taurine. ASD is sometimes characterized by an imbalance in the ratio of excitation and inhibition in the brain, so the researchers were intrigued by the lower amounts of 5AV and taurine, as both affect certain inhibitory neural receptors called GABA receptors.

"We were surprised to see how profound the effects were," says the lead author.

The team then turned to mice that offer a different model of autism. This strain of mice, called BTBR mice, naturally exhibits autism-like behaviors. The researchers wanted to see if treating these mice with 5AV or taurine would reduce these behavioral symptoms. Notably, treated mice did indeed show decreases in autism-like behaviors. Further, brain examinations showed that 5AV, in particular, decreased neural excitability.

"There are many factors that make autism more complicated in humans than in mice. In mice, we can model the symptoms of the disorder but not reproduce it," says the senior author. "However, this research provides clues into the role that the gut microbiota plays in neural changes that are associated with ASD. It suggests that ASD symptoms may one day be remedied with bacterial metabolites or a probiotic drug. Further, it opens the possibility that ASD, and perhaps other classical neurologic conditions, may be treated by therapies that target the gut rather than the brain, a seemingly more tractable approach."