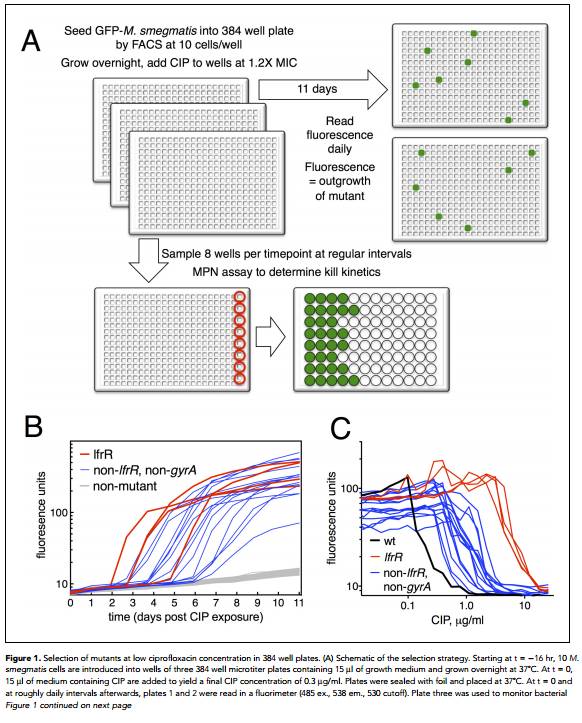 Scientists have identified novel mutations in bacteria that promote the evolution of high-level antibiotic resistance.

The findings, published in eLife, add to our understanding of how antibiotic resistance develops, which the team says is crucial for maintaining the effectiveness of both existing and future drugs.

Senior author of the current study says: "Some species of bacteria, including mycobacteria, develop drug resistance as a result of mutations in their genes. We wanted to gain new insight into the molecular processes that promote resistance in these species by looking at the relationships between the concentration of antibiotics, their killing effects on bacteria, and the emergence of drug-resistant mutants."

To do this, the team grew hundreds of cultures of the species Mycobacterium smegmatis (M. smegmatis), a cousin of the bacterium that causes tuberculosis. They exposed the bacteria to low antibiotic concentrations, where the drugs' microbe-killing effects were relatively slow. This allowed the team to monitor the killing of sensitive bacteria while isolating individual wells where mutants developed.

"We detected the outgrowth of drug-resistant mutants in a fraction of our cultures," says first author. "Each individual carried single mutations in different components of the ribosome, the complex molecular machine responsible for building proteins within cells."

The team found that these novel ribosomal mutations granted the bacteria resistance to several different classes of antibiotics that do not even target the ribosome, and to which the mutants had never been exposed. They also enhanced resistance to two non-antibiotic stresses: heat shock and membrane stress.

Author explains: "We did see a fitness cost to the bacteria in that the mutations reduced their growth rate. However, the reprogramming that occurred within the cells in response to the mutations made the bacteria much less sensitive to both antibiotic and non-antibiotic stresses. This suggests that, in species such as M. smegmatis, these types of mutations can enhance fitness in multidrug environments and serve as stepping stones toward the development of high-level drug resistance, despite the cost that the mutations have on growth."

The team now wants to explore this phenomenon across diverse bacterial species, including Mycobacterium tuberculosis, by coupling experimental biological approaches with a thorough exploration of genome sequence information. A more complete understanding of how multidrug resistance emerges could help in the development or optimisation of new drugs for treating bacterial infections.