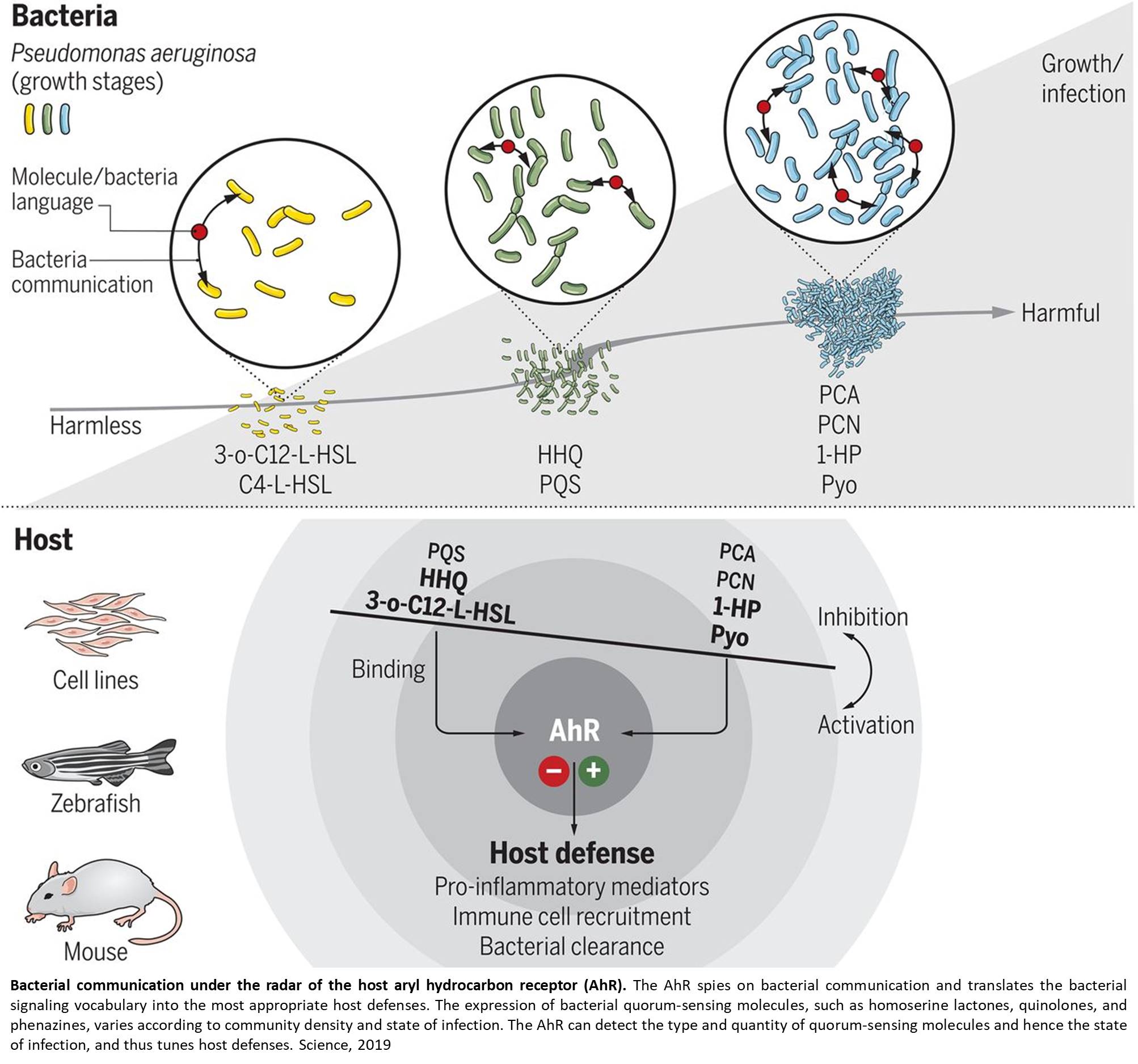 Bacterial infection does not automatically lead to illness; many germs only become dangerous when they occur in large numbers. Researchers discovered that the body has a receptor, which doesn't recognize bacteria themselves, but spies out their communication. The body uses this to register when so many bacteria are present that they secrete illness-inducing substances known as virulence factors.

In the case of opportunistic pathogens in our environment, this critical threshold for an infection is particularly high: only when they occur in very high numbers and/or form illness-inducing substances can they overwhelm a person.

Pseudomonas aeruginosa is one such germ. Everyone regularly comes into contact with it, as it is found predominantly in water pipes, wash basins and other similar places. However, large quantities of pseudomonas can cause serious illness. They do this by forming disease-inducing substances which enable them to gain a foothold in the host and cause damage. This germ can easily cause pneumonia, wound infections or bacteraemia and blood poisoning, particularly in hospital patients. These diseases are extraordinarily difficult to treat, as the bacteria are highly resistant to antibiotics.

How do germs decide when the time is right for an attack? They communicate with one another via small molecules known as 'quorum sensing molecules'. Only when they have reached sufficient density do pseudomonas produce illness-inducing substances and mucous molecules, which defend them against antibiotics and the body's own immune system. This makes sense for the germs, because as long as mucus and virulence factors are not needed, their production only means unnecessary energy consumption. On the other hand, the energy expenditure is worthwhile during an actual attack, because only then can they successfully infect the host and use it as a 'breeding ground'.

A team of researchers have discovered that our body cells are able to spot communication amongst bacteria with the help of a receptor known as the aryl hydrocarbon receptor (AhR). AhR signaling depended on the relative abundances of several classes of P. aeruginosa QS molecules, including homoserine lactones (e.g., N-3-oxo-dodecanoyl-homoserine lactone), quinolones (e.g., 4-hydroxy-2-heptylquinoline), and phenazines (e.g., pyocyanin). "Thanks to this spying, the body can activate the immune system in times of need to fend off an attack from these germs," explains the study's lead author.

In fact, the receptor eavesdrops on the bacteria before they have even reached their quorum; detecting the early stages of quorum sensing molecules inhibits the aryl hydrocarbon receptor, blocking a premature mobilization of the immune defences. "This is effective for the host, as it saves energy to leave a small number of bacteria alone, provided they aren't causing any damage. Only when they've reached a critical mass is the energy required for defence mustered," says the author. This also helps prevent collateral damage caused by the immune system's response.

So our body not only recognizes whether germs are present or not. These recent results show that it also registers the way their numbers are growing, in order to react to differing stages of an infection.