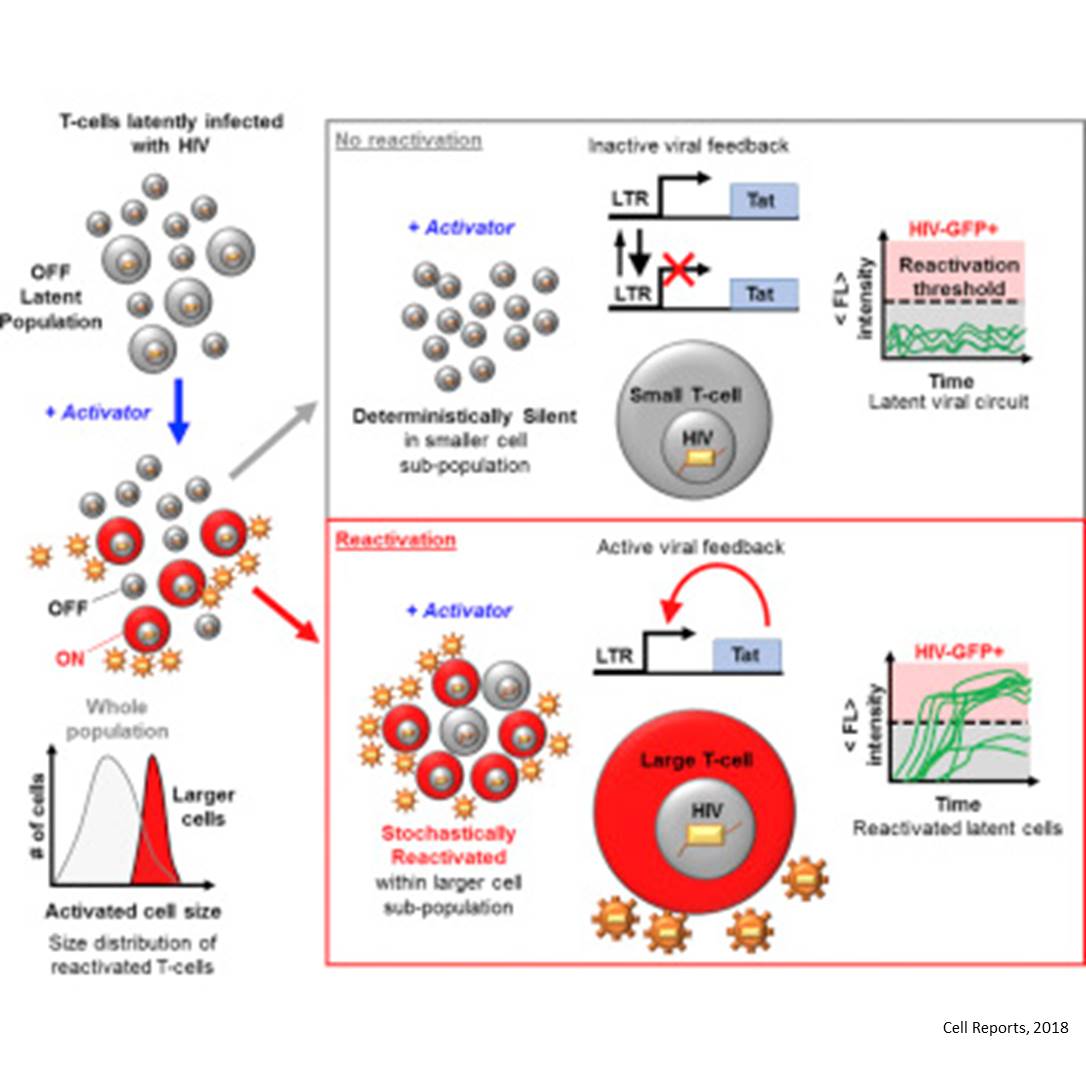 Thanks to the development of antiretroviral drugs, human immunodeficiency virus (HIV) is considered a manageable chronic disease today. However, if left undiagnosed or untreated, HIV can develop into AIDS (acquired immune deficiency syndrome), a disease which led to the deaths of nearly 1 million people worldwide in 2017.

The life-saving drugs don't cure HIV, though, because when the virus infects the body, it insidiously targets the very cells required to trigger the body's immune response to any infection. Specifically, HIV invades CD4 T-cells--a type of white blood cell--making copies of itself and taking over the CD4 host cell's DNA. "Upon infection of a CD4 T-cell, HIV undergoes one of two fates," said the senior author. "It either integrates into a replicating state, leading to the production of hundreds of infectious virions, or it integrates into a latent state where the provirus lies transcriptionally silent."

Researchers have focused on eradicating the latent reservoir because it can reactivate spontaneously, evade drug therapy, or be a source for viral rebound, which can occur if a patient does not strictly adhere to the antiretroviral therapy treatment regimen. "To date, there is no way to distinguish between uninfected cells and latently infected cells in the body, but such an ability would support existing therapeutic approaches to curing HIV," said the senior author.

In a recent study, the group investigated the reactivation of T-cells that were latently infected with HIV in the lab by using a viral construct that contained a gene for a green fluorescent protein (GFP) that gets expressed when a cell reactivates. "The method of time-lapse, single-cell imaging allowed monitoring single latent cell reactivation from their silent to their active states by calculating the mean fluorescence of GFP," explained the lead author of the study.

Once they identified the cells that were reactivated, they calculated the cell size and determined the mean cell diameter necessary for reactivation. They discovered that within a latent population, only larger host cells reactivate while the smaller cells remain silent or latent. According to the lead author, this larger host-cell size provides a natural cellular mechanism for enhancing burst size of viral expression and is necessary to destabilize the latent state while biasing viral decision making.

"Our results present a case of passive host-cell dominated viral decision-making, in which the virus is off when the infected cell is small and can only spontaneously reactivate in larger cell sizes," said the senior author. "This presents a case of the host cell depicting the right conditions for viral decision-making to occur."

The team also determined that the cells' transition from latent to active is dependent on the cell cycle--the stages by which cellular DNA replicates--and can be modulated with drug treatments. "We showed that you can use drug treatments to modulate a population of cells in and out of a specific cell cycle state in order to bias their viral reactivation," said the senior author.

These findings may be useful in guiding stochastic design strategies for drug therapies, have applications in synthetic biology, and play a role in advancing HIV diagnostics and treatments.