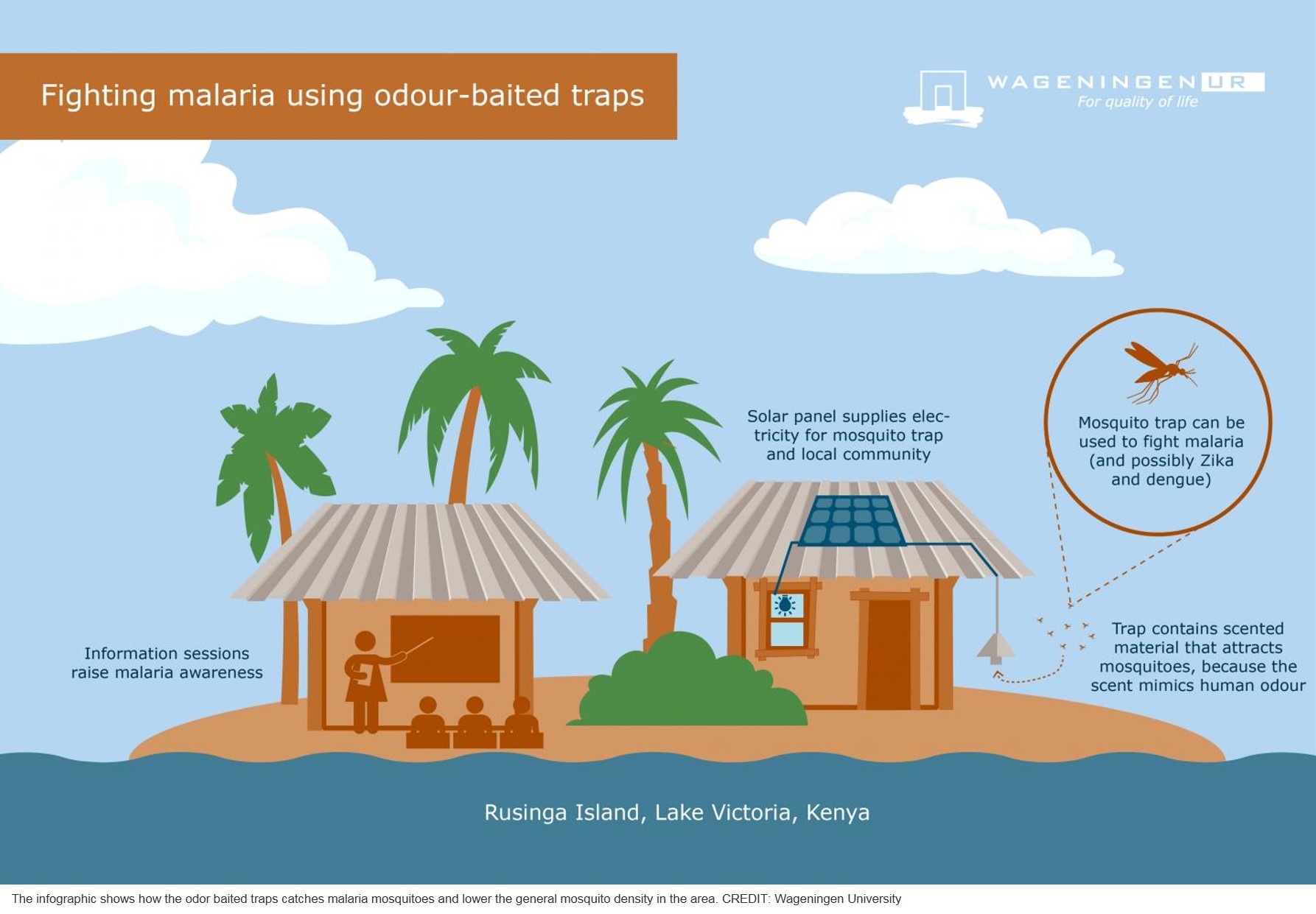 The use of a newly-developed mosquito trap incorporating human odor has resulted in a 70% decline in the population of the most significant malaria mosquito on the Kenyan island of Rusinga. After the introduction of the odour-baited traps on the island the proportion of people with malaria was 30% lower among those living in houses with a trap compared to people living in houses who were yet to receive a trap. The study was published in The Lancet.

"The objective of the trial on Rusinga Island in Lake Victoria was to investigate whether malaria mosquitoes can be captured and destroyed using traps with a lure so that the risk of new malaria infections is minimised," explains the author. "Ultimately we want to eradicate malaria completely, in an environmentally-friendly and sustainable manner. In the case of extensive use of insecticides to kill the mosquitoes which are the carriers of the disease, the mosquitoes become resistant to the chemicals. That makes combating malaria increasingly tricky and less environmentally-friendly. Alternative methods are therefore urgently needed. As we use a natural lure - namely human odour - in our approach there is no negative impact on the environment and it is very improbable that the mosquitoes will become 'resistant' to being captured. After all, the mosquitoes need their attraction to the lure in order to be able to survive."'

The odour-baited trap may also offer a solution to diseases like dengue fever and the Zika virus. Aedes aegypti (the yellow fever mosquito), is a vector for these viruses. This mosquito is attracted to the same humanised scent that attracts malaria mosquitoes. Zika and dengue fever could therefore be combated with the odour-baited traps.

The success of the new approach is the combination of the odour-baited trap with mosquito nets, anti-malaria drugs, and a solid social strategy. The odour-baited traps need electricity to operate, but there is no central electricity supply on Rusinga, an island in Lake Victoria. Solar panels were installed on the roofs of homes. These not only provided electricity for the mosquito traps but also provided the homes with power for light and to charge a mobile phone.

The use of solar energy to control malaria gave rise to the project name: SolarMal. Great efforts were also made in relation to education about malaria and actively engaging the inhabitants of Rusinga in the project. Thanks to this combined approach, all 25,000 inhabitants of Rusinga participated in the study. When the odour-baited traps are used, the use of insecticides to combat the mosquito population can be minimised, thus avoiding any harmful side effects of such products. The Wageningen anti-malaria approach therefore has positive effects in reducing the spread of malaria as well as positive effects on the living conditions of the population.

The World Health Organization (WHO) is aiming to eradicate malaria by 2030. To this end, investments are being made in the development of vaccines against the parasite and in combating the vectors of the parasite: the mosquitoes. The odour-baited trap - named 'the Suna trap' - represents an effective and safe solution in the fight against the mosquito.