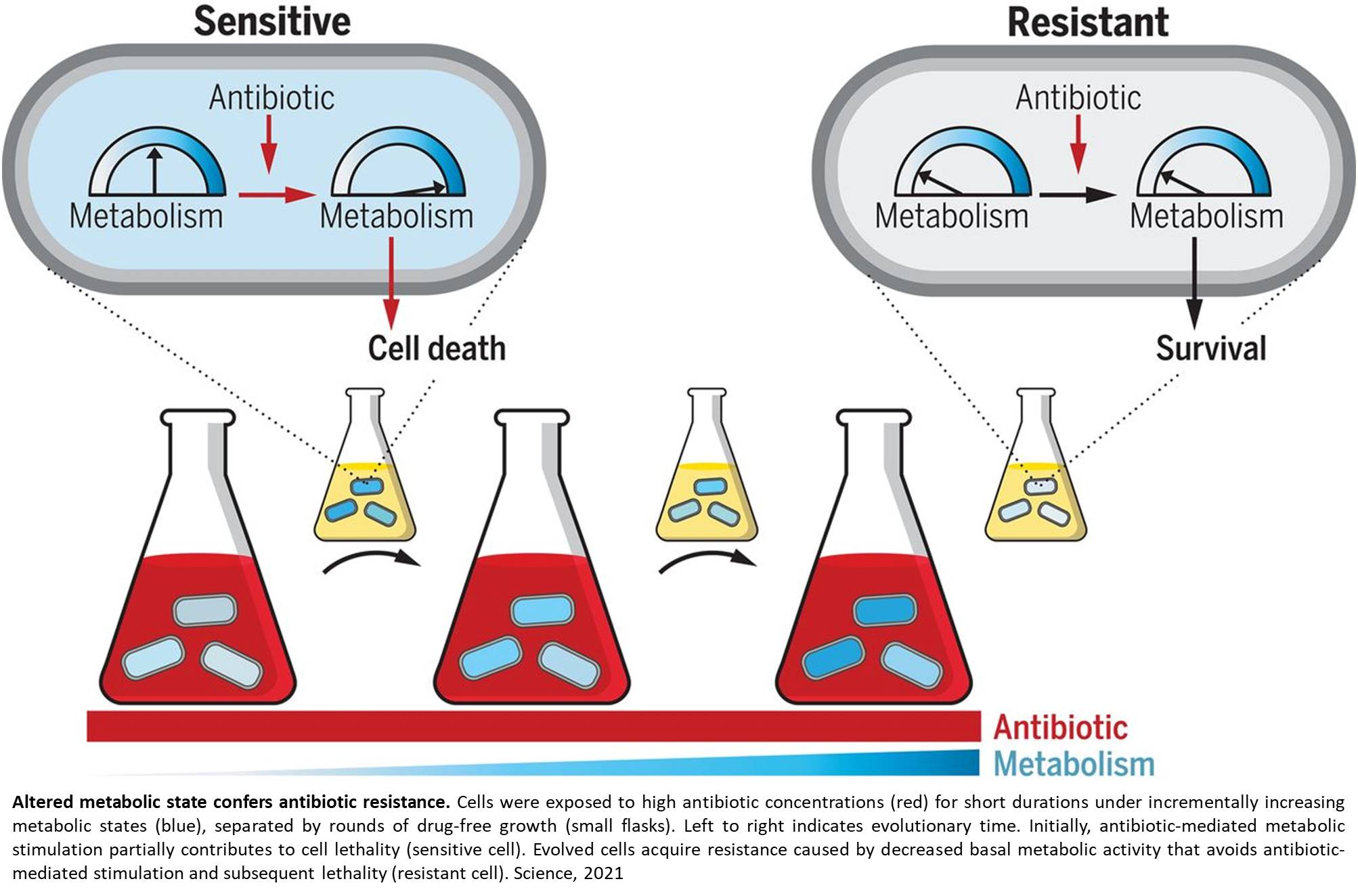 Bacteria have many ways to evade the antibiotics that we use against them. Each year, at least 2.8 million people in the United States develop an antibiotic-resistant infection, and more than 35,000 people die from such infections, according to the U.S. Centers for Disease Control.

Most of the mutations known to confer resistance occur in the genes targeted by a particular antibiotic. Other resistance mutations allow bacteria to break down antibiotics or pump them out through their cell membranes.

The researchers have now identified another class of mutations that helps bacteria develop resistance. In a study of E. coli, they discovered that mutations to genes involved in metabolism can also help bacteria to evade the toxic effects of several different antibiotics. The findings shed light on a fundamental facet of how antibiotics work, and suggest potential new avenues for developing drugs that could enhance the effectiveness of existing antibiotics, the researchers say.

"This study gives us insights into how we can boost the effectiveness of existing antibiotics because it emphasizes that downstream metabolism plays an important role. Specifically, our work indicates that the killing efficacy of an antibiotic can be enhanced if one can elevate the metabolic response of the treated pathogen," says the senior author.

The new study builds on previous work from the lab showing that when treated with antibiotics, many bacteria are forced to ramp up their metabolism, leading to an accumulation of toxic byproducts. These byproducts damage the cells and contribute to their death.

However, despite the role of overactive metabolism in cell death, scientists had not found any evidence that this metabolic pressure leads to mutations that help bacteria evade the drugs. The authors set out to see if they could find such mutations.

First, they performed a study similar to those normally used to look for antibiotic resistance mutations. In this type of screen, known as adaptive evolution, researchers begin with a laboratory strain of E. coli and then treat the cells with gradually increasing doses of a particular antibiotic. Researchers then sequence the cells' genomes to see what kinds of mutations arose during the course of the treatment. This approach has not previously yielded mutations to genes involved in metabolism, because of limitations in the number of genes that could be sequenced.

"Many of the studies before now have looked at a few individual evolved clones, or they sequence maybe a couple of the genes where we expect to see mutations because they're related to how the drug acts," the lead author says. "That gives us a very accurate picture of those resistance genes, but it limits our view of anything else that's there."

For example, the antibiotic ciprofloxacin targets DNA gyrase, an enzyme involved in DNA replication, and forces the enzyme to damage cells' DNA. When treated with ciprofloxacin, cells often develop mutations in the gene for DNA gyrase that allow them to evade this mechanism.

In their first adaptive evolution screen, the team analyzed more E. coli cells and many more genes than had been studied before. This allowed them to identify mutations in 24 metabolic genes, including genes related to amino acid metabolism and the carbon cycle -- the set of chemical reactions that allows cells to extract energy from sugar, releasing carbon dioxide as a byproduct.

To tease out even more metabolism-related mutations, the researchers ran a second screen in which they forced the cells into a heightened metabolic state. In these studies, E. coli were treated with a high concentration of an antibiotic every day, at incrementally increasing temperatures. The temperature changes gradually drove the cells into a very active metabolic state, and at the same time, they also gradually evolved resistance to the drug.

The researchers then sequenced the genomes of those bacteria and found some of the same metabolism-related mutations they saw in the first screen, plus additional mutations to metabolism genes. These included genes involved in synthesis of amino acids, especially glutamate, in addition to the carbon cycle genes. They then compared their results to a library of genomes of resistant bacteria isolated from patients, and found many of the same mutations.

The researchers then engineered some of these mutations into typical E. coli strains and found that their rates of cellular respiration were significantly reduced. When they treated these cells with antibiotics, much larger doses were required to kill the bacteria. This suggests that by turning down their metabolism after drug treatment, bacteria can prevent the buildup of harmful byproducts.

The findings raise the possibility that forcing bacteria into a heightened metabolic state could increase the effectiveness of existing antibiotics, the researchers say. They now plan to further investigate how these metabolic mutations help bacteria evade antibiotics, in hopes of discovering more specific targets for new adjuvant drugs.

"I think these results are really exciting because it unleashes gene targets that could improve antibiotic efficacy, that are not being currently investigated," the lead says. "New resistance mechanisms are really exciting because they give many new avenues of research to follow up on and to see to what extent is this going to improve the efficacy for treating clinical strains."