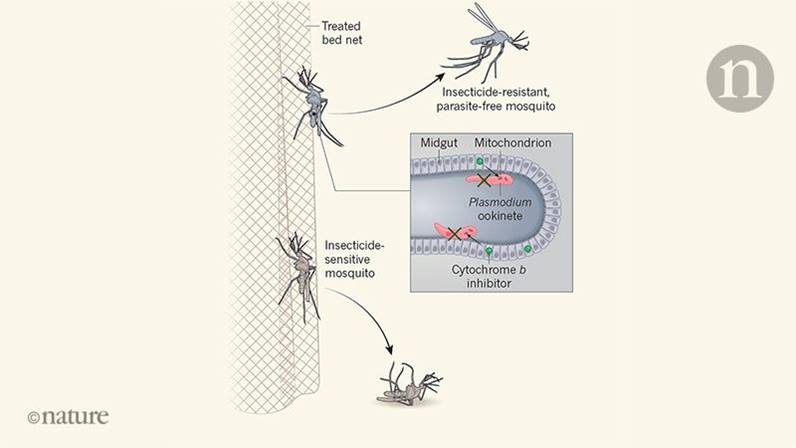 For decades, one of the strongest weapons against malaria has been a one-two punch: low-tech mosquito bed nets to physically block biting, treated with deadly insecticides to kill the mosquitoes.

With widespread use of this combination, malaria deaths have dropped significantly -- though nearly 445,000 people died from the disease in 2016 alone. But now the threat is again worsening, as the ever-adaptable pest has become resistant to insecticides.

Researchers found that they could use the same drug -- atovaquone -- used to treat the malaria parasite when a person gets sick, coat mosquito bed nets with it, and let mosquitoes ingest the anti-malarial drug. The medication "cures" the mosquito, so it can't spread the disease.

How did they get the medicine into the mosquitoes? The researchers developed computer models that explored how adding atovaquone to the bed nets and its ability to cure individual mosquitoes affected malaria prevalence in the human population as a whole. The' modeling factored in various external conditions, such as the current malaria prevalence, bed net coverage, and level of insecticide resistance.

They found that mosquitoes that sat on the surfaces for six minutes -- a typical resting time on bed nets -- would absorb the medicine needed to kill the malaria parasite in them. Similar transmission-blocking effects are achieved using other cytochrome b inhibitors, which demonstrates that parasite mitochondrial function is a suitable target for killing parasites. Incorporating these effects into a model of malaria transmission dynamics predicts that impregnating mosquito nets with Plasmodium inhibitors would substantially mitigate the global health effects of insecticide resistance.

The method could be more effective and less harmful to the people and environment in malaria hotspots. It has several advantages over the current techniques, the author said.

"The mosquito should not develop resistance to the compounds because we're just killing the parasite that's inside it," she said. "And atovaquone is already a licensed drug, so we know it's safe for humans."