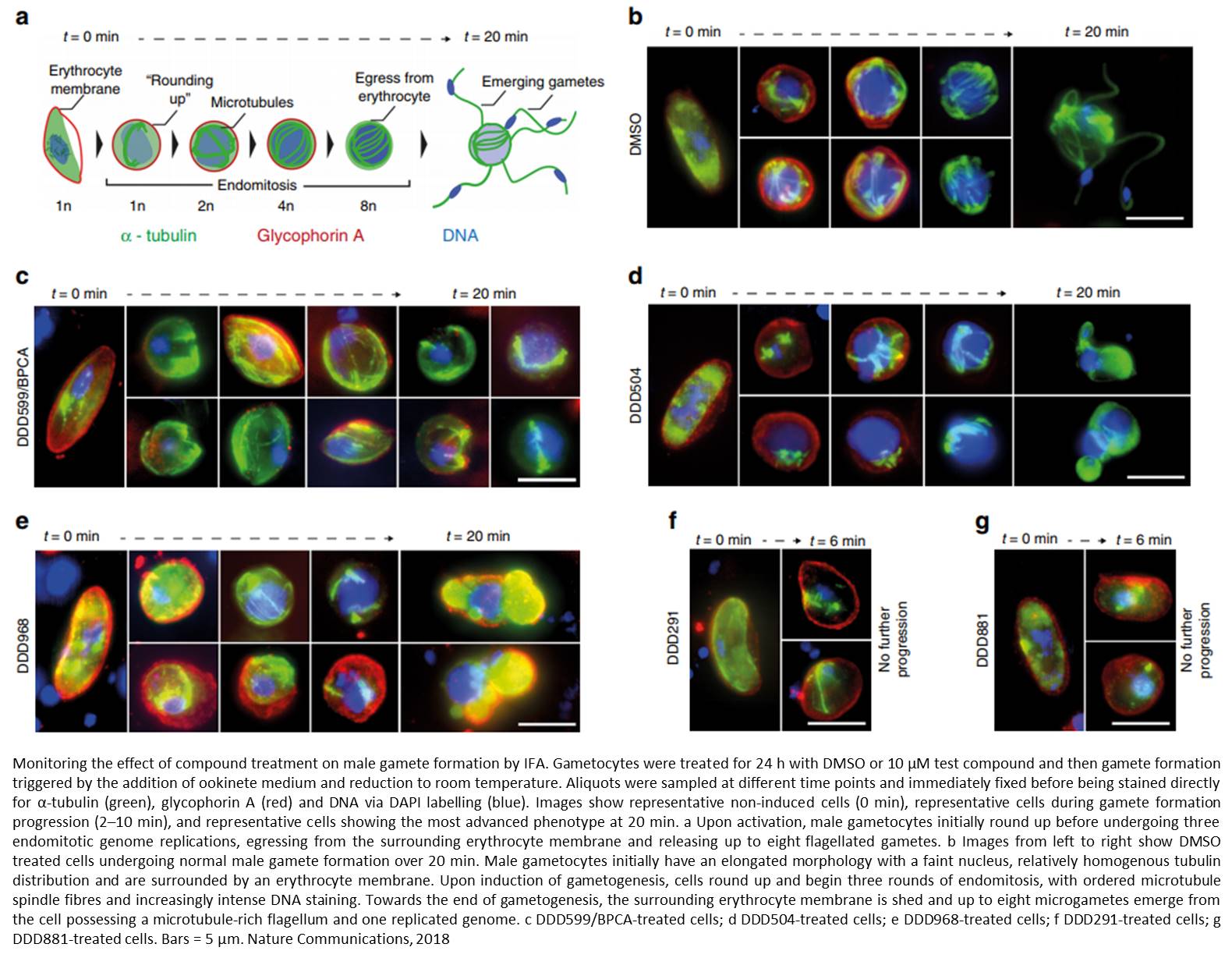 Researchers have identified compounds that could prevent malaria parasites from being able to infect mosquitoes, halting the spread of disease.

Preventing transmission of malaria is a key part of efforts to eliminate the disease. A person can be cured of the disease using drugs that wipe out the replicating form of the parasite, but still carry dormant, sexual forms. These are responsible for transferring the parasite to the mosquito when it bites them.

Inside the mosquito, the dormant parasites rapidly mature and then multiply, leaving them ready to infect a new person when the insect feeds again.

Now, a team led by researchers have identified a number of compounds that prevent the parasite maturing inside the mosquito. The team screened more than 70,000 compounds and identified six compounds that have the potential to be turned into drugs that block disease transmission. Their results are published in Nature Communications.

One compound has already been shown to block parasite transmission from mice, but the team are researching all the compounds further to determine exactly how each works, and how they could be adapted as future drugs. Hit molecules possess varied activity profiles including male-specific, dual acting male–female and dual-asexual-sexual, with one promising N-((4-hydroxychroman-4- yl)methyl)-sulphonamide scaffold found to have sub-micromolar activity in vitro and in vivo efficacy.

For example, these drugs could not be given directly to mosquitoes, so they would need to be stable enough to be given to a human and survive being transferred into the mosquito. Determining exactly what each compound is doing could also reveal more about the biology of the transmission process and identify new targets for future drugs.

The parasite that causes malaria has a complex life cycle. When a person is infected, they will have asexual forms of the parasite in the bloodstream, which cause the symptoms of the disease. However, there will also be male and female sexual forms, which once mature lie dormant in the body.

Because they are dormant and not very reactive, these parasites are very difficult to attack with conventional drugs. However, it is these male and female forms that, after sex in the mosquito, create more newly infectious asexual parasites. These gather in the mosquito's salivary glands, ready to pass on malaria to the next unfortunate human.

While inside the mosquito, the sexual parasites are very active - they are one of the fastest replicating cell types known - making them surprisingly good drug targets. In order to find compounds that could disrupt the sexual parasites, the team mimicked the conditions inside mosquitoes, fooling parasites into starting sexual development.

Once they found the right conditions, they miniaturised the process so that it could be examined with a microscope. This allowed them to screen thousands of compounds and see if they had any effect on active sexual parasites.

The senior author added: "It took several years to find the right conditions that would stimulate the sexual parasites and to miniaturise the environment, but it was worth it - at our best we were screening 14,000 compounds a week!"

"Overall we screened around 70,000 molecules and found only a handful of potent compounds that are both active and safe to use with human cells. It was like finding needles in a haystack."

Kinase acts like a transcription factor in breast cancer