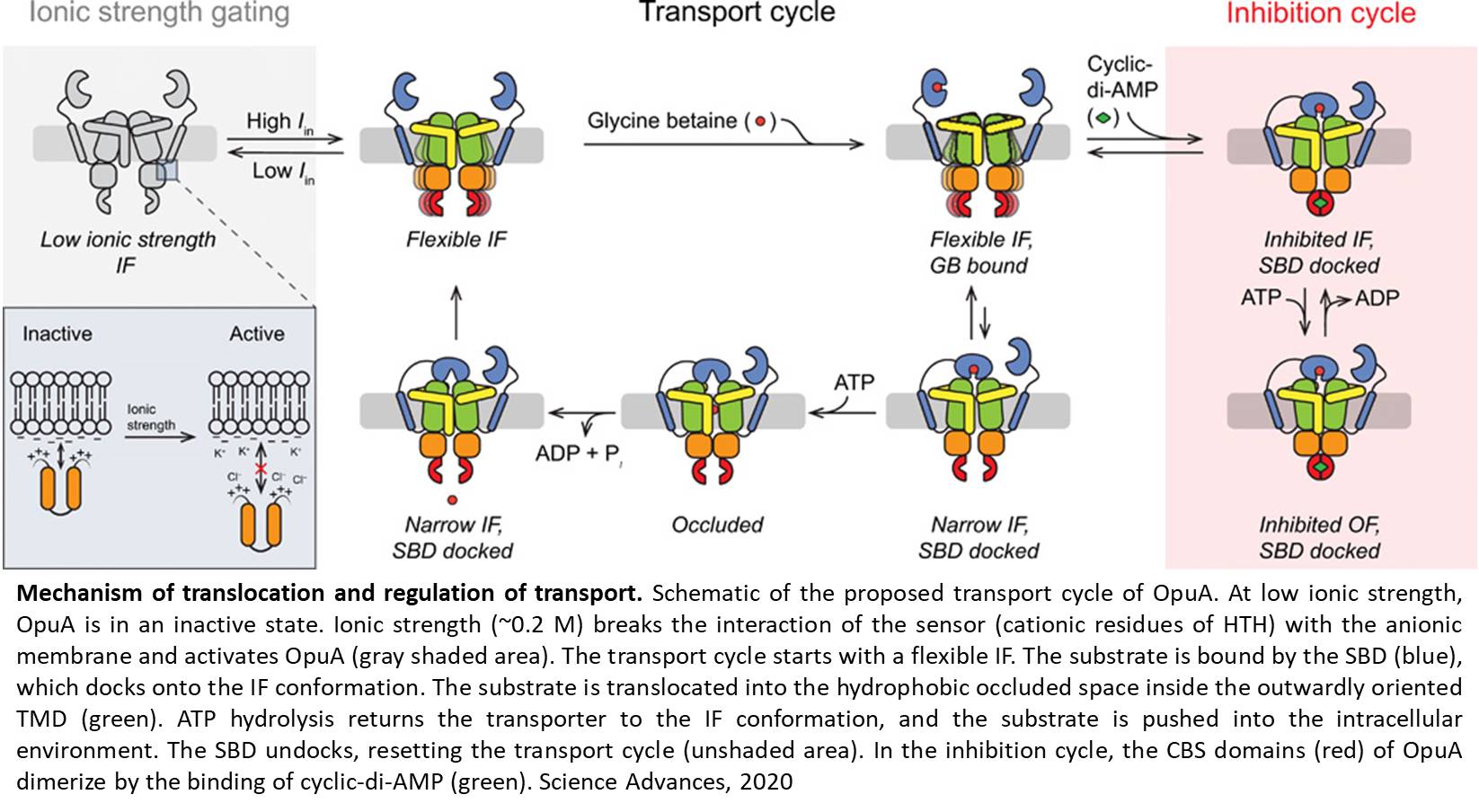 A high concentration of salt or sugar in the environment will dehydrate microorganisms and stop them from growing. To counter this, bacteria can increase their internal solute concentration. Scientists elucidated the structure of a transport protein OpuA, that imports glycine betaine to counter osmotic stress. The protein belongs to the well-known family of ABC transporters, but it has a unique structure and working mechanism. The results were published in Science Advances.

Food preservatives are designed to make life difficult for microorganisms. Salt and sugar are well-known preservatives; they increase the electrolyte concentration to above that inside bacteria. The result is that water flows out of these bacteria until concentrations are approximately equal, leaving behind shrivelled cells that can no longer grow.

'However, some bacteria have evolved defences against such preservatives,' says the senior author. Around 20 years ago, a food producer asked him to find ways to defeat those defences. It led to the discovery of OpuA, a transport protein that is triggered by dehydration and responds by importing a substance called glycine betaine. 'This increases the osmolyte concentration inside the cells without compromising the structure of proteins. The result is that the cells absorb more water and start to grow again,' explains the author.

OpuA belongs to a well-known class of proteins called ABC (ATP-binding cassette) transporters. This protein family is one of the largest known in biology. Humans have around 50 of these transporters, some plants have hundreds of them and bacteria have a number somewhere in between. OpuA is special because it can import glycine betaine in huge amounts, leading to a very high internal osmolyte concentration.

The problem was elucidating the structure of the protein. Until a few years ago, the standard method was to grow crystals from proteins and investigate those using X-ray diffraction. It is very difficult to grow crystals from proteins that are embedded in the cell membrane and for OpuA, it turned out to be impossible. Based on the amino acid sequence and the structure of other ABC transporters, the scientist compiled a model of the structure, but this could not explain the way that OpuA functioned.

The breakthrough came with the introduction of cryo-electron microscopy. A large number of single proteins were scanned in an electron microscope at a very low temperature, after which all the images were combined to provide a direct view of the structure. The results showed not one but five different structures. 'The protein is a dynamic structure, as it changes conformation to suit the function, but the different parts also vibrate on their own,' explains the author. 'This means that one protein exists in many variant structures. And you cannot grow crystals amidst such diversity.'

The first conclusion from the cryo-EM studies was that most of what they thought they knew about the structure of OpuA was incorrect. 'For example, parts that we believed to be on the inside of the cell membrane sat on the outside.' The real structure was beautiful, according to the author. The second conclusion was that OpuA is in part regulated by cyclic di-AMP, a second messenger molecule that was only recently discovered. 'The protein primarily responds to ionic strength, which varies as a function of osmotic stress, but it uses cyclic di-AMP as a second brake to completely stop importing glycine betaine and prevent the cell from exploding under non-stress conditions.'

The ionic strength sensor of the OpuA protein carries a positive charge while the membrane has a negative charge. When water is drawn from the cells, the concentration of salts, such as potassium chloride, increases. 'This disrupts the interaction of the ionic strength sensor with the membrane, which activates the pumping mechanism.' Once the glycine betaine concentration is high enough to make the cell swell to its normal proportions, the protein-membrane interaction is normalized. 'However, the pump does not shut down completely, so it continues to import some glycine betaine. This will increase the pressure inside the cell and eventually cause it to pop.' That is why cyclic di-AMP is used to fully shut down the pump.

The paper describes the different structures and provides functional data on the transport protein. This combination gives a good insight into the workings of OpuA: a satisfying result for Poolman. 'It is the accumulation of twenty years of research, which has produced seven or eight PhD theses.' The results show how the resistance of bacteria to preservatives, such as salt or sugar, could be overcome. 'Furthermore, we are part of a consortium that is trying to construct a synthetic cell. OpuA is an important part of the design; it is meant to regulate the cell's internal pressure.'

Disrupted biochemical pathway in the brain linked to bipolar disorder