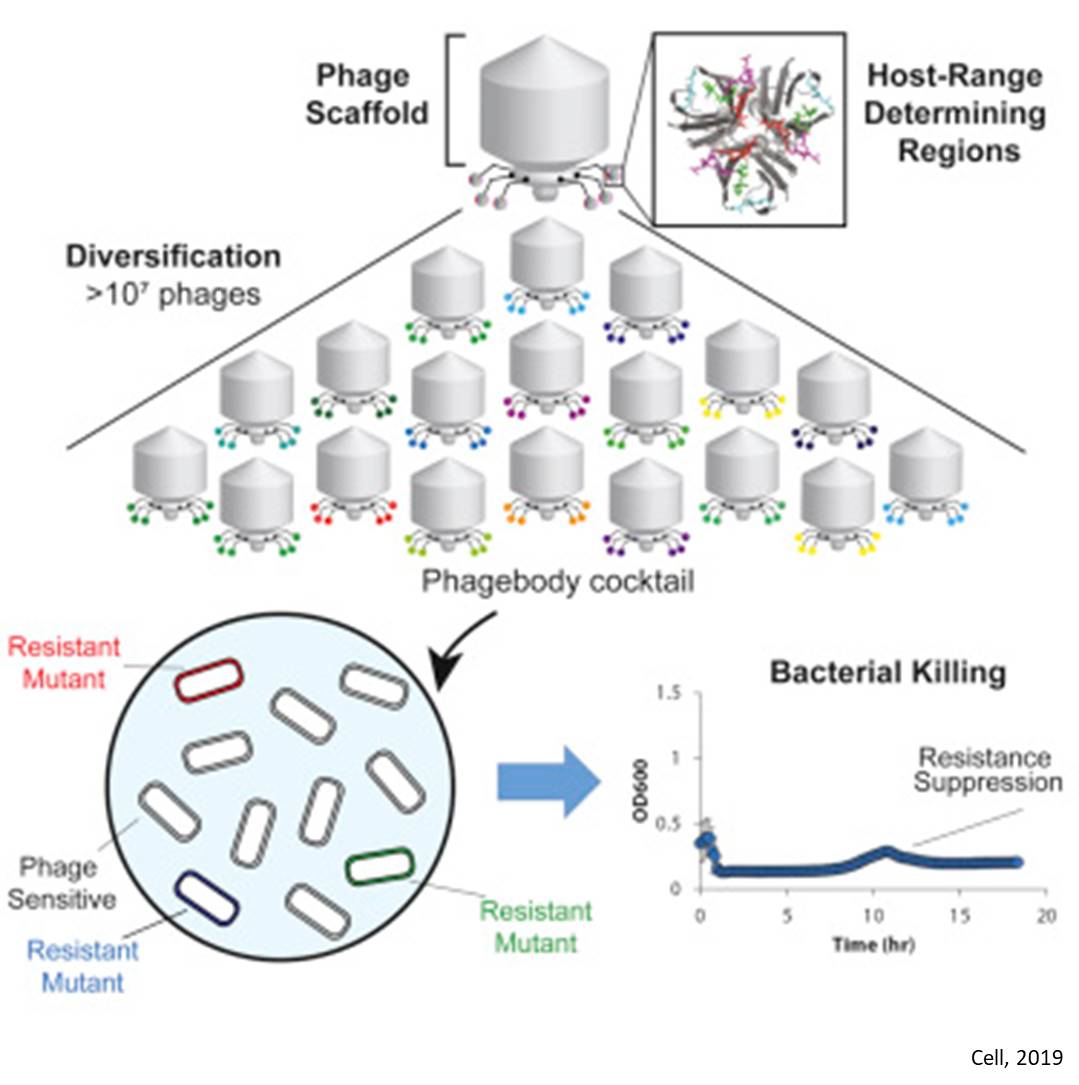 In the battle against antibiotic resistance, many scientists have been trying to deploy naturally occurring viruses called bacteriophages that can infect and kill bacteria.

Bacteriophages kill bacteria through different mechanisms than antibiotics, and they can target specific strains, making them an appealing option for potentially overcoming multidrug resistance. However, quickly finding and optimizing well-defined bacteriophages to use against a bacterial target is challenging.

In a new study, biological engineers showed that they could rapidly program bacteriophages to kill different strains of E. coli by making mutations in a viral protein that binds to host cells. These engineered bacteriophages are also less likely to provoke resistance in bacteria, the researchers found.

"As we're seeing in the news more and more now, bacterial resistance is continuing to evolve and is increasingly problematic for public health," says the senior author. "Phages represent a very different way of killing bacteria than antibiotics, which is complementary to antibiotics, rather than trying to replace them."

The researchers created several engineered phages that could kill E. coli grown in the lab. One of the newly created phages was also able to eliminate two E. coli strains that are resistant to naturally occurring phages from a skin infection in mice.

The Food and Drug Administration has approved a handful of bacteriophages for killing harmful bacteria in food, but they have not been widely used to treat infections because finding naturally occurring phages that target the right kind of bacteria can be a difficult and time-consuming process.

To make such treatments easier to develop, the lab has been working on engineered viral "scaffolds" that can be easily repurposed to target different bacterial strains or different resistance mechanisms.

In 2015, the researchers used a phage from the T7 family, which naturally kills E.coli, and showed that they could program it to target other bacteria by swapping in different genes that code for tail fibers, the protein that bacteriophages use to latch onto receptors on the surfaces of host cells.

While that approach did work, the researchers wanted to find a way to speed up the process of tailoring phages to a particular type of bacteria. In their new study, they came up with a strategy that allows them to rapidly create and test a much greater number of tail fiber variants.

From previous studies of tail fiber structure, the researchers knew that the protein consists of segments called beta sheets that are connected by loops. They decided to try systematically mutating only the amino acids that form the loops, while preserving the beta sheet structure.

"We identified regions that we thought would have minimal effect on the protein structure, but would be able to change its binding interaction with the bacteria," the lead author says.

They created phages with about 10,000,000 different tail fibers and tested them against several strains of E. coli that had evolved to be resistant to the nonengineered bacteriophage. One way that E. coli can become resistant to bacteriophages is by mutating "LPS" receptors so that they are shortened or missing, but the team found that some of their engineered phages could kill even strains of E. coli with mutated or missing LPS receptors.

The authors now plan to apply this approach to targeting other resistance mechanisms used by E. coli, and they also hope to develop phages that can kill other types of harmful bacteria. "This is just the beginning, as there are many other viral scaffolds and bacteria to target," the lead says. The researchers are also interested in using bacteriophages as a tool to target specific strains of bacteria that live in the human gut and cause health problems.

"Being able to selectively hit those nonbeneficial strains could give us a lot of benefits in terms of human clinical outcomes,"the senior author says.