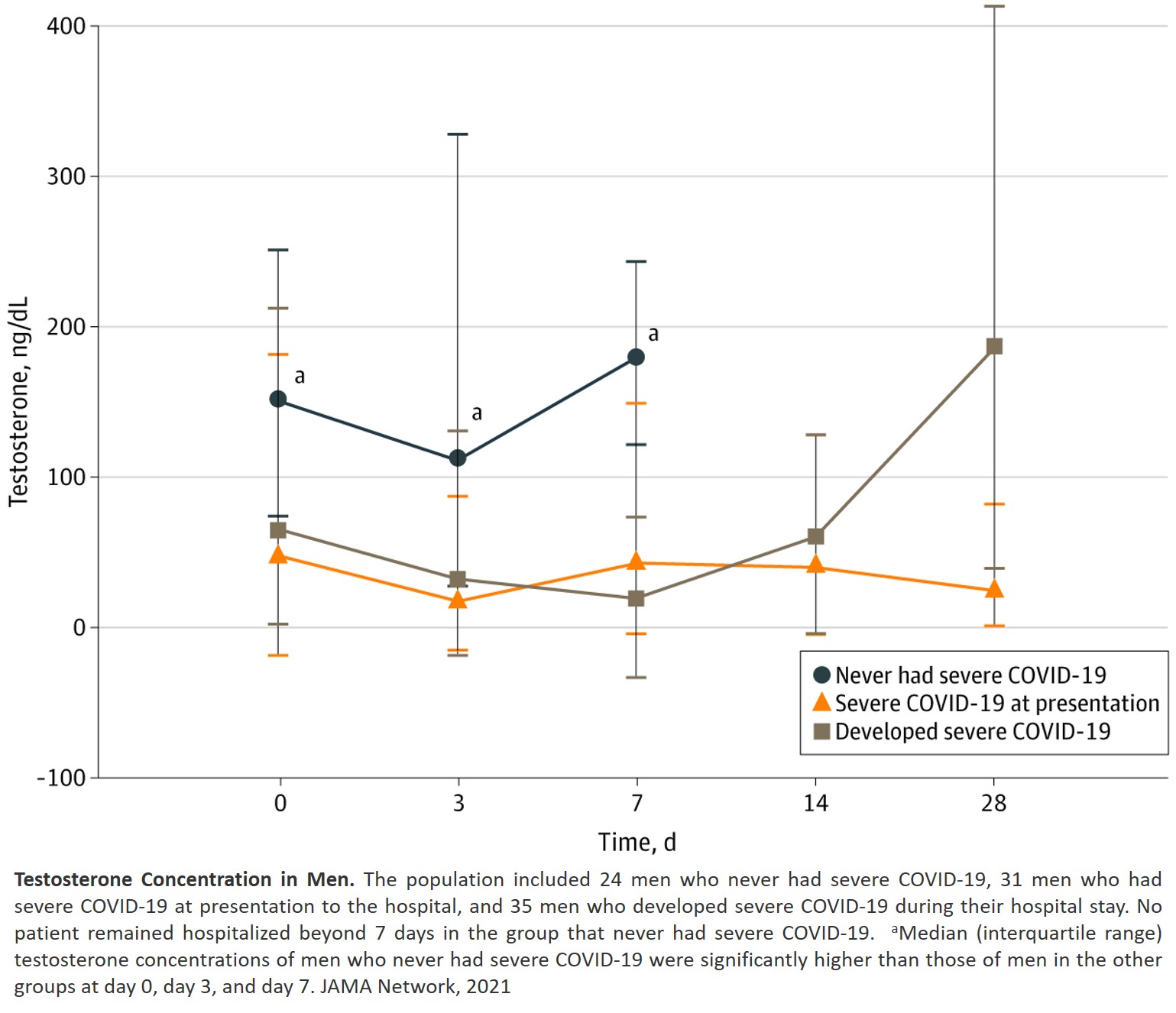 Throughout the pandemic, doctors have seen evidence that men with COVID-19 fare worse, on average, than women with the infection. One theory is that hormonal differences between men and women may make men more susceptible to severe disease. And since men have much more testosterone than women, some scientists have speculated that high levels of testosterone may be to blame.

But a new study suggests that, among men, the opposite may be true: that low testosterone levels in the blood are linked to more severe disease. The study could not prove that low testosterone is a cause of severe COVID-19; low levels could simply serve as a marker of some other causal factors. Still, the researchers urge caution with ongoing clinical trials investigating hormonal therapies that block or lower testosterone or increase estrogen as a treatment for men with COVID-19.

"During the pandemic, there has been a prevailing notion that testosterone is bad," said senior author. "But we found the opposite in men. If a man had low testosterone when he first came to the hospital, his risk of having severe COVID-19 -- meaning his risk of requiring intensive care or dying -- was much higher compared with men who had more circulating testosterone. And if testosterone levels dropped further during hospitalization, the risk increased."

The researchers measured several hormones in blood samples from 90 men and 62 women who came to Barnes-Jewish Hospital with symptoms of COVID-19 and who had confirmed cases of the illness. For the 143 patients who were admitted to the hospital, the researchers measured hormone levels again at days 3, 7, 14 and 28, as long as the patients remained hospitalized over these time frames. In addition to testosterone, the investigators measured levels of estradiol, a form of estrogen produced by the body, and IGF-1, an important growth hormone that is similar to insulin and plays a role in maintaining muscle mass.

The lower the levels of testosterone, the more severe the disease. For example, those with the lowest levels of testosterone in the blood were at highest risk of going on a ventilator, needing intensive care or dying. Thirty-seven patients -- 25 of whom were men -- died over the course of the study.

The researchers noted that other factors known to increase the risk of severe COVID-19, including advanced age, obesity and diabetes, also are associated with lower testosterone. "The groups of men who were getting sicker were known to have lower testosterone across the board," said first author. "We also found that those men with COVID-19 who were not severely ill initially, but had low testosterone levels, were likely to need intensive care or intubation over the next two or three days. Lower testosterone levels seemed to predict which patients were likely to become very ill over the next few days."

In addition, the researchers found that lower testosterone levels in men also correlated with higher levels of inflammation and an increase in the activation of genes that allow the body to carry out the functions of circulating sex hormones inside the cells. In other words, the body may be adapting to less testosterone circulating in the bloodstream by dialing up its ability to detect and use the hormone. The researchers don't yet know the implications of this adaptation and are calling for more research.

"We are now investigating whether there is an association between sex hormones and cardiovascular outcomes in long COVID-19, when the symptoms linger over many months," said the senior author. "We also are interested in whether men recovering from COVID-19, including those with long COVID-19, may benefit from testosterone therapy. This therapy has been used in men with low levels of sex hormones, so it may be worth investigating whether a similar approach can help male COVID-19 survivors with their rehabilitation."