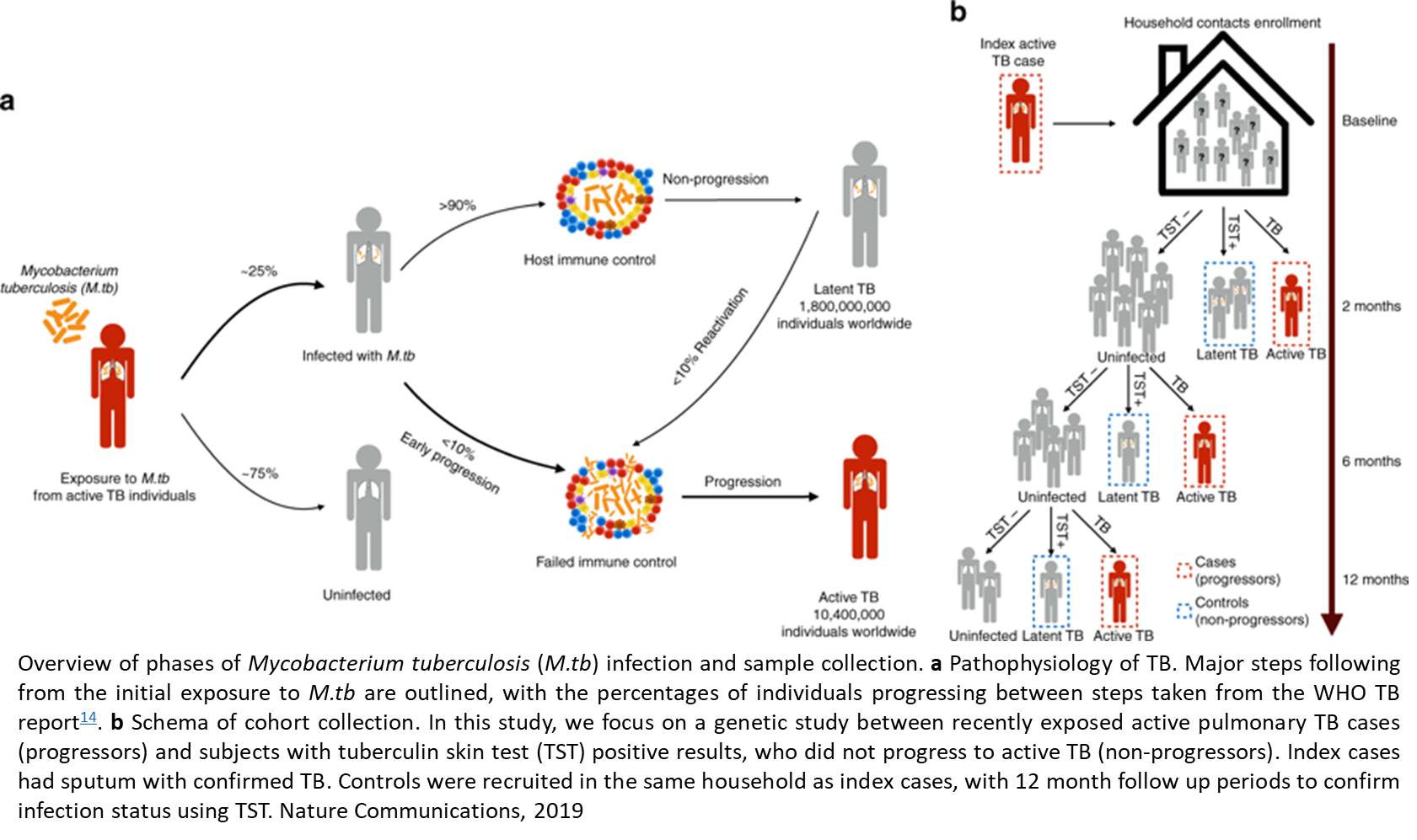 While the vast majority of the 1.8 billion people infected with the TB bacterium never experience active disease, an estimated 5 to 15 percent do develop full-blown infections--roughly half of them within 18 months of exposure.

Why do some people develop overt disease soon after infection, while others harbor silent infections for decades and remain apparently healthy?

It's a question that has continued to mystify microbiologists, infectious disease specialists and public health experts on the forefront of the fight against TB, which continues to claim more lives globally than any other infectious pathogen.

Now, a study by scientists offers an answer: Some of the risk for early disease progression is driven by several gene variants, at least one of which controls key immune functions.

The research, published in Nature Communications, is believed to be the first large-scale study to explore the genetic underpinnings of early TB progression among people living in the same households with confirmed active and latent infections. This was a particular strength of the study, the research team said, because it ensured a meaningful and direct comparison allowing scientists to distinguish between infected progressors and infected non-progressors.

To be sure, researchers added, this is not the whole story, and more genes will likely be uncovered as drivers of early disease progression. These genes, they said, are likely spread across many areas of the genome, as is the case with other disorders such as cardiovascular disease or diabetes--multifactorial diseases that arise from mutations in multiple genes and are influenced by environmental and lifestyle factors.

Early progression to active TB disease soon after infection with the bacterium is physiologically different from late-onset disease, which develops after years or decades of dormancy, typically as a result of aging or immunosuppression.

The study, which involved people infected with TB in Lima, Peru, pinpoints the precise genetic region that interferes with immune control and leads to early progression. In doing so, the research confirms the role of gene-mediated immunity in disease development after TB infection. Additionally, the study points to the different genetic basis for early versus late-onset TB, underscoring how fundamentally different the two forms of the disease are.

"The purpose of our study was to characterize genetic differences between people who develop TB soon after they have been infected and those who do not progress to overt disease," said study co-senior investigator. "Our results indicate that early TB progression is a highly heritable trait and one that is genetically distinct from TB reactivation after years of dormancy."

The researchers started out by examining publicly available whole-genome data sets of Peruvian people. They homed in on tiny areas of the DNA known as single-nucleotide polymorphisms, or SNPs (pronounced "snips"). Each SNP represents a difference of a single nucleotide--or a single letter in the genomic alphabet. SNPs can alter the function of genes, as well as the regulatory sequences in which they are found. To enhance the accuracy of their analysis, the researchers identified SNPs specific to Peruvian populations, adapting their genotyping tests to reflect this population-specific variation.

Next, the investigators obtained DNA samples from more than 2,000 people with active TB infections and 2,000 people who lived in the same households who also were infected with TB but had no active disease. To confirm that the apparently disease-free housemates had, indeed, been infected with TB, the researchers screened them using a standard TB skin test, blood tests and X-ray imaging of the lungs to check for the presence of TB in the body. The researchers repeated these tests at two, six and 12 months. This approach allowed the scientists to compare genetic risk among individuals who shared the same environment and had the same or very similar disease exposures.

The analysis traced the epicenter of susceptibility to a region on chromosome 3 involved in regulating the expression of ATP1B3, a protein known to influence the function of immune cells called monocytes, which have critical functions in innate immunity ranging from detecting the presence of viral and bacterial invaders to the detection and destruction of defective or infected cells.

The researchers hypothesize that the gene variant interferes with the expression of the protein that regulates monocyte function, interfering with the immune cells' ability to perform key functions, thus boosting the risk for early TB progression.

There were associations suggestive of early progression with other areas of the genome in the region of the human leukocyte antigen complex, which encodes proteins that are a key part of the immune system. This complex is involved in distinguishing human proteins from those of foreign intruders such as bacteria and viruses.

"The risk regions that we identified may play a vital role in the immune responses for TB progression, but they may not be the end of the story," said lead author. Many more DNA regions driving susceptibility to early disease progression are likely to be found as the sizes of genetic samples and related studies continue to increase, the author added.

"There may be lots of other alleles with weaker effects spread around the genome," another author said. For comparison, genetic variation appears to account for 28 percent of cases of Crohn's disease. Genome-wide association studies have identified around 200 alleles that contribute to this variation in genetic risk of Crohn's, the researchers said.

Infections, especially chronic infectious diseases, play out in highly distinct phases, the team said, and the new study identifies some of the genetic drivers behind one of these phases.

How your mind protects you against hallucinations