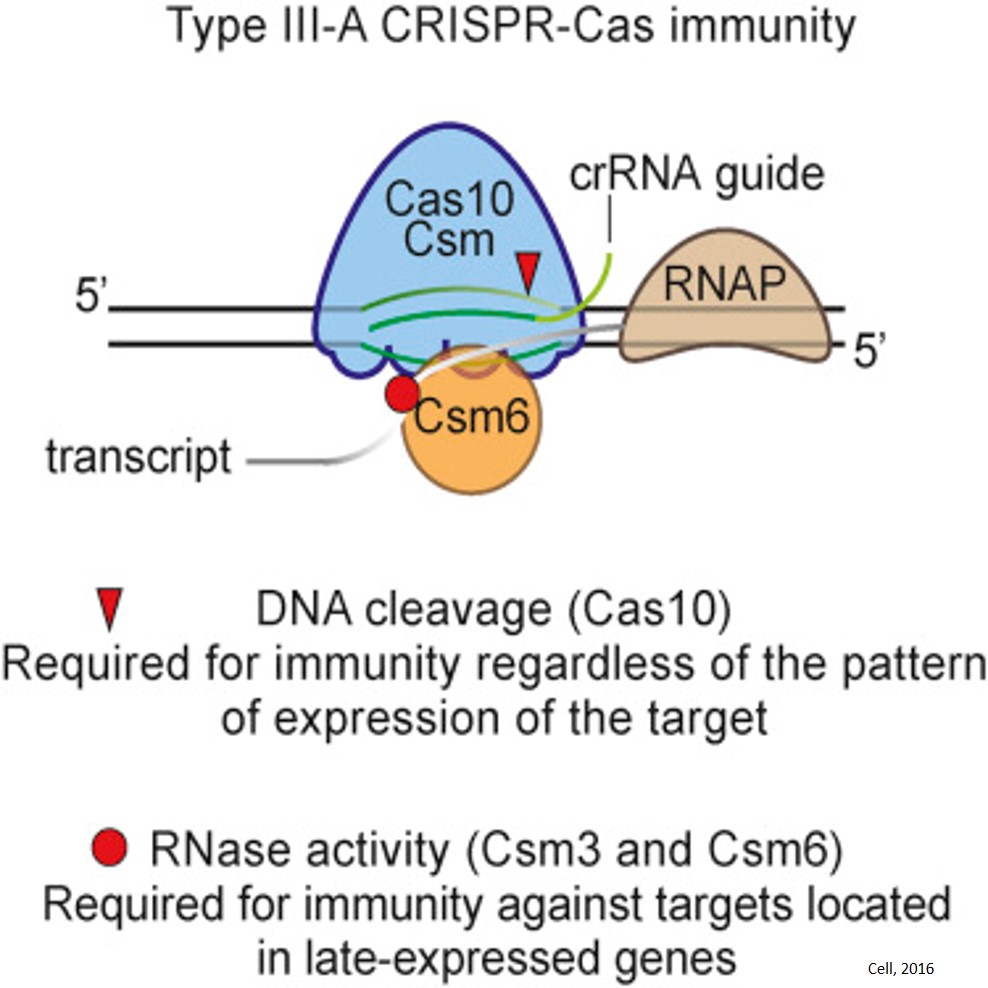 When seeking to protect themselves from viruses, some bacteria use a seemingly risky strategy: They wait until the invading virus has already begun to replicate. The research, published   in Cell, helps explain how bacteria manage to clear a harmful infection in spite of their slow response.

The study zeroes-in on two enzymes, Csm3 and Csm6, which are part of a bacterial immune system known as CRISPR-Cas. When these enzymes swing into action during the late phase of infection, they cut up viral RNA.

The CRISPR (clustered regularly interspersed short palindromic repeats) system is a type of adaptive bacterial immune response that relies on sections of DNA containing sequences matching those in viral genetic code. CRISPR-associated genes use these sequences as guides to target invaders for destruction.

Typically, CRISPR defense systems attack and destroy the viral DNA within minutes after it has been injected into the bacterial cell, so the invading virus doesn’t get a chance to replicate. However, the specific type of CRISPR investigated in the study—called type III CRISPR-Cas system—waits for the virus to replicate and mounts its attack during a later phase of the infection, after the viral DNA has been copied and is being transcribed into RNA.

“It appears that type III CRISPR-Cas actually needs the virus to produce RNA before it can target and destroy the viral DNA,” says a graduate student who is the paper’s first author. “As a result, the system has to deal with hundreds of viral DNA strands instead of one, and can take up to nine hours instead of minutes to clear the infection.”There is an inherent peril in waiting until this point, and because of the large number of viral genomes present, the typical DNA-cutting enzymes employed by CRISPR-Cas systems can’t stop the infection alone. So, type III CRISPR-Cas also uses the enzymes Csm3 and Csm6 to target the viral RNA, the researchers found.

To observe this RNA-focused defense in action, researchers generated a mutated form of Staphylococcus epidermidis bacteria that lacked the Csm3 and Csm6 enzymes. When they infected both the mutant and the normal bacteria with a virus, the mutant population succumbed to it.

The research clarifies how this CRISPR-Cas strategy functions, and also has potential implications for biotechnology and medicine. Because it can make precisely targeted cuts on genomes, CRISPR’s DNA-cleaving abilities have proved useful in developing genetic engineering techniques. Understanding how CRISPR RNA-cutting enzymes work may be useful to manipulate the RNA content of human cells.

“The study also advances our knowledge about how bacteria interact with their viruses, which is essential for understanding bacterial pathogenesis,” says the author. “The viral genetic material can increase the virulence of pathogens, and at the same time viruses can be used to kill pathogenic bacteria in the clinic. Understanding the molecular mechanisms at play in the bacteria–virus interactions can help us combat infectious disease.”