How HIV enters the nucleus 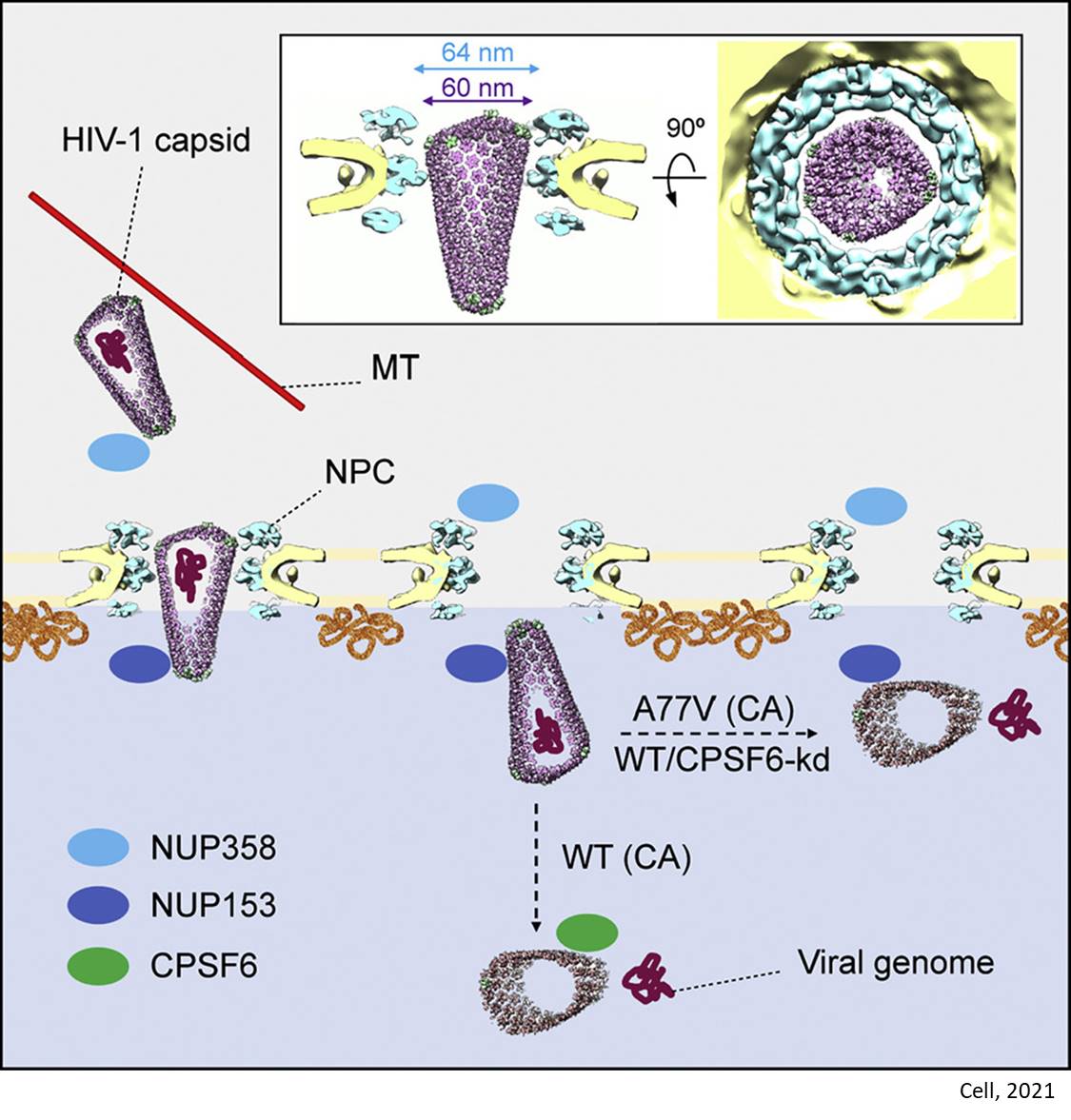 Scientists have succeeded for the first time in imaging HIV during transport into the nucleus of an infected cell. The electron tomographic images show the protein envelope of the virus passing through one of the nuclear pores - the openings in the membrane around the nucleus that allow molecules in and out. The scientists found that the virus passes through the nuclear pore intact, only breaking apart inside the nucleus, where it releases its genetic information. This clarifies an important mechanism by which the virus's genetic material is integrated into the genome of the infected cell.

The human immunodeficiency virus type 1 (HIV-1) - which was the focus of this study - primarily infects certain cells of the immune system, and in this way massively weakens the body's own defence against diseases. The genetic material of the virus is securely packaged in a cone-shaped protein capsule known as the capsid, which is composed of individual hexagonal parts. Scientists knew how the capsid passes through the cell membrane into the interior of the cell during infection, but not how the virus's genetic material gets from the capsid into the cell nucleus, where it triggers the formation of new viruses.

The authors demonstrated that the diameter of the nuclear pore complex  is sufficient for the import of apparently intact, cone-shaped capsids. Subsequent to nuclear import, they detected disrupted and empty capsid fragments, indicating that uncoating of the replication complex occurs by breaking the capsid open, and not by disassembly into individual subunits.

Using newly developed methods for 3D imaging of molecular complexes in virus-infected cells, the scientists succeeded in imaging the viral capsid directly during transport into the nucleus. "Until now, it was assumed that the capsid does not fit through the pores," explains the senior author. "However, the question of how the viral genome gets into the cell nucleus is essential for its reproduction. Our results therefore support the search for new targets for future therapeutic approaches." Although current treatment options can suppress multiplication of the virus in the body, a true cure that eliminates the virus is not yet possible.

To get a detailed look at the inner workings of infected immune cells in the laboratory, the scientists used high-resolution imaging techniques. With the help of the Electron Microscopy they combined light and electron microscopy methods. They were able to reconstruct 3D images of the molecular structures from their data. This allowed them to visualise the composition and architecture of the viral complexes and their interaction with cellular structures in high resolution.