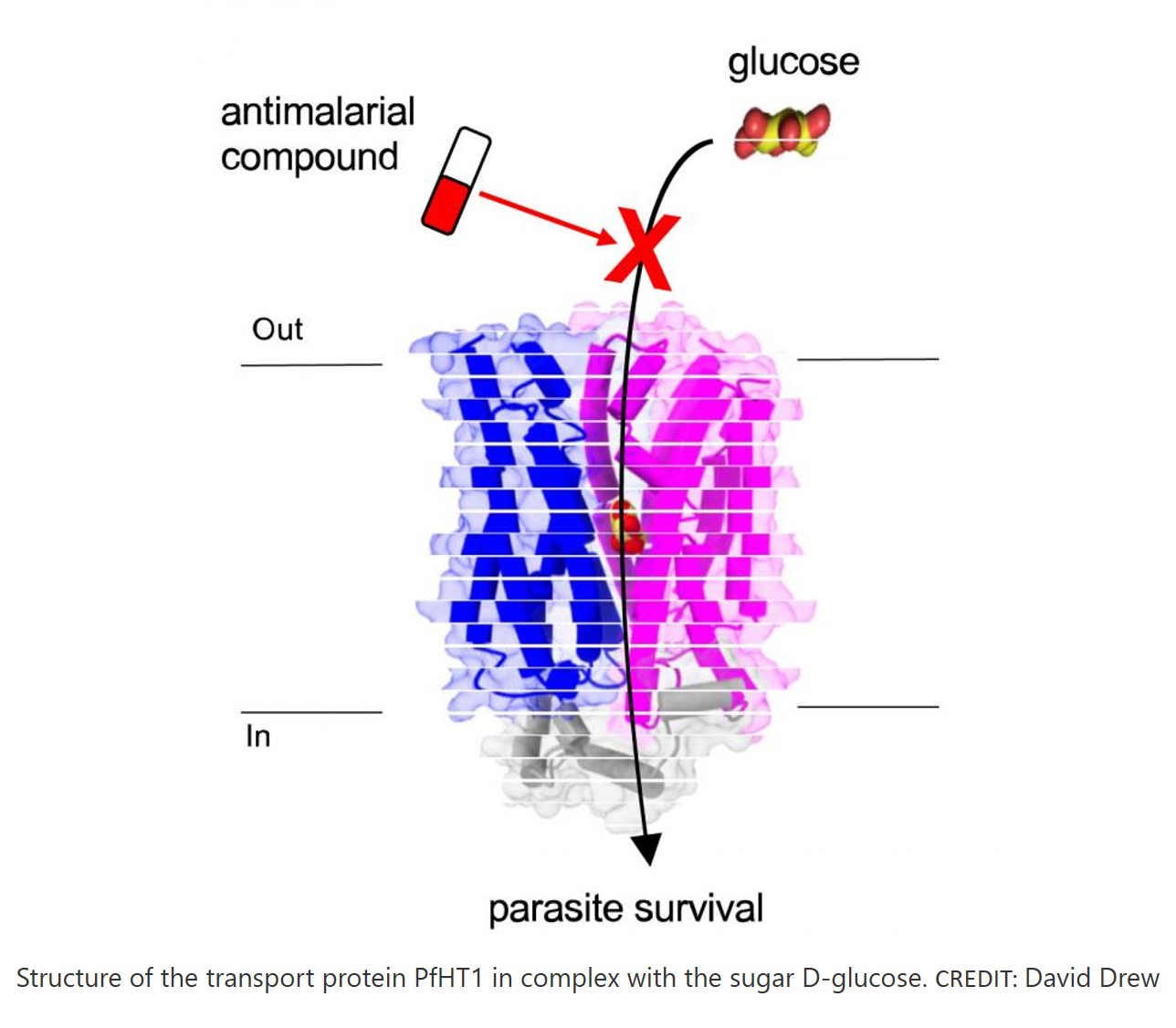 The consumption of sugar is a fundamental source of fuel in most living organisms. In the malaria parasite Plasmodium falciparum, the uptake of glucose is essential to its life cycle. Like in other cells, sugar is transported into the parasite by a transport protein - a door designed for sugar to pass through the cell membrane. The details in how this door works has now been revealed.

"By elucidating the atomic structure of the sugar-transporting-protein PfHT1, we can better understand how glucose is transported into the parasite", says the lead author of the study.

The main goal of the research is basic understanding of this important biological process, but with the potential for development of new antimalarial drugs. Malaria kills almost half a million persons each year, according to the WHO. By blocking the door for sugar, it has been shown that one can stop the growth of the malaria parasites.

"It's a long process from a compound with antimalarial activity to a drug that can be taken in the clinic. However, with this knowledge one can improve known antimalarial compounds so that they are more specific to the malarial transporter, so they do not have the side-effect of stopping sugar transport into our own cells. As such, this knowledge increases the likelihood that more specific compounds can be developed into a successful drug", says the author.

Despite million's years of evolution between parasites and humans the research show that glucose is surprisingly captured by the sugar transporting protein in malaria parasites in a similar manner as by transporters in the human brain.

"This conservation reflects the fundamental importance of sugar uptake - basically, nature hit on a winning concept and stuck with it", says the author.

The authors found that the sugar-binding site in PfHT1 is very similar to those of the distantly related GLUT3 and GLUT5 structures. Nevertheless, engineered PfHT1 mutations made to match GLUT sugar-binding sites did not shift sugar preferences. The extracellular substrate-gating helix TM7b in PfHT1 was positioned in a fully occluded conformation, providing a unique glimpse into how sugar binding and gating are coupled.

The authors determined that polar contacts between TM7b and TM1 (located about 15 Å from D-glucose) are just as critical for transport as the residues that directly coordinate D-glucose, which demonstrates a strong allosteric coupling between sugar binding and gating. They conclude that PfHT1 has achieved substrate promiscuity not by modifying its sugar-binding site, but instead by evolving substrate-gating dynamics.

However, the malaria parasite is more flexible. Other sugars, such as fructose, can also be imported. This flexibility could give a selective advantage to the malaria parasite so that it can survive under conditions when its preferred energy source glucose is unavailable.