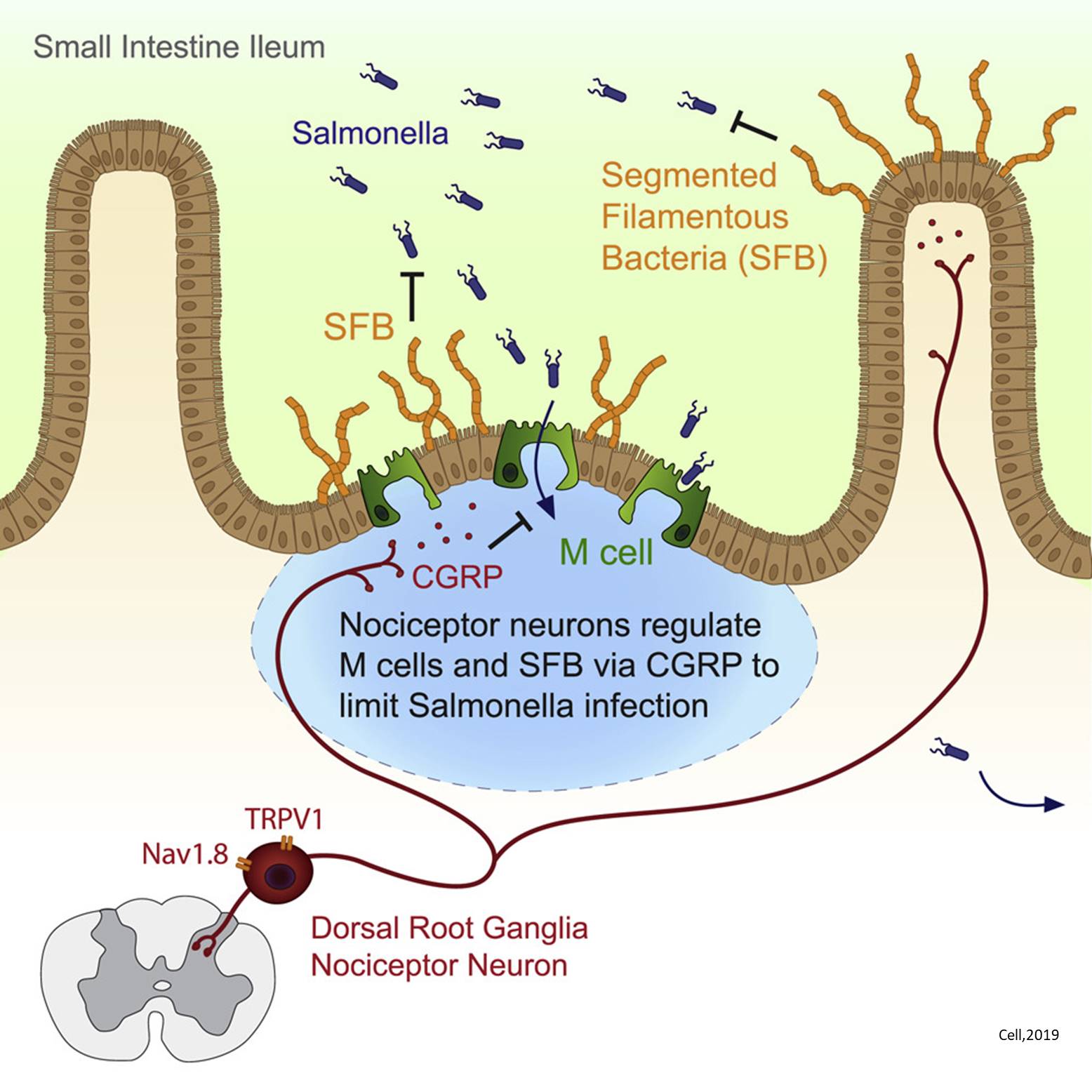 New research has found that nerves in the guts of mice do not merely sense the presence of Salmonella but actively protect against infection by this dangerous bacterium by deploying two lines of defense.

The study, which will be published in Cell, casts in a new light the classic view of the nervous system as a mere watchdog that spots danger and alerts the body to its presence. The results show that by directly interfering with Salmonella's ability to infect the intestines, the nervous system is both a detector of danger and a defender against it.

"Our results show the nervous system is not just a simple sensor-and-alert system," said neuro-immunologist and lead investigator. "We have found that nerve cells in the gut go above and beyond. They regulate gut immunity, maintain gut homeostasis and provide active protection against infection."

Specifically, the experiments reveal that pain-sensing neurons embedded in the small intestine and beneath cells called Peyer's patches are activated by the presence of Salmonella, a foodborne bacterium responsible for a quarter of all bacterial diarrheal disease worldwide.

Once activated, the nerves use two defensive tactics to prevent the bug from infecting the intestine and spreading throughout the rest of the body. First, they regulate the cellular gates that allow microorganisms and various substances to go in and out of the small intestine. Second, they boost the number of protective gut microbes called SFB (segmented filamentous bacteria), which are part of the microbiome in the small intestine.

Under normal conditions, Peyer's patches--clusters of lymphatic and immune tissue found exclusively on the wall of the small intestine--scan the environment, sample substances and determine what can go into the intestine. To perform this function, Peyer's patches are studded with microfold cells, or M cells, which are cellular channels that open and close to regulate influx of substances and microorganisms into the intestine. M cells are the major entry points that Salmonella and other dangerous bacteria exploit to invade the small intestine. To do so, the Salmonella bacterium injects into the gut transcription factors that stimulate intestinal cells to become M cells. Next, Salmonella latches onto sugars sitting atop the M cells--the cellular gates--and uses its tentacles to prop the gates open. The bacterium then wiggles its way into the intestine.

To understand the role of pain-sensing gut neurons in infection protection, researchers compared how mice with and without them responded to Salmonella. One group of mice had intact gut neurons, another group had these neurons genetically disabled or deleted, and yet another cohort had them chemically disabled.

Experiments showed that in the presence of Salmonella, gut neurons fire back by releasing a neurochemical called CGRP, which slows down M cell differentiation, thereby reducing the number of entry points that Salmonella can use. Additionally, the experiments show, gut neurons launch another form of defense. By releasing CGRP, they boost the presence of SFB microbes--microorganisms that, among performing other beneficial functions, also guard against Salmonella invasion. Precisely how they do so remains unclear, but the authors say one plausible mechanism may be that SFB uses its tiny little hooks to attach itself to the intestinal wall and form a repellent coating that shields against the disease-causing bacteria.

Both defense mechanisms functioned reliably in mice with intact gut neurons. Not so, however, in animals that lacked these gut neurons. Indeed, intestinal biopsies from mice with inactivated neurons showed their Peyer's patches more densely infiltrated by Salmonella at a greater rate than animals with intact neurons. The neuron-deficient animals also had fewer protective SFB microbes in their guts. Not surprisingly, these mice got sick from Salmonella at a greater rate and had more widespread disease than mice with intact nerve fibers.

"It is becoming increasingly clear that the nervous system interacts directly with infectious organisms in various ways to affect immunity," the author said. "Bacteria literally do get on our nerves."

The findings are in line with past research by the group showing a powerful three-way interplay between infection and the nervous and the immune systems. But in contrast to the new findings, the previous work showed that the nervous system can, at times, be exploited by infectious organisms to their advantage. For example, the group's previous research found that nerves in the lungs can alter immune response in serious lung infections with the bacterium Staphylococcus aureus, commonly known as staph. In another study, the team discovered that the bacterium that can cause flesh-eating disease hijacks nerves as a way to dampen immune defenses and weaken the body's defenses.

The new findings add to a growing body of knowledge showing that the nervous system has a repertoire far broader than signaling to and from the brain.

"Our findings illustrate an important cross talk between the nervous system and the immune system," said study first author. "It is clearly a bidirectional highway with both systems sending messages and influencing each other to regulate protective responses during infection."

Indeed, the gut contains so many nerves that it has often been called the second brain. As an alert system designed to warn the body of looming threats, the nervous system acts ultrafast. Thus, the new findings, the researchers said, suggest that evolution has taken advantage of this feature for added protection.

The researchers say their findings could also help explain previous observations showing that the use of opioids--which silence pain-sensing nerve fibers--and other nerve-modulating drugs can make people more prone to infections.

"If you dial down nerve signaling in an effort to reduce pain, you may be inadvertently also dampening their protective abilities," the senior author said. "Our observations support that idea."

The interaction between gut neurons and gatekeeping M cells represents an area ripe for future research, the team said, because M cells--the molecular gates of the small intestine--are also exploited by other organisms that cause serious human disease, including the bacteria E. coli, Shigella and Yersinia, as well as prions, self-propagating clumps of misfolded protein that can cause rare but universally fatal neurodegenerative conditions.

The results also point to a possible therapeutic pathway that involves modulating nerve signaling either for boosting gut immunity or intestinal inflammation.

"The idea would be that if we could somehow stimulate these protective gut neurons or mimic their activity with a drug, we could activate the immune response and increase the body's ability to fend off infection," the senior author said.