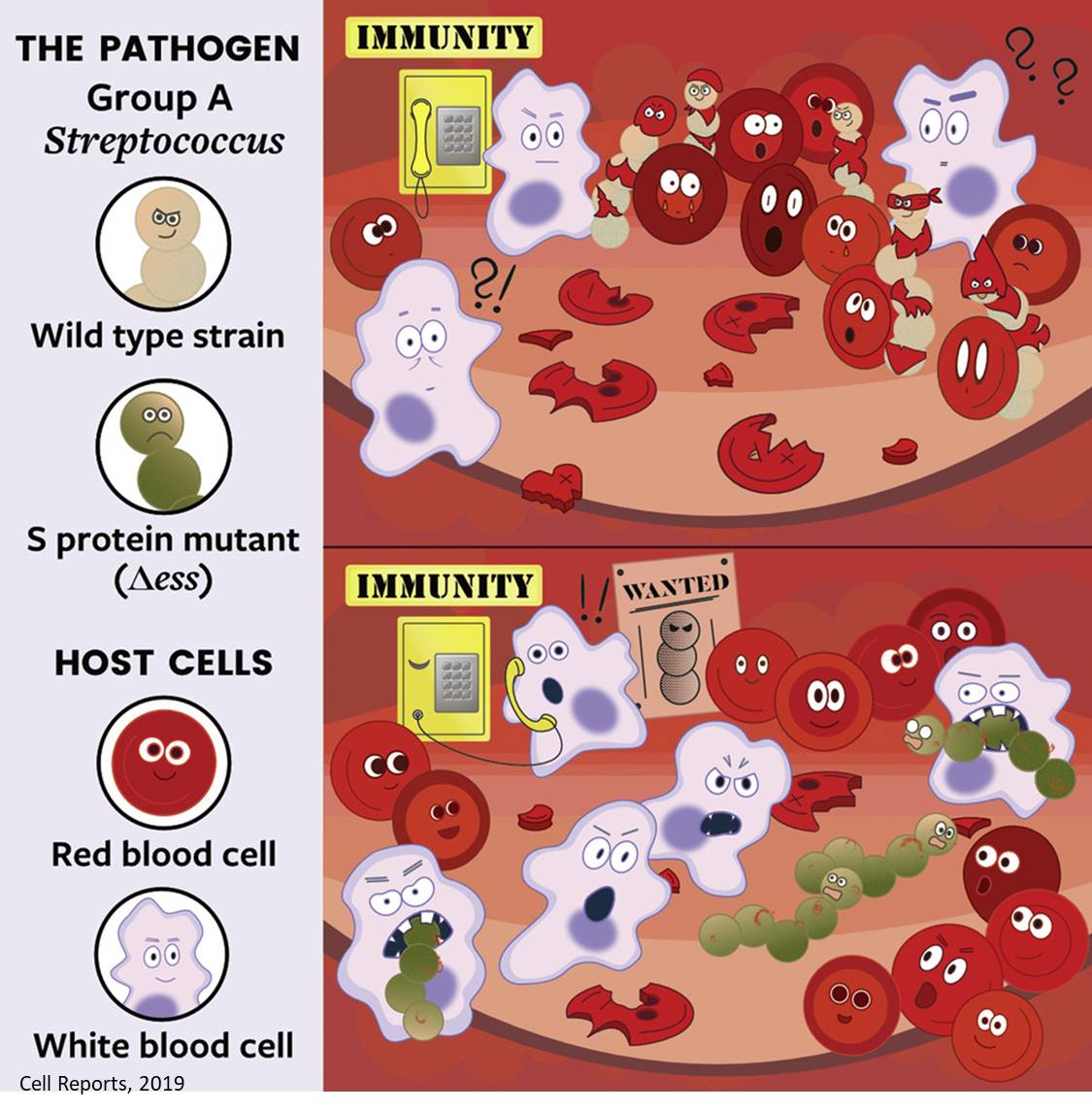 A bacterial pathogen that causes strep throat and other illnesses cloaks itself in fragments of red blood cells to evade detection by the host immune system, according to a study published in the journal Cell Reports. The researchers found that Group A Streptococcus (GAS) produces a previously uncharacterized protein, named S protein, which binds to the red blood cell membrane to avoid being engulfed and destroyed by phagocytic immune cells. By arming GAS with this form of immune camouflage, S protein enhances bacterial virulence and decreases survival in infected mice.

"Our study describes a completely novel mechanism for immune evasion," says corresponding author. "We believe the discovery of this previously overlooked virulence factor, S protein, has broad implications for development of countermeasures against GAS."

GAS is a human-specific pathogen that can cause many different infections, from minor illnesses to very serious and deadly diseases. Some of these conditions include strep throat, scarlet fever, a skin infection called impetigo, toxic shock syndrome, and flesh-eating disease. An estimated 700 million infections occur worldwide each year, resulting in more than half a million deaths. Despite active research, a protective vaccine remains elusive.

To date, penicillin remains a primary drug of choice for combatting GAS infections. But the rate of treatment failures with penicillin has increased to nearly 40% in certain regions of the world. "Due to the high prevalence of GAS infection and the decreasing efficacy of the available set of countermeasures, it is critical to investigate alternative approaches against GAS infection," the senior author says.

One alternative approach is to develop novel anti-virulence therapeutics. To avoid immune clearance, GAS expresses a wide variety of molecules called virulence factors to facilitate survival during infection. But the function of many of these proteins remains unknown, hindering the development of alternative pharmacological interventions to combat widespread antibiotic resistance.

To address this gap in knowledge, the authors used a nanotechnology-based technique called biomimetic virulomics to identify proteins that are secreted by GAS and bind to red blood cells. This approach revealed a previously uncharacterized protein, which the researchers named S protein, because this type of protein is limited to members of the Streptococcus genus.

The researchers found that a mutant bacterial strain lacking S protein was less able to grow in human blood, and less able to bind to red blood cells, compared to the non-mutated strain. The mutant strain was also more readily captured and killed by phagocytic immune cells called macrophages and neutrophils. In addition, the absence of S protein vastly reshaped the bacterial protein landscape, decreasing the abundance of many known virulence factors.

Additional experiments showed that infection with GAS caused a progressive decline in the body weight of mice and a 90% mortality rate. By contrast, all mice infected with mutant GAS lacking S protein survived infection, and their body weight stabilized and remained constant after a slight initial decline. Infection with mutant GAS also resulted in a lower concentration of bacteria in the bloodstream and organs, and promoted a robust immune response and immunological memory.

Currently, the team is examining the mechanism by which S protein binds to red blood cells. They are also studying the role that S protein plays in other important human pathogens, including Streptococcus pneumoniae, which causes pneumonia and other illnesses, as well as Group B Streptococcus or S. agalactiae--a bacterium that is a common cause of severe infections in newborns during the first week of life.

"Ultimately, the findings could lead to the development of a novel vaccine candidate," the senior author says. "Because of its pivotal roles in pathogenesis and immune evasion, and its conserved nature in Streptococci, S protein shows promising clinical potential as a target for the development of anti-virulence pharmacological interventions."