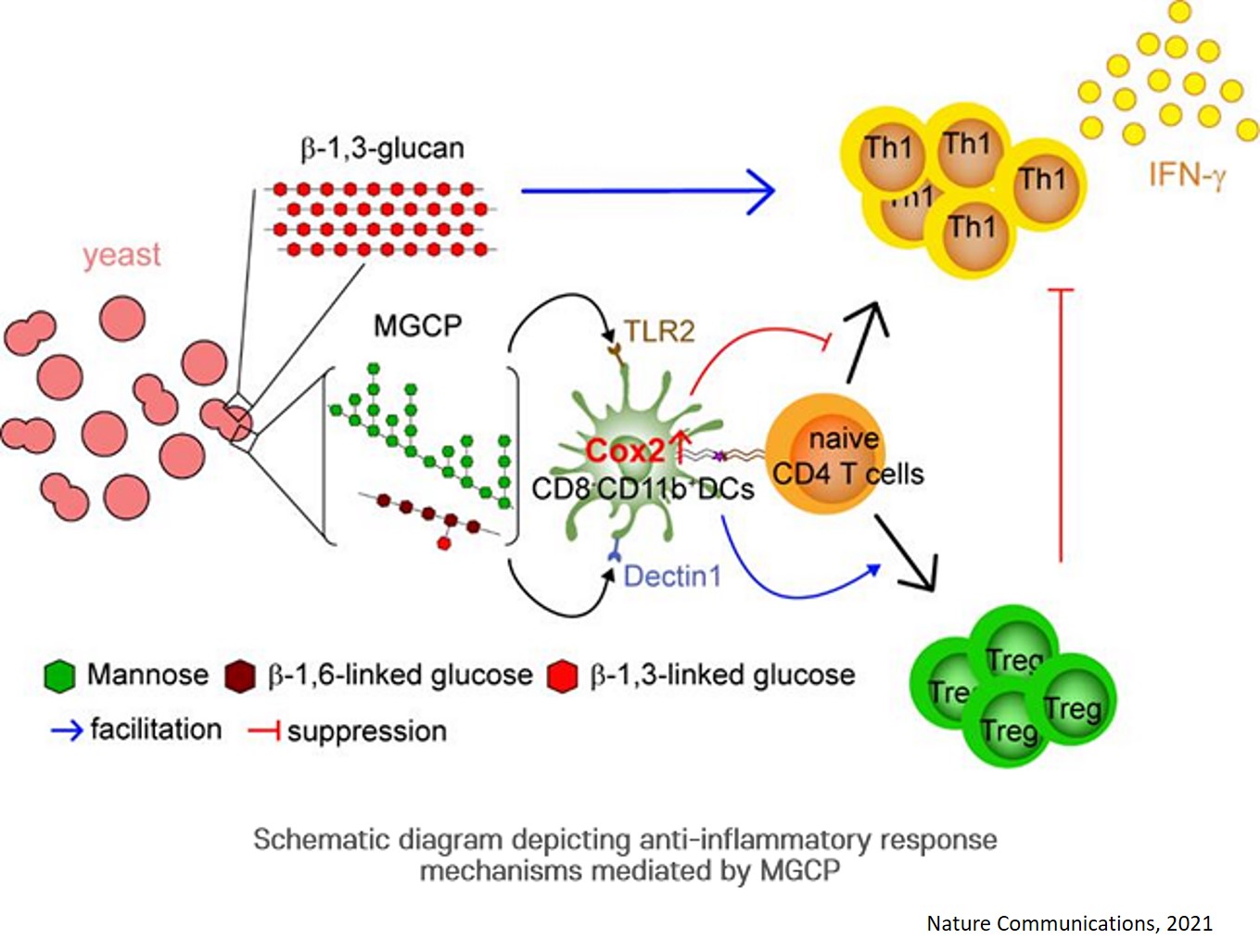 The development of therapeutic drugs for inflammatory bowel disease, an intractable immune disease, and multiple sclerosis - an autoimmune disorder - is gaining traction. A research team has uncovered that a yeast-derived polysaccharide mixture inhibits the onset and progression of immune disorders.

The exact cause of the inflammatory bowel disease and multiple sclerosis is still unknown but it is presumed that environmental and genetic factors play a role.

Various immune cells such as monocytes, macrophages, dendritic cells, and T cells are involved in the onset and development of these diseases, but T cells in particular play a pivotal role. Currently, agents that suppress the overall inflammatory response are used in clinical practice, but this method has major side effects including vulnerability to infections and there are no clear effective treatments as of now.

To this, the researchers focused on the microbiome and the active substances derived from them, which have a big impact on the development and regulation of the immune system. The joint research team isolated specific polysaccharides from yeast - one of the symbiotic microorganisms in the human body - and first observed their anti-inflammatory effects. Then, using high-performance liquid chromatography and nuclear magnetic resonance (NMR) techniques, the researchers identified the constituents and chemical structures of the polysaccharides and named it MGCP (Mannan/β-1,6-Glucan-containing polysaccharides).

Using a mouse model for inflammatory bowel disease and multiple sclerosis, MGCP-administered mice suppressed the generation of inflammatory cells, which are T helper type 1 cells (Th1 cells). On the other hand, it selectively inhibited the progression of inflammatory diseases by inducing the generation of regulatory T cells (Regulatory T cells, hereinafter Treg cells) with anti-inflammatory function. The researchers additionally confirmed that the mechanism of action of the immunosuppressive response by MGCP is mediated by TLR2 and Dectin1, which are the two different innate immune receptors expressed in dendritic cells.

This study also presents a clear solution to an unsolved immunological question about beta-glucan (β-glucan), which is known to suppress hypersensitivity while inducing immune enhancement at the same time. The research team has uncovered that the immune response enhancing effect of β-glucan identified so far is due to β-1,3-glucan, and found that β-1,6-glucan that makes up the MGCP has a hypersensitivity immunosuppressive effect. These findings show that β-glucan of a specific structure is applicable as an immune enhancing or anti-inflammatory response inducer. These active substances show promise to be developed into the next-generation microbiome treatment.

This study revealed that the immunological efficacy is determined by the chemical structure of the obscure polysaccharide, which was largely unknown. It is significant that a novel polysaccharide MGCP that effectively inhibits inflammatory diseases has been discovered. "We have successfully demonstrated that MGCP can selectively suppress inflammatory T-cells," explained the senior author. "This will help to provide a great turning point for a new anti-inflammatory treatment with no side effects that can selectively suppress the inflammatory response."

The findings from this research were published  in the journal Nature Communications.