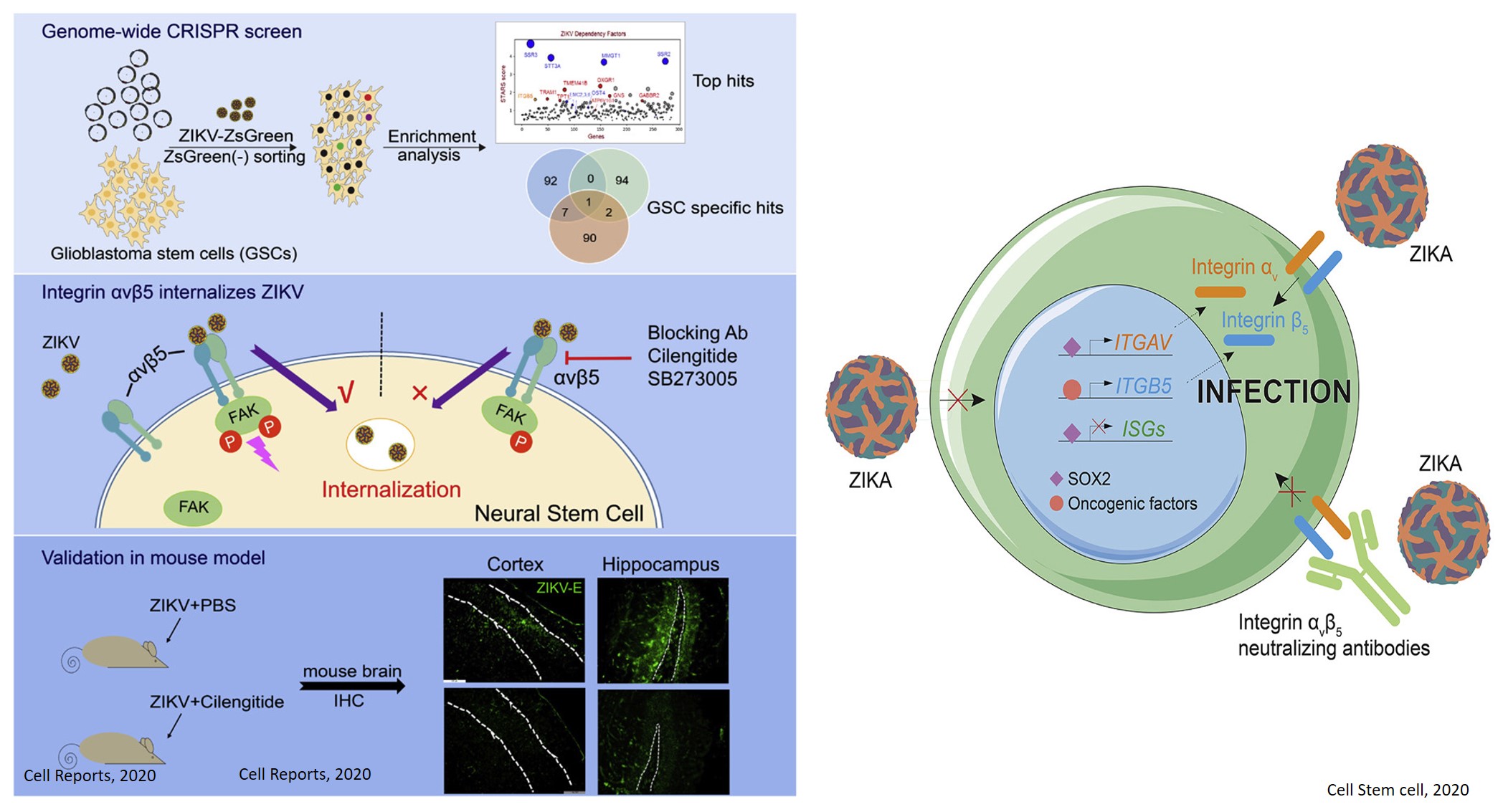 Zika virus infection can stunt neonatal brain development, a condition known as microcephaly, in which babies are born with abnormally small heads. To determine how best to prevent and treat the viral infection, scientists first need to understand how the pathogen gets inside brain cells.

In a pair of papers published by the researchers also found ways to take advantage of the integrin to both block Zika virus from infecting cells and turn it into something good: a way to shrink brain cancer stem cells.

Integrins are molecules embedded in cell surfaces. They play important roles in cell adherence and communication, and are known to be involved in cancer progression and metastasis. Several other integrins are known entry points for other viruses, including adenovirus, foot-and-mouth disease virus and rotavirus, but αvβ5 was not previously known for its role in viral infections.

One team used CRISPR gene editing to systematically delete every gene in a 3D culture of human glioblastoma (brain cancer) stem cells growing in a laboratory dish. Then they exposed each variation to Zika virus to determine which genes, and the proteins they encode, are required for the virus to enter the cells. The virus was -- for the first time -- labeled with green fluorescent protein (GFP) to allow the researchers to visualize viral entry into the cells.

Their study, published in Cell Reports, uncovered 92 specific human brain cancer stem cell genes that Zika virus requires to infect and replicate in the cells. But one gene stood out, the one that encodes αvβ5 integrin.

"Integrins are well known as molecules that many different viruses use as doorknobs to gain entry into human cells," the senior author said. "I was expecting to find Zika using multiple integrins, or other cell surface molecules also used by other viruses. But instead we found Zika uses αvβ5, which is unique. When we further examined αvβ5 expression in brain, it made perfect sense because αvβ5 is the only integrin member enriched in neural stem cells, which Zika preferentially infects. Therefore, we believe that αvβ5 is the key contributor to Zika's ability to infect brain cells."

The second study, published in Cell Stem Cell, found that many viruses use integrins for entry into human cells, The team inhibited each integrin with a different antibody to see which would have the greatest effect.

"When we blocked other integrins, there was no difference. You might as well be putting water on a cell," said the senior author. "But with αvβ5, blocking it with an antibody almost completely blocked the ability of the virus to infect brain cancer stem cells and normal brain stem cells."

The team followed up by inhibiting αvβ5 in a glioblastoma mouse model with either an antibody or by deactivating the gene that encodes it. Both approaches blocked Zika virus infection and allowed the treated mice to live longer than untreated mice. They also found that blocking the αvβ5 integrin in glioblastoma tumor samples removed from patients during surgery blocked Zika virus infection.

The team also blocked αvβ5 in mice, treating them daily with cilengitide or SB273005, two experimental cancer drugs that target the integrin. Six days after Zika virus infection, the brains of their drug-treated mice contained half as much virus as mock-treated mice.

"The neat thing is that these findings not only help advance the Zika virus research field, but also opens the possibility that we could similarly block the entry of multiple viruses that use other integrins with antibodies or small molecule inhibitors," senior author of the first paper said.

"It turns out that the very thing that helps cancer cells become aggressive cancer stem cells is the same thing Zika virus uses to infect our cells," the author said.

To see how this might play out in a more realistic model of human disease, the team partnered with an expert in human brain disease modeling and generated a new brain tumor model, where human glioblastoma tumors were transplanted into human brain organoids, laboratory "mini-brains" that can be used for drug discovery. The researchers discovered that Zika virus selectively eliminates glioblastoma stem cells from the brain organoids. Inhibiting αvβ5 integrin reversed that anti-cancer activity, further underscoring the molecule's crucial role in Zika virus' ability to destroy cells.

Now the team is partnering with other research groups to perform targeted drug studies. In addition to searching for drugs to block Zika virus, as the group is doing, They are also interested in genetic modifications to the virus that could help better target its destruction to brain cancer cells, while leaving healthy cells alone.

How the brain balances pleasure and pain