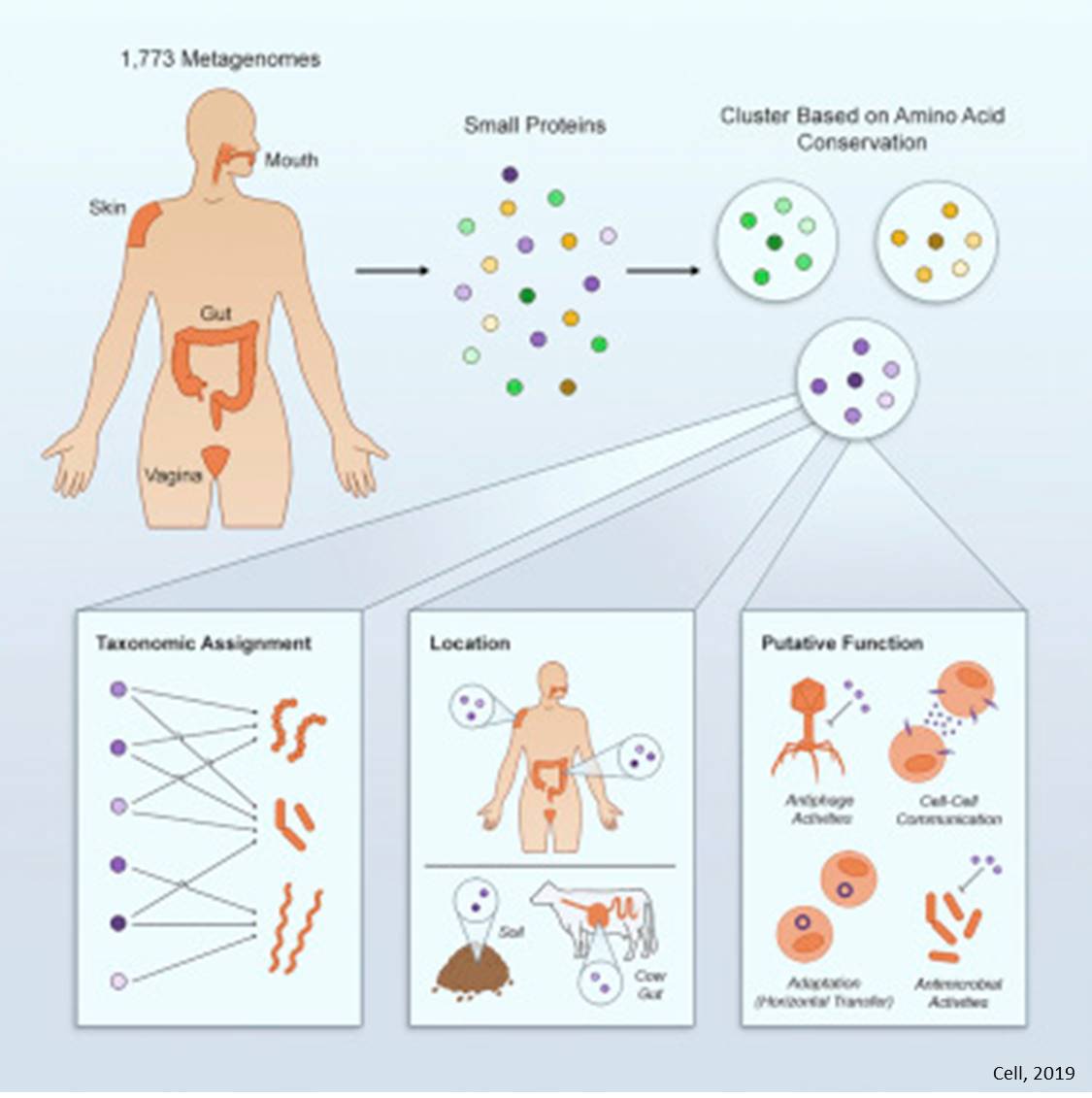 Your body is a wonderland. A wonderland teeming with trillions of bacteria, that is. But it's not as horrifying as it might sound. In fact, there's mounting evidence that many aspects of our health are closely intertwined with the composition and hardiness of our microscopic compatriots, though exactly how is still mostly unclear.

Now, researchers have discovered that these microbial hitchhikers -- collectively known as the human microbiome -- are churning out tens of thousands of proteins so small that they've gone unnoticed in previous studies. The proteins belong to more than 4,000 new biological families predicted to be involved in, among other processes, the warfare waged among different bacterial strains as they vie for primacy in coveted biological niches, the cell-to-cell communication between microbes and their unwitting hosts, and the critical day-to-day housekeeping duties that keep the bacteria happy and healthy.

Because they are so small -- fewer than 50 amino acids in length -- it's likely the proteins fold into unique shapes that represent previously unidentified biological building blocks. If the shapes and functions of these proteins can be recreated in the lab, they could help researchers advance scientific understanding of how the microbiome affects human health and pave the way for new drug discovery. A paper describing the research findings will be published \ in Cell.

"It's critically important to understand the interface between human cells and the microbiome," the senior author said. "How do they communicate? How do strains of bacteria protect themselves from other strains? These functions are likely to be found in very small proteins, which may be more likely than larger proteins to be secreted outside the cell."

But the proteins' miniscule size had made it difficult to identify and study them using traditional methods.

"We've been more likely to make an error than to guess correctly when trying to predict which bacterial DNA sequences contain these very small genes," the senior author said. "So until now, we've systematically ignored their existence. It's been a clear blind spot."

It might be intimidating for the uninitiated to think too deeply about the vast numbers of bacteria that live on and in each of us. They account for far more cells in and on the human body than actual human cells do. Yet these tiny passengers are rarely malicious. Instead, they help with our digestion, supplement our diet and generally keep us running at our peak. But in many cases, it's been difficult to pick apart the molecular minutiae behind this partnership.

The researcehrs wondered if answers might be found in the small proteins they knew were likely to wiggle through the nets cast by other studies focusing on the microbiome. Small proteins, they reasoned, are more likely than their larger cousins to slip through the cell membrane to ferry messages -- or threats -- to neighboring host or bacterial cells. But how to identify and study these tiny Houdinis?

"The bacterial genome is like a book with long strings of letters, only some of which encode the information necessary to make proteins," the author said. "Traditionally, we identify the presence of protein-coding genes within this book by searching for combinations of letters that indicate the 'start' and 'stop' signals that sandwich genes. This works well for larger proteins. But the smaller the protein, the more likely that this technique yields large numbers of false positives that muddy the results."

To tackle the problem, the authors decided to compare potential small-protein-coding genes among many different microbes and samples. Those that were identified repeatedly in several species and samples were more likely to be true positives, she thought. When they applied the analysis to large data sets, they found not the hundreds of genes but tens of thousands. The proteins predicted to be encoded by the genes could be sorted into more than 4,000 related groups, or families, likely to be involved in key biological processes such as intercellular communication and warfare, as well as maintenance tasks necessary to keep the bacteria healthy.

The researchers confirmed the genes encoded true proteins by showing they are transcribed into RNA and shuttled to the ribosome for translation -- key steps in the protein-making pathway in all organisms. They are now working with collaborators to learn more about the proteins' functions and to identify those that might be important to the bacteria fighting for space in our teeming intestinal carpet. Such proteins might serve as new antibiotics or drugs for human use, they believe.

"Small proteins can be synthesized rapidly and could be used by the bacteria as biological switches to toggle between functional states or to trigger specific reactions in other cells," the author said. "They are also easier to study and manipulate than larger proteins, which could facilitate drug development. We anticipate this to be a valuable new area of biology for study."

Nobel Prize for Physics in 2018 goes to Laser Physics! Measuring single molecules from nanoliter of blood in real time