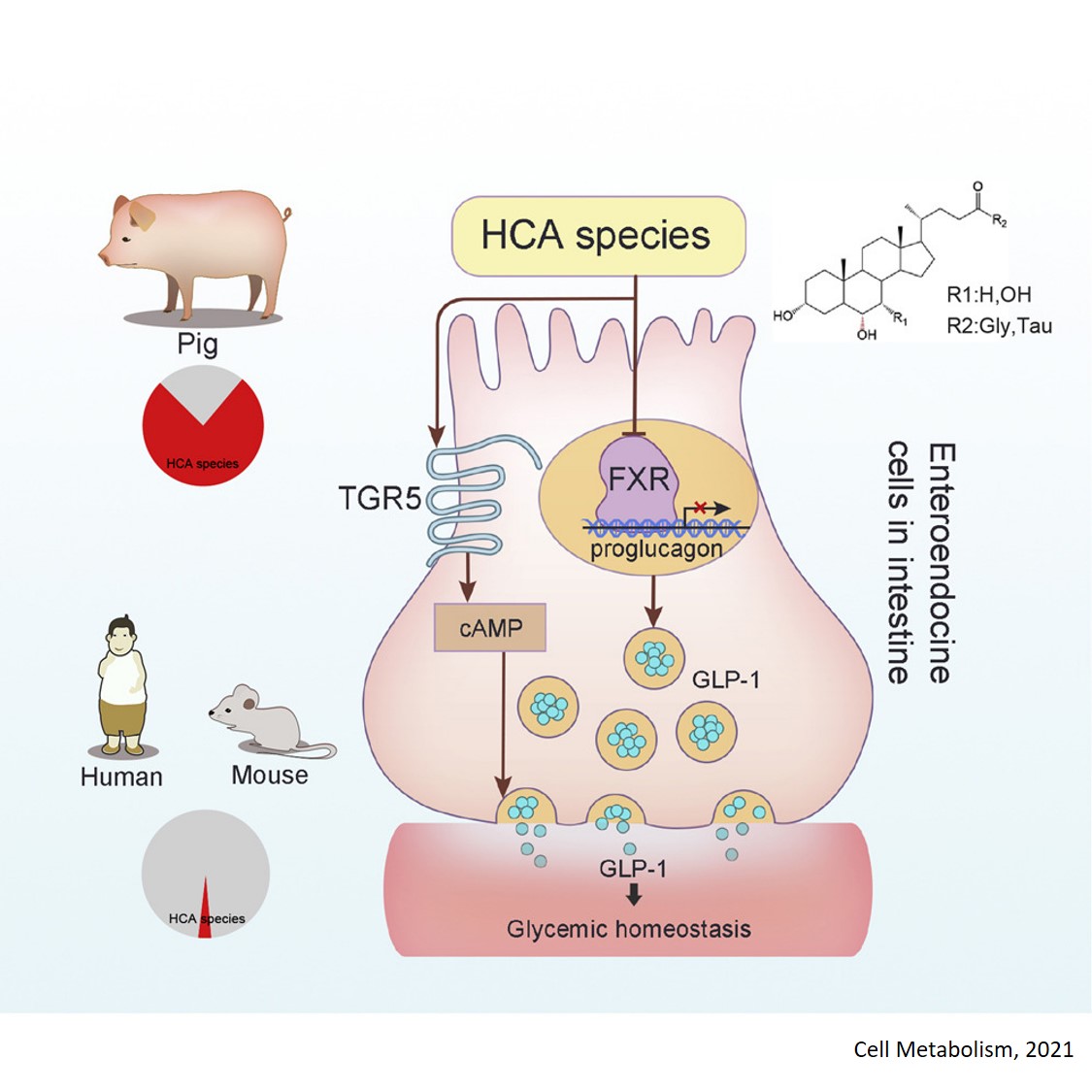 A series of studies have revealed that hyocholic acid and its derivatives (collectively known as HCAs), a component of bile acids that facilitate fat digestion, are a promising risk indicator of type 2 diabetes. The strong efficacy of HCAs in regulating blood glucose levels and protecting against diabetes has also been uncovered. The findings open a window for the development of HCA-based predictive markers as well as anti-diabetic drugs.

The research results have been published in journals Cell Metabolism and Nature Communications.

Inspired by the traditional Chinese medical book Compendium of Materia Medica, which recorded the use of pig bile to treat excessive thirst, a condition known today as diabetes, Professor Jia Wei, Chair Professor of the School of Chinese Medicine at HKBU, led research teams to conduct a series of studies on the role of HCAs in glucose homeostasis and diabetes prevention.

The result indicates the potential role of HCAs in the maintenance of stable glucose levels. This may explain why pigs, unlike humans, seldom suffer from diabetes despite their low physical activity levels and consumption of a calorie-rich diet.

To analyse the correlation between the levels of HCAs and the occurrence of diabetes in humans, data was collected from two large-scale cohort studies, namely the Shanghai Obesity Study and the Shanghai Diabetes Study. The researchers examined the serum bile acid profiles of 1,107 participants of the Shanghai Obesity Study, which was published in 2013. The participants were divided into three groups: healthy lean, healthy obese and obese with type 2 diabetes. It was discovered that the levels of serum HCAs were significantly lower in the healthy obese and obese with type 2 diabetes groups.

In another study, the serum bile acids of 132 participants of the Shanghai Diabetes Study were investigated. They were all healthy (at baseline) when they were enrolled in the study between 1998 and 2001. Ten years later, 86 of them had become metabolically unhealthy, while 46 remained healthy. Analysis showed that, compared with those who remained healthy ten years later, those who had become metabolically unhealthy had significantly lower baseline levels of serum HCAs, illustrating that levels of HCAs are a strong predictor of metabolic syndromes such as diabetes.

Another experiment conducted by the researchers focused on the effect of HCAs on glucagon-like peptide-1 (GLP-1). GLP-1 is a hormone produced by L-cells, a type of enteroendocrine cell that enhances insulin secretion and decreases blood glucose. In a laboratory setting, different kinds of bile acids, including HCAs, were applied to L-cells, at varying levels of concentration. Results showed that at a high concentration of 50 micromolar, HCAs were the most effective at stimulating GLP-1 secretion when compared with other types of bile acids. The findings also revealed that HCAs regulate blood glucose levels by stimulating the secretion of GLP-1 and thus insulin production.

"The results of our studies provide evidence of how HCAs help to regulate blood glucose levels, and they have revealed the mechanism of how it is achieved at a cellular level. HCAs demonstrate promising potential, and they could be developed into an agent for the prediction and treatment of type 2 diabetes," said the senior author.

"As gut microbiota can regulate the metabolism of HCAs, targeting the intestines instead of the pancreas could be a prospective novel strategy for treating diabetes. We will further investigate how to increase the secretion levels of HCAs in diabetic patients by regulating the intestinal bacteria," the author added.