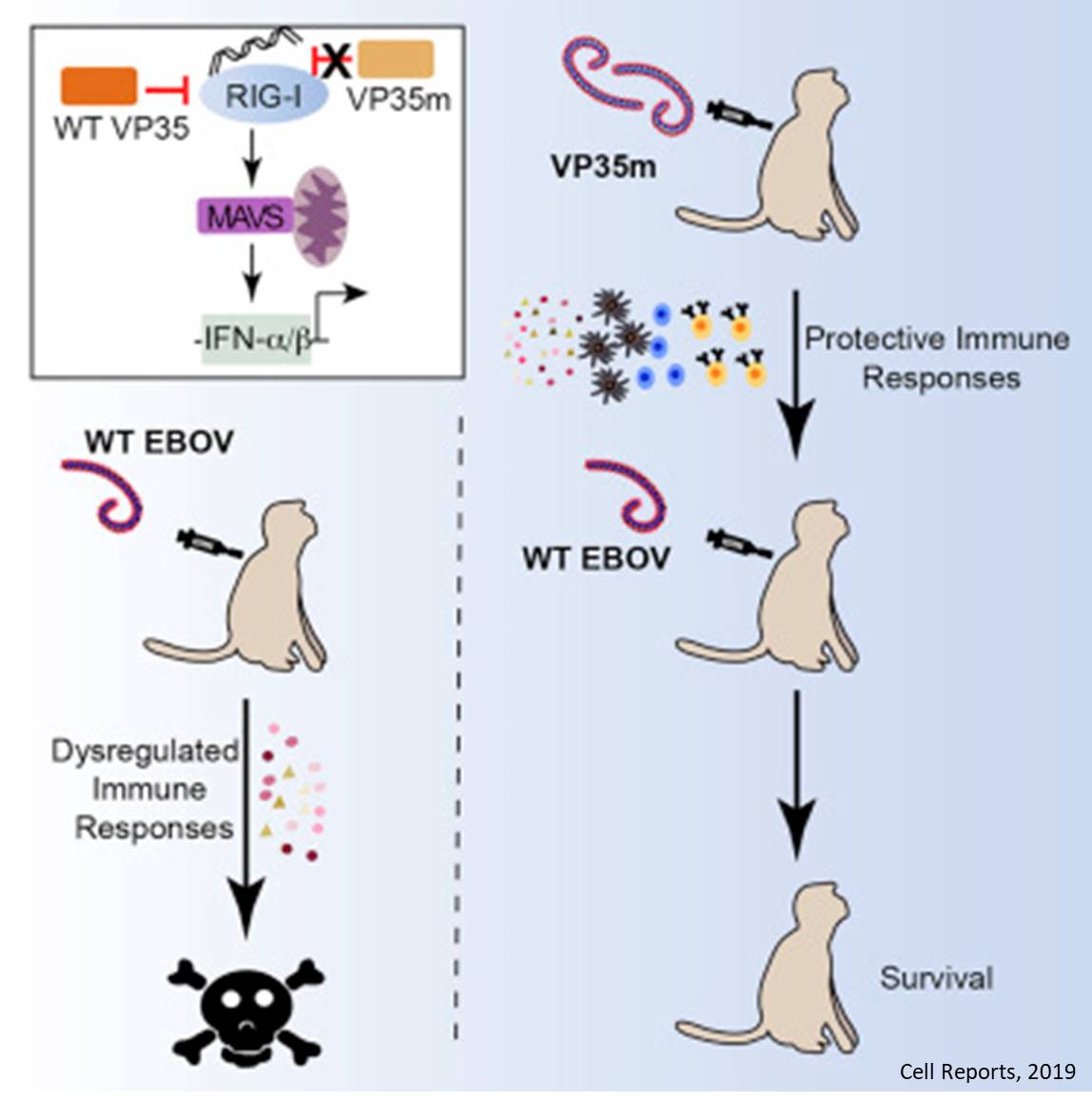 Inoculation with an Ebola virus that has mutations in a protein called VP35 does not cause disease and elicits protection in monkeys, researchers show in the journal Cell Reports. The findings suggest that the immune-evasion function of VP35 is a potential drug target, and it may be possible to develop a live attenuated Ebola virus vaccine in the future if precautions are taken to prevent reversion to virulence.

"This is not the next Ebola virus vaccine, but the study does show that it is possible to generate Ebola viruses that can grow in cell culture and induce strong immune responses but pose a decreased risk for scientists," says co-senior study author. "Such mutant viruses may be useful to safely study many Ebola virus functions."

Currently, there is no licensed treatment proven to neutralize the virus, but a range of therapies are under development. Vaccines to protect against Ebola are also under development and have been used to help control the spread of outbreaks in Guinea and in the Democratic Republic of the Congo. "Most current Ebola vaccine candidates express only a single viral protein, the glycoprotein, but patients who survive infection develop robust T cell responses to other viral proteins," the author says. "This suggests that a vaccine candidate expressing all viral proteins may elicit a broader, potentially more effective immune response."

In the new study, researchers tried to develop a mutant virus that expresses all of the Ebola virus genes and has the structure of an actual Ebola virus particle. They generated a virus with three mutations in the VP35 protein, which plays an important role in evading host immune responses.

Specifically, VP35 is known to suppress the production of immune system proteins called type I interferons and inhibit the maturation of dendritic cells, which present antigens to T cells and serve as messengers between the innate and adaptive immune systems. "We wanted to determine how these functions of VP35 impacted Ebola virus disease and host immune responses in the animal model that most closely reflects human disease," the author says.

A previous study showed that infection with a VP35-mutant Ebola virus protects guinea pigs against subsequent challenge with a guinea-pig-adapted Ebola virus. But in general, rodent models are more readily protected from challenge by antiviral or vaccine approaches than non-human primate models, which are susceptible to the same Ebola virus strains that cause disease in humans. "The prior studies also have not carefully assessed immune responses to the VP35-mutant Ebola virus, as we have done in our study," the author says.

To test whether their mutant virus would protect non-human primates against Ebola infection, the researchers used it to inoculate three cynomolgus macaques--the animal model that serves as the gold standard for evaluating Ebola virus virulence. Infection with the mutant virus activated antigen presentation and innate immunity pathways and elicited increased frequencies of proliferating memory T cells and B cells and the production of antibodies.

After 28 days, the researchers challenged the monkeys with a lethal dose of unmodified Ebola virus. Two monkeys survived with no indications of illness, but one died nine days later. To induce a more protective response, the researchers inoculated five macaques with a higher dose of the mutant virus. Vaccination caused mild illness in three of the monkeys. This time, all of the animals survived with no detectable clinical signs after being challenged with a 300-fold higher dose than the standard 100 percent lethal challenge dose of unmodified Ebola virus. But most monkeys showed temporary hematological changes such as low platelet count or low numbers of white blood cells.

"These data demonstrate that VP35 is a critical Ebola virus immune-evasion factor and provide insights into immune mechanisms of Ebola virus control," the author says. "We show that VP35 suppression of interferon responses is a key requirement for Ebola virus to cause disease, and VP35 function impacts not only innate antiviral defenses but also adaptive immune responses. Because it is critical for virulence, the interferon-suppressing function of VP35 is a potential drug target."

Even though the mutant Ebola virus is highly attenuated and can immunize non-human primates, it exhibits surprisingly robust replication in cell culture. "This combination of features makes the mutant Ebola virus potentially suitable for research without the challenging constraints imposed by biosafety level 4 containment, which is used for the most dangerous microbes," the author says.

The authors say that the mutant virus is not yet suitable as a vaccine because it would first be necessary to overcome regulatory hurdles and make sure that multiple different attenuating mutations would prevent the virus from reverting and becoming virulent. In future studies, the researchers plan to investigate whether a similar approach could be used to attenuate related viruses. They are also interested in identifying additional mutations that that would still allow the virus to replicate while preventing it from causing disease.