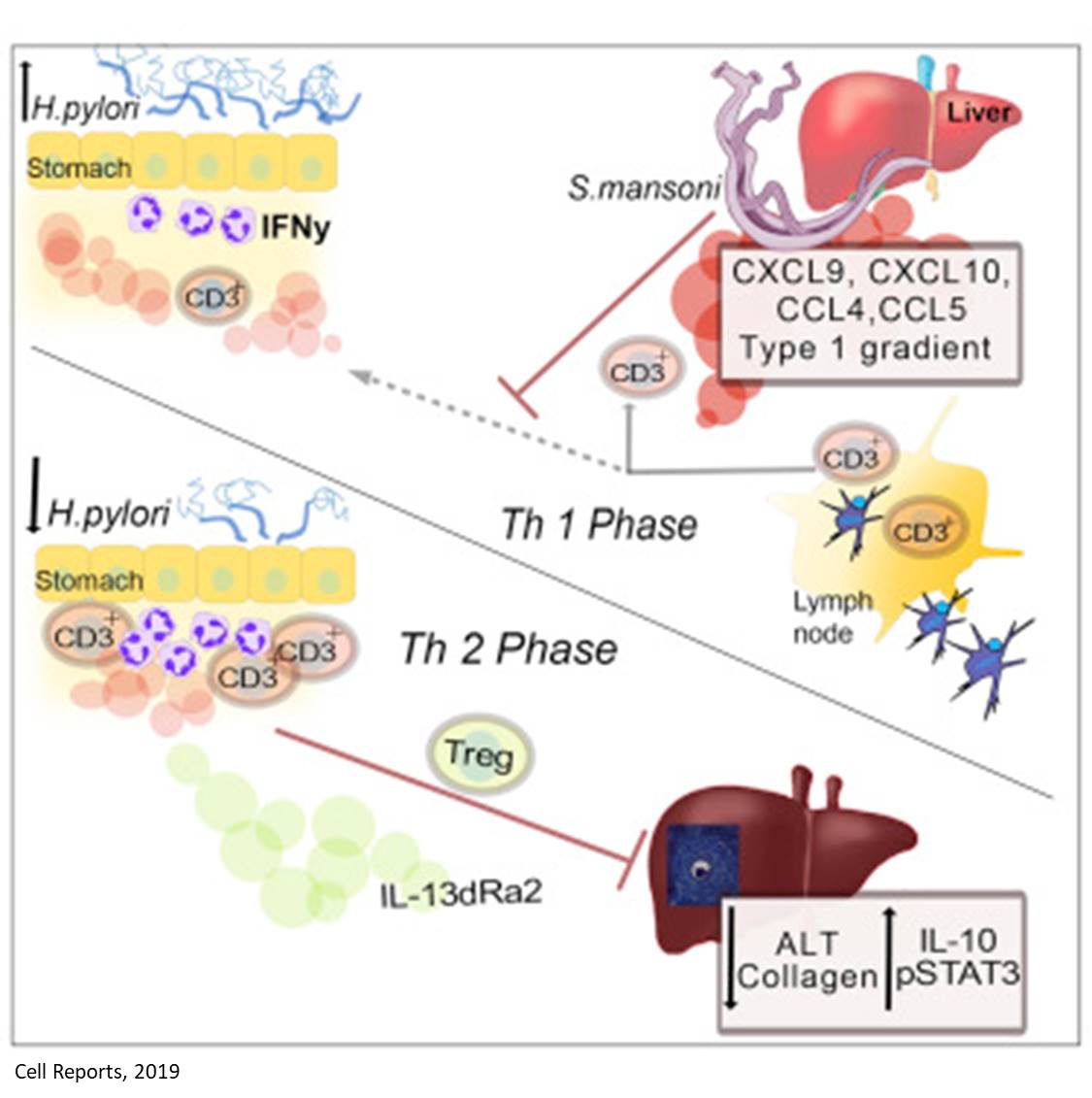 The team has completed the first study of the effects of a simultaneous infection with blood flukes (schistosomes) and the bacterium Helicobacter pylori - a fairly common occurrence in some parts of the world. They identified a complex interaction which resulted - among other effects - in a weakening of the adverse impact of the pathogens acting individually.

Around 240 million people worldwide are afflicted with schistosomiasis, an illness caused by flatworms of the genus schistosoma, commonly known as blood flukes. These parasites generally enter the human body with water from lakes, ponds or rivers. Worms, larvae and eggs are transported to various organs in the body through the bloodstream. The species Schistosoma mansoni is especially damaging to the liver, where it causes cirrhosis.

Helicobacter pylori is a bacterium that colonizes the human stomach. One in three people in Germany carry it and the worldwide rate is actually around 50%. Infections are associated with stomach ulcers and cancer. In places where schistosomes are widespread, as in some African countries south of the Sahara, co-infections with Helicobacter pylori are frequent.

In a schistosomiasis infection, the initial infection is followed by an acute phase, superseded about five weeks later by a chronic phase. In their study, researchers   show that fewer T-cells are found in the stomach during the acute phase of schistosomiasis. In hosts infected only by Helicobacter pylori, these immune cells are more numerous in the stomach and cause inflammation there. "We show that the schistosomiasis drives an increase in chemokine levels in the liver. The chemokines attract the T-cells and, in a sense, misdirect them to the liver," says the author. This leads to a reduction in stomach inflammation, the author0 explains.

This effect fades away when the chronic phase begins, however. While hosts infected with schistosomiasis alone often suffer liver damage during that phase, this is less common with co-infections. In their investigations, the authors detected elevated quantities of the signalling protein IL-13dRa2 in the blood of mice infected with the bacteria. "IL-13dRa2 can provide protection against cirrhosis and can even reverse tissue changes," says the author. "We therefore believe that they could play a decisive role to reduce the extent of liver cirrhosis in co-infections."

In everyday life, many people are repeatedly re-infected with schistosomes because they come into frequent contact with water containing the worms. „As a result, there is no time limit on the diversion of T-cells to the liver because the chronic and acute phases occur simultaneously," explains the author.

At first glance, the interactions in case of a co-infection may look like a positive side effect: Although the infected individual is suffering from two illnesses, the harmful effects of both are seemingly reduced. "Co-infections can have other consequences, however. For example, the changed immune response can limit the effectiveness of vaccines," says the author. "Co-infections are widespread especially in poorer regions," adds the author. "We urgently need more studies on their effects and ways of dealing with them, for example in order to develop new and more effective vaccination strategies."