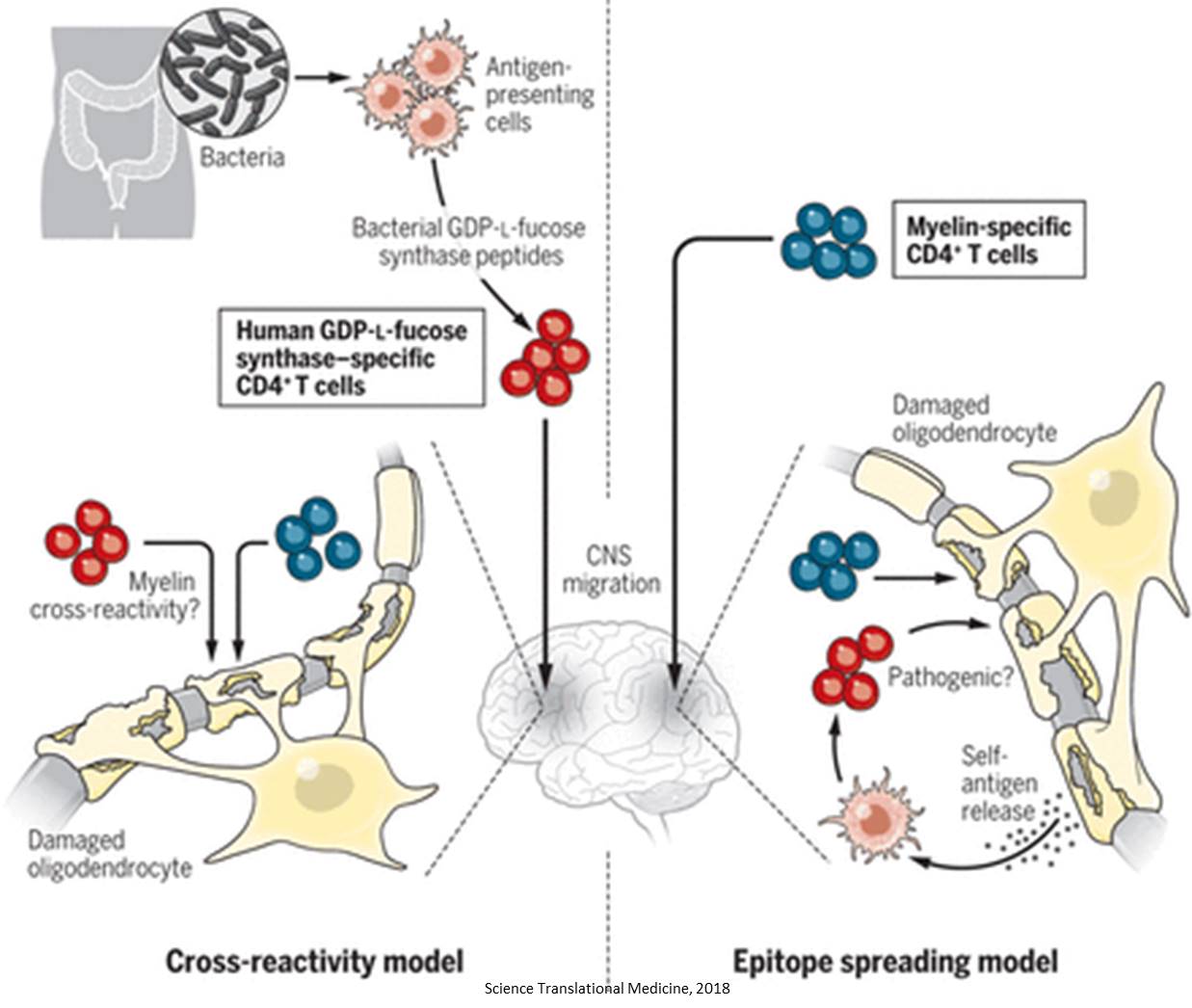 Multiple sclerosis is an autoimmune disease in which the body's own immune system attacks and damages the protective coating around nerve cells. This coating is made up of myelin - a biological membrane of protein and fatty substances - which is why research efforts to find the disease's target antigen have so far focused on the myelin membrane's components. New findings made by the research group now suggest that it is worth broadening the research perspective to gain a better understanding of the pathological processes.

In the journal Science Translational Medicine, the scientists report that T cells - i.e. the immune cells responsible for pathological processes - react to a protein called GDP-L-fucose synthase. This enzyme is formed in human cells as well as in bacteria frequently found in the gastrointestinal flora of patients suffering from multiple sclerosis.

The researchers wanted to determine which protein shards stimulated the patients’ T cells, so they tested 200 fragment mixtures, each containing 300 billion varieties. The two fragments with the strongest effect turned out to be part of a human enzyme called guanosine diphosphate-L-fucose synthase, which helps cells remodel sugars that are involved in everything from laying down memories to determining our blood type.

T cells from 12 of 31 patients who had who either had been diagnosed with MS or had shown early symptoms of the disease also reacted to the enzyme, the researchers report. What’s more, T cells from four of the eight patients tested responded to a bacterial version of the enzyme—lending credence to the recently proposed idea that intestinal bacteria may help spark the disease.

Although guanosine diphosphate-L-fucose synthase is prevalent in the brain, “it has never been a candidate in the past,” says another author. The discovery, is “a first step in an interesting new direction.”

"We believe that the immune cells are activated in the intestine and then migrate to the brain, where they cause an inflammatory cascade when they come across the human variant of their target antigen," says the author. For the genetically defined subgroup of MS patients examined by the researchers, results show that gut microbiota could play a far greater role in the pathogenesis of the disease than previously assumed.

If guanosine diphosphate-L-fucose synthase turns out to be one of the elusive MS self-antigens, dosing patients with it might tame symptoms such as numbness and muscle weakness in much the same way that allergy shots prevent people from reacting to substances like ragweed pollen, the author says.

"Our clinical approach specifically targets the pathological autoreactive immune cells," says the author. This approach therefore differs radically from other treatments that are currently available, which throttle the whole immune system. While these treatments often succeed in stopping the progression of the disease, they also weaken the immune system - and can thus cause severe side effects.

The clinical approach of the research group involves drawing blood from MS patients in a clinical trial and then attaching the immunoactive protein fragments onto the surface of red blood cells in a laboratory. When the blood is reintroduced into the bloodstream of patients, the fragments help to "re-educate" their immune system and make it "tolerate" its own brain tissue. This therapeutic approach aims for effective targeted treatment without severe side effects.