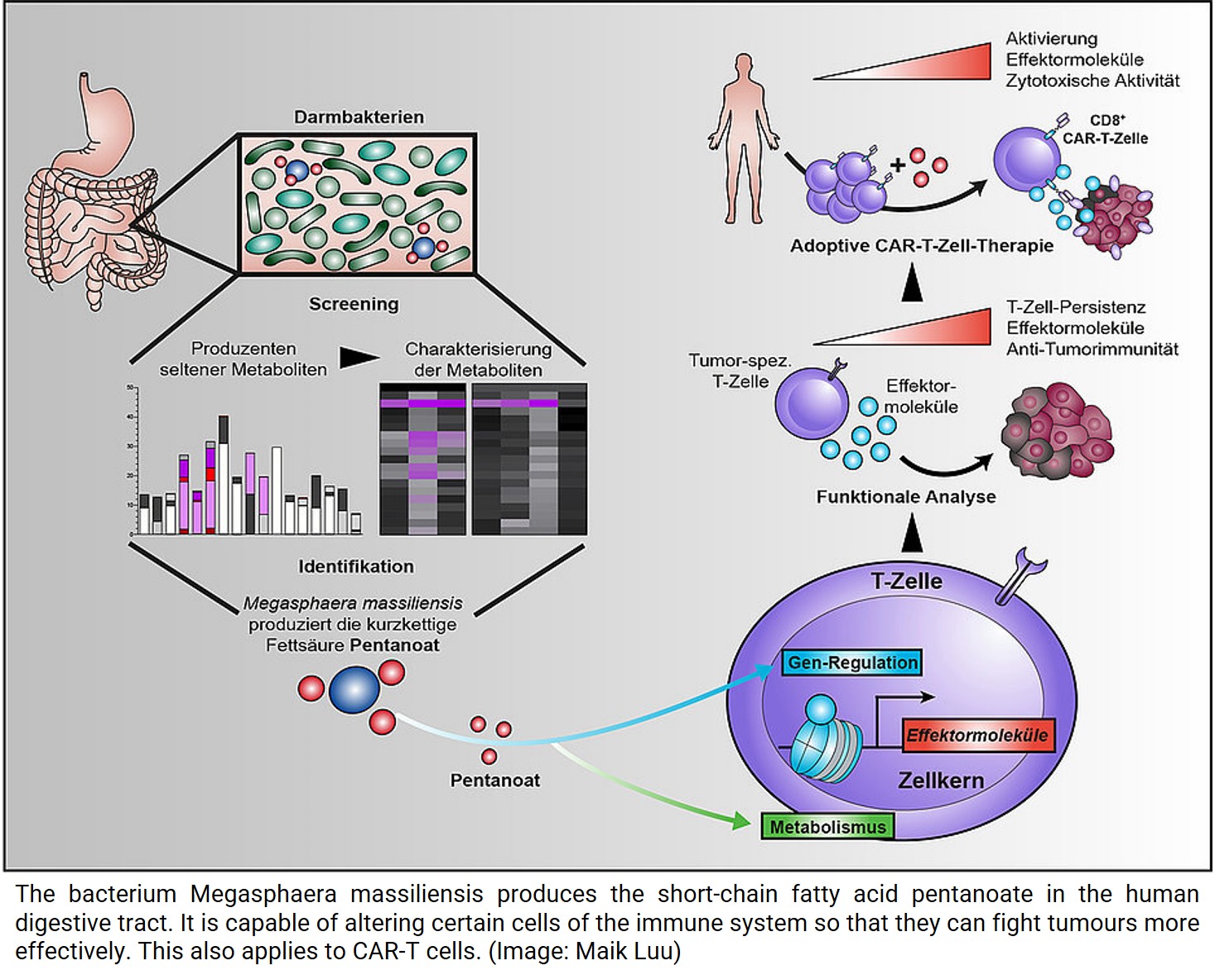 It is estimated that each person carries around 100 trillion bacterial cells in their digestive tract, belonging to several thousand species.

The microbiome has been the focus of research for 20 years - ever since a new technique made it possible to analyse these bacteria quickly and precisely: high-throughput sequencing. Since then, there has been an increasing body of findings that the microbiome, which is sometimes also referred to as the second human genome, is not only of central importance for digestion, but also influences, if not controls, at least a large number of body functions. The immune system is mentioned particularly frequently.

Scientists have now succeeded for the first time in experimentally demonstrating that bacterial metabolites are able to increase the cytotoxic activity of certain immune cells and thus positively influence the efficiency of tumour therapies. Ideally, the composition of the bacterial species in the microbiome could be used to control its influence on the success of the therapy.

The research team published the results of its study in the journal Nature Communications.

"We were able to show that the short-chain fatty acids butyrate and, in particular, pentanoate are able to increase the cytotoxic activity of CD8 T cells," the author describes the central result of the now published study. CD8 T cells are sometimes also called killer cells. As part of the immune system, it is their task to specifically kill cells that are harmful to the organism.

Short-chain fatty acids, in turn, belong to the most dominant class of metabolites of the gut microbiome. On the one hand, they can boost the metabolism of T cells by inducing central regulators of energy metabolism. On the other hand, they can inhibit specific enzymes that regulate the accessibility to the genetic material and thus the gene expression in the T cells. In doing so, they induce epigenetic changes.

"When short-chain fatty acids reprogram CD8 T cells, one of the results is increased production of pro-inflammatory and cytotoxic molecules," the author explains. In the experiment, treatment with the fatty acid pentanoate increased the ability of tumor-specific T cells to fight solid tumor models. "We were able to observe the same effect when fighting tumor cells with so-called CAR-T cells," says the scientist.

CAR-T cells are written out as "chimeric antigen receptor T cells". While normal T cells are largely "blind" to tumor cells, CAR T cells are able to recognize specific target antigens on the tumor surface and destroy the cancer cells thanks to a genetic modification.

"The results are an example of how metabolites of intestinal bacteria can change the metabolism and gene regulation of our cells and thus positively influence the efficiency of tumor therapies," says another author. In particular, the use of CAR-T cells against solid tumors could benefit from this.

In these cases, therapy with genetically modified cells has so far been much less effective than the treatment of haematological tumours such as leukaemia. This could change if the CAR-T cells were treated with pentanoate or other short-chain fatty acids before being used in patients, the scientists hope.

This effect might specifically be exploited via the composition of the bacterial intestinal colonisation - especially since the authors involved in the study were also able to identify the essential pentanoate producer of the intestinal flora: the bacterium Megasphaera massiliensis.

However, there is still a long way to go before the new findings will lead to new therapies for cancer patients. In a next step, the research team will initially expand the spectrum of tumour diseases investigated and, in addition to other solid tumours, also look at haematological tumour diseases such as multiple myeloma. In addition, it wants to investigate the functioning of short-chain fatty acids more intensively in order to identify starting points for targeted genetic modifications.