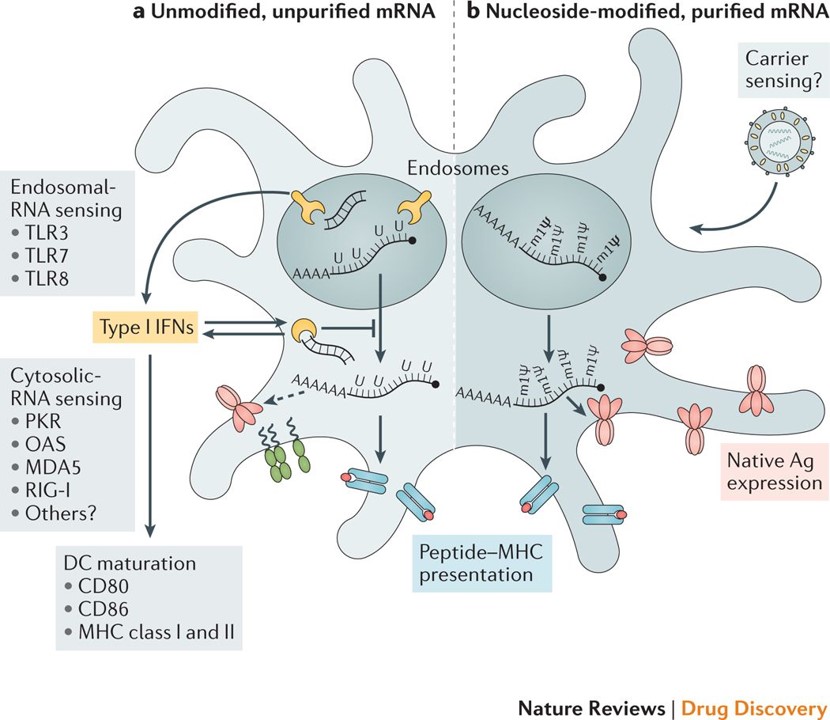 A new study puts researchers within closer reach of vaccines that can protect infants against infections by overcoming a mother's antibodies, which are known to shut down immune defenses initiated by conventional vaccines. That hurdle largely explains why vaccinations for infectious diseases like influenza and measles not given until six to 12 months of age. Findings from the preclinical study were published in Science Translational Medicine.

The research team found that a specialized modified-RNA (mRNA) influenza vaccine successfully protected young mice against the infection in the presence of maternal antibodies. The study suggests this protection occurred because the vaccine programs cells to constantly churn out new antigens for a prolonged period of time, rather than delivering a one-time shot of a viral protein.

"Around the world, every year, many young infants become infected and often die from infections because of a lack of effective vaccines to protect them earlier in life," the author said. "mRNA-based vaccines could potentially help prevent that. What's more, it would not only be effective against influenza but also other pathogens, as the vaccine's platform is easily adaptable to different antigens."

Developing effective vaccines that protect infants in the presence of maternal antibodies has proven difficult because the antibodies can bind to vaccines and prevent them from eliciting good immune responses.

"Maternal antibodies are kind of a double-edged sword: they are great to have around when you are young because they can protect you from infection, but it's tough to vaccinate when there are high levels of them," the author said. "Today's strategy is to wait awhile for these antibodies to decline. This isn't ideal because the timing can be imprecise, so there is almost always a period where the young infant is susceptible to disease."

mRNA vaccines have emerged as leading candidates for protection against pathogens in adult clinical studies. Instead of delivering lab-grown viral proteins like a traditional vaccine, mRNA vaccines introduce an mRNA sequence that programs cells to produce antigens to mimic the disease. The result is a more powerful immune response and broader protection.

For this study, the lab turned to the what is known as a nucleoside-modified mRNA encapsulated in lipid nanoparticles (mRNA-LNP) vaccine. In the past, the authors showed that this vaccine, which expresses hemagglutinin (HA) proteins, elicited robust antibody responses and protected adult animals from influenza.

To determine its ability to overcome maternal antibodies, the researchers first established a mouse model to show how the antibodies protect young mice against influenza and how they inhibit immune responses elicited by conventional vaccinations. Next, the researchers tested the mRNA vaccine platform in the mouse model and found that it elicited very strong antibody responses, both in the presence and absence of maternal antibodies, and protected the mice from the virus.

The vaccine essentially "slips under the radar," the author said, gets into cells, and then starts continuously producing the antigen for the immune system to respond to in what's called "prolonged germinal center reactions." The finding suggest that maternal antibodies eventually drop below a certain level and the antigen is still there to generate an immune response from the child.

The researchers continue to investigate the vaccine in mouse models to better understand mechanistically why this vaccine works so well in the presence of a mother's antibodies and hope to translate the promising results into human studies in the future.

"It could be a real game changer," the author said. "Imagine a world where an infant is born or comes into the clinic very early in life and can receive vaccines that have antigens not just for the flu but a multitude of different pathogens. Wouldn't that be something?"