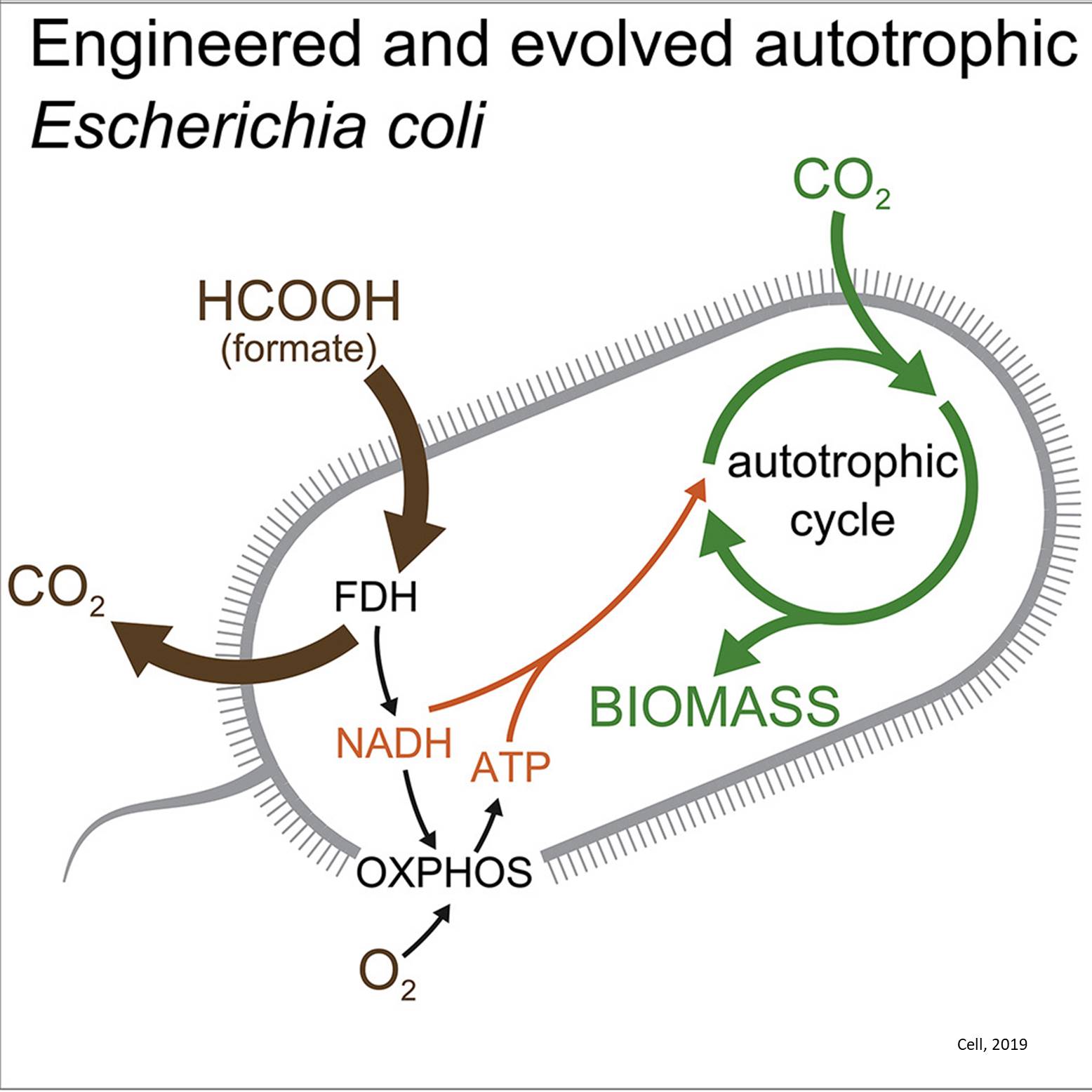 Over the course of several months, researchers created Escherichia coli strains that consume CO2 for energy instead of organic compounds. This achievement in synthetic biology highlights the incredible plasticity of bacterial metabolism and could provide the framework for future carbon-neutral bioproduction. The work appears in the journal Cell.

"Our main aim was to create a convenient scientific platform that could enhance CO2 fixation, which can help address challenges related to sustainable production of food and fuels and global warming caused by CO2 emissions," says the senior author. "Converting the carbon source of E. coli, the workhorse of biotechnology, from organic carbon into CO2 is a major step towards establishing such a platform."

The living world is divided into autotrophs that convert inorganic CO2 into biomass and heterotrophs that consume organic compounds. Autotrophic organisms dominate the biomass on Earth and supply much of our food and fuels. A better understanding of the principles of autotrophic growth and methods to enhance it is critical for the path to sustainability.

A grand challenge in synthetic biology has been to generate synthetic autotrophy within a model heterotrophic organism. Despite widespread interest in renewable energy storage and more sustainable food production, past efforts to engineer industrially relevant heterotrophic model organisms to use CO2 as the sole carbon source have failed. Previous attempts to establish autocatalytic CO2 fixation cycles in model heterotrophs always required the addition of multi-carbon organic compounds to achieve stable growth.

"From a basic scientific perspective, we wanted to see if such a major transformation in the diet of bacteria--from dependence on sugar to the synthesis of all their biomass from CO2--is possible," says the first author. "Beyond testing the feasibility of such a transformation in the lab, we wanted to know how extreme an adaptation is needed in terms of the changes to the bacterial DNA blueprint."

In the Cell study, the researchers used metabolic rewiring and lab evolution to convert E. coli into autotrophs. The engineered strain harvests energy from formate, which can be produced electrochemically from renewable sources. Because formate is an organic one-carbon compound that does not serve as a carbon source for E. coli growth, it does not support heterotrophic pathways. The researchers also engineered the strain to produce non-native enzymes for carbon fixation and reduction and for harvesting energy from formate. But these changes alone were not enough to support autotrophy because E. coli's metabolism is adapted to heterotrophic growth.

To overcome this challenge, the researchers turned to adaptive laboratory evolution as a metabolic optimization tool. They inactivated central enzymes involved in heterotrophic growth, rendering the bacteria more dependent on autotrophic pathways for growth. They also grew the cells in chemostats with a limited supply of the sugar xylose--a source of organic carbon--to inhibit heterotrophic pathways. The initial supply of xylose for approximately 300 days was necessary to support enough cell proliferation to kick start evolution. The chemostat also contained plenty of formate and a 10% CO2 atmosphere.

In this environment, there is a large selective advantage for autotrophs that produce biomass from CO2 as the sole carbon source compared with heterotrophs that depend on xylose as a carbon source for growth. Using isotopic labeling, the researchers confirmed that the evolved isolated bacteria were truly autotrophic, i.e., CO2 and not xylose or any other organic compound supported cell growth.

"In order for the general approach of lab evolution to succeed, we had to find a way to couple the desired change in cell behavior to a fitness advantage," the senior author says. "That was tough and required a lot of thinking and smart design."

By sequencing the genome and plasmids of the evolved autotrophic cells, the researchers discovered that as few as 11 mutations were acquired through the evolutionary process in the chemostat. One set of mutations affected genes encoding enzymes linked to the carbon fixation cycle. The second category consisted of mutations found in genes commonly observed to be mutated in previous adaptive laboratory evolution experiments, suggesting that they are not necessarily specific to autotrophic pathways. The third category consisted of mutations in genes with no known role.

"The study describes, for the first time, a successful transformation of a bacterium's mode of growth. Teaching a gut bacterium to do tricks that plants are renowned for was a real long shot," the author says. "When we started the directed evolutionary process, we had no clue as to our chances of success, and there were no precedents in the literature to guide or suggest the feasibility of such an extreme transformation. In addition, seeing in the end the relatively small number of genetic changes required to make this transition was surprising."

The authors say that one major study limitation is that the consumption of formate by bacteria releases more CO2 than is consumed through carbon fixation. In addition, more research is needed before it's possible to discuss the scalability of the approach for industrial use.

In future work, the researchers will aim to supply energy through renewable electricity to address the problem of CO2 release, determine whether ambient atmospheric conditions could support autotrophy, and try to narrow down the most relevant mutations for autotrophic growth.

"This feat is a powerful proof of concept that opens up a new exciting prospect of using engineered bacteria to transform products we regard as waste into fuel, food or other compounds of interest," the senior author says. "It can also serve as a platform to better understand and improve the molecular machines that are the basis of food production for humanity and thus help in the future to increase yields in agriculture."