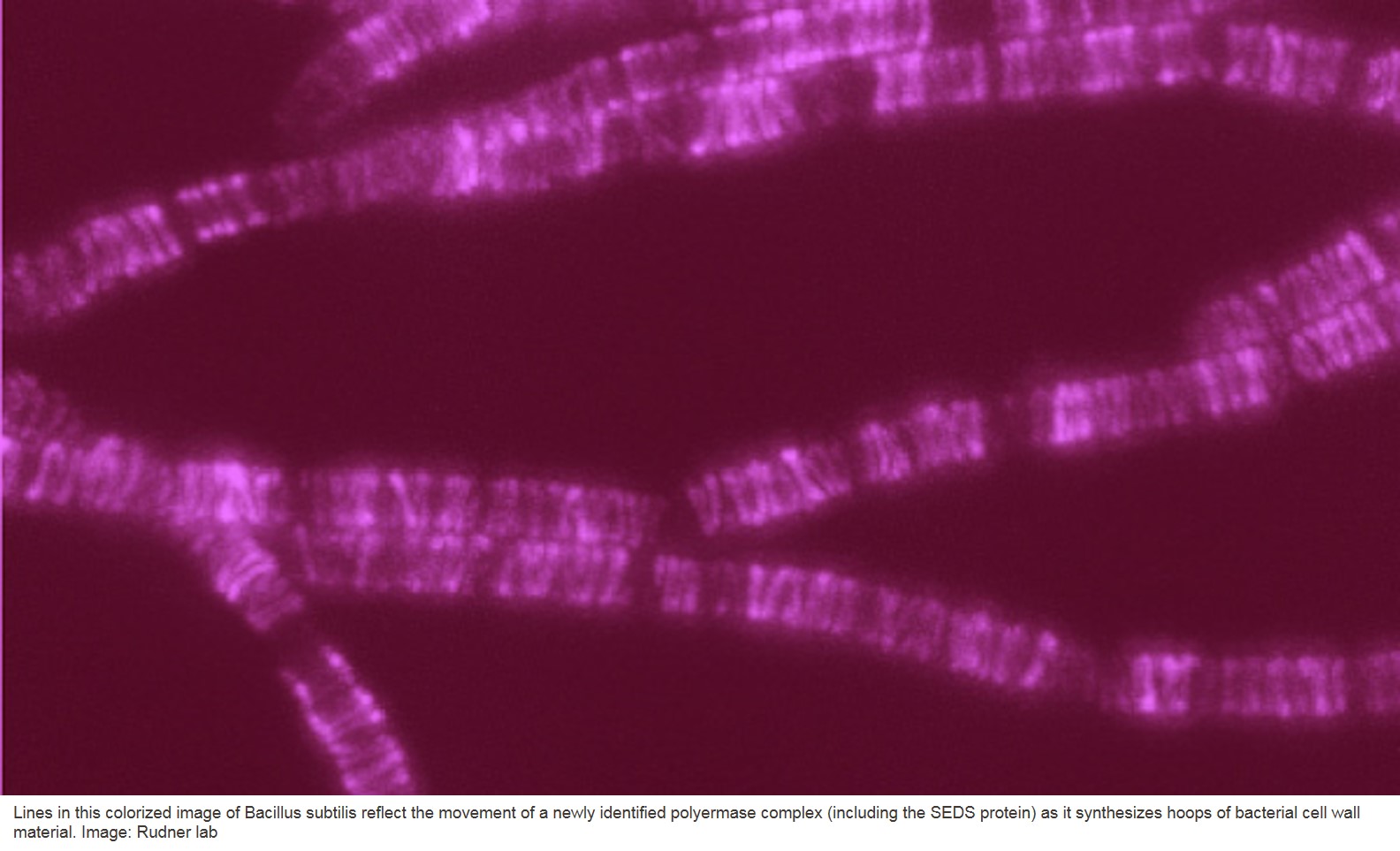 Harvard Medical School scientists have identified a new family of proteins that virtually all bacteria use to build and maintain their cell walls.

The discovery of a second set of cell wall synthesizers can help pave the way for much-needed therapies that target the cell wall as a way to kill harmful bacteria, said study leaders David Rudner and Thomas Bernhardt.

Findings of the research are published in Nature.

"We know these proteins are a great target because they are enzymes we can inhibit from the outside of the cell," said senior author of the paper.

"Now we have a better handle on what these proteins do and how a potential drug might affect their activity," said Bernhardt, the paper's co-author and HMS professor of microbiology and immunobiology.

The cell wall plays a critical role in maintaining a bacterium's structural integrity, dictating its shape and warding off external assaults from toxins, drugs and viruses. The cell wall is made of chains of sugars linked together by short peptides.

For half a century, penicillin-binding proteins--molecules named for the drug that disables them--were thought to be the major, perhaps only, cell wall synthesizers.

Penicillin was discovered in 1928 and first used to treat bacterial infections in 1942, but it wasn't until 1957 that scientists understood how penicillin blocked the proteins that build the cell walls of bacteria. Research in the 1970s and 1980s on the bacterium Escherichia coli fleshed out the mechanism by which penicillin-binding proteins build the cell wall.

Clues that other players may be involved in cell wall biogenesis emerged later. A crucial discovery, made in 2003, was overlooked by many in the field: The bacterium Bacillus subtilis was capable of growing and synthesizing its cell wall even in the absence of penicillin-binding proteins. Some researchers were tantalized by the "missing polymerase," sometimes called the "moonlighting enzyme."

Later experiments, both genetic and biochemical, confirmed that SEDS proteins are indeed a completely new family of cell wall synthesizers.

The scientists also showed that the two families of cell wall synthesizers could work in tandem: While SEDS proteins circumnavigate the cell wall making hoop-like structures, penicillin-binding proteins move diffusely, making smaller strands that, together with the hoop-like strands, build the cell wall.

Earlier studies showing that bacteria died when the penicillin-binding proteins were blocked obscured the importance of SEDS proteins, the researchers said.

In the current paper, the scientists found that SEDS proteins are more common in bacteria than are the penicillin-binding proteins, raising hopes that a potential antibiotic targeting SEDS proteins could be effective against a broad spectrum of bacteria.

"For a long time in the field, it was thought that one set of enzymes worked in one set of complexes to build a wall. Now we have two sets of enzymes appearing to work in different systems," author said. "Somehow they have to coordinate to build this netlike structure that maintains integrity and expands as the cells grow and divide."

How the two families of proteins work together is just one of many questions raised by the new work.

"Even though the history goes all the way back to the 1920s with penicillin, there's plenty to learn," author said.

"That's what makes this so exciting," senior author said. "In this modern era of sequenced genomes, we're still discovering new enzymes that work in this pathway."