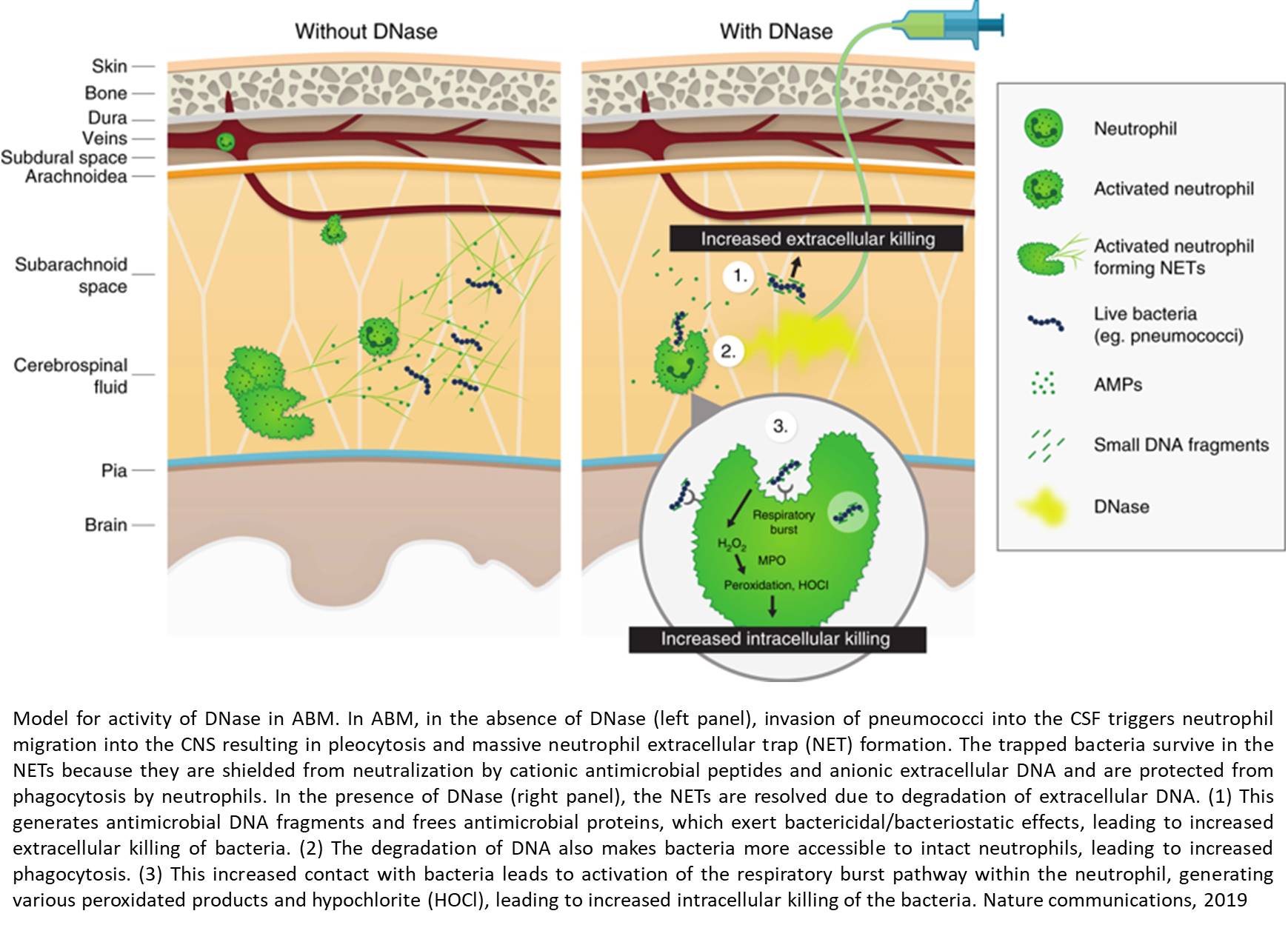 With the increasing threat of antibiotic resistance, there is a growing need for new treatment strategies against life threatening bacterial infections. Researchers may have identified such an alternative treatment for bacterial meningitis, a serious infection that can lead to sepsis. The study is published in Nature Communications.

Our immune system has several important defenders to call on when an infection affects the central nervous system. The researchers have mapped what happens when one of them, the white blood cells called neutrophils, intervene in bacterial meningitis.

"It is as though in pure frustration they turn themselves inside out in a desperate attempt to capture the bacteria they have not been able to overcome. Using this approach, they capture a number of bacteria at once in net-like structures, or neutrophil extracellular traps (NETs). This works very well in many places in the body where the NETs containing the captured bacteria can be transported in the blood and then neutralised in the liver or spleen, for example. However, in the case of bacterial meningitis these NETs get caught in the cerebrospinal space, and the cleaning station there is not very effective", explains the senior author.

Would it be possible to cut up the nets so that the bacteria are exposed to the body's immune system, as well as to antibiotics, making it easier to combat the infection? As the NETs consist mainly of DNA, the researchers investigated what would happen if you brought in drugs used for cutting up DNA, so-called DNase.

"We gave DNase to rats infected with pneumococcus bacteria, which caused bacterial meningitis, and could show that the NETs dissolved and the bacteria disappeared. It seems that when we cut up the NETs, the bacteria are exposed to the immune system, which finds it easier to combat the bacteria single-handed. We were able to facilitate a significant reduction in the number of bacteria without antibiotic intervention, says one of the researchers behind the study.

In the 1950s, Professor Tillett at the Rockefeller University in the USA, found lumps in the cerebrospinal fluid of patients with bacterial meningitis. Professor Tillett discovered that these lumps could be dissolved using DNase. This was effective in combination with antibiotics and reduced the mortality rate for meningitis from around 30 per cent to about 20 per cent. However, this treatment had side effects, as the DNase was extracted from animals and could therefore trigger allergic side effects.

"At that time, everyone was so happy about the antibiotics, they reduced mortality for the infections and it was thought that we had won the war against bacteria. I believe we need to go back and take up a part of the research that took place around the time of the breakthrough for antibiotics. We can perhaps learn from some of the discoveries that were then flushed down the drain", says the author.

"The development of resistance in bacteria is accelerating and we need alternatives to antibiotics. The drug we use in the studies is a therapeutic biological product derived from humans and has already been approved for human use. They are not expensive and have also been tested against many different bacteria and infections. Bacterial meningitis is a major challenge in many parts of the world. In India, for example, it is a major cause of death among children, so there would be significant benefits there from using such a treatment strategy", says the lead author.

The researchers want to go on to set up a major international clinical study and use DNase in the treatment of patients with bacterial meningitis.