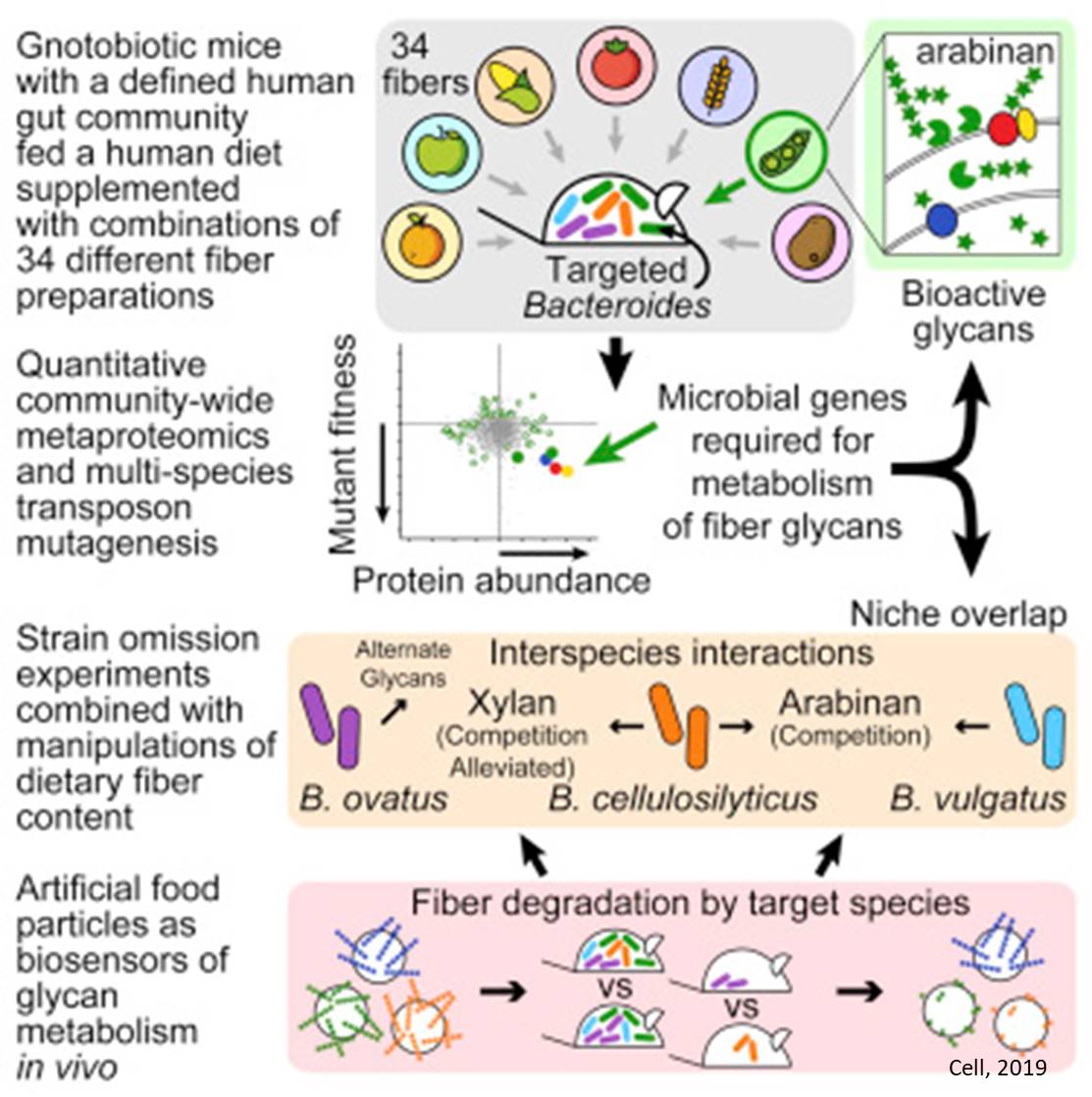 Certain human gut microbes with links to health thrive when fed specific types of ingredients in dietary fibers, according to a new study.

The work -- conducted in mice colonized with human gut bacteria and using new technologies for measuring nutrient processing -- is a step toward developing more nutritious foods based on a strategy of targeted enrichment of key members of gut microbial communities. The researchers identified fibers that selectively increase the abundance of beneficial microbes and tracked down the bioactive components of fibers responsible for their effects. To decipher how members of gut communities compete or cooperate with each other for these fiber ingredients, they also invented a type of artificial food particle that acts as a biosensor for monitoring nutrient processing within the intestine.The study appears in the journal Cell.

"We are in the midst of a revolution in food science - where the naturally occurring molecules present in various food staples are being identified using advanced analytic tools," said senior author  and leader of the current study. "The resulting encyclopedias of food ingredients are providing an opportunity to understand how gut microbes are able to detect and transform these ingredients to products they use to satisfy their own needs, as well as share with us. Cracking the code of what dietary ingredients beneficial microbes covet is a key to designing foods that enhance health."

Dietary fiber is known to promote health, but typical Western diets are lacking in high-fiber fruits, vegetables, whole grains and legumes. Fibers contain very diverse and complex collections of molecules. The specific components of various fibers that are used by gut bacteria and confer health benefits are generally not known. Since the human genome possesses a very limited arsenal of genes that break down dietary fiber, and many gut bacterial species are chock full of these genes, people depend on gut microbes to digest fiber.

In an effort to understand which types of fiber promote the representation of different types of beneficial microbes in the human gut, and the nature of their active ingredients, the researchers screened 34 types of fiber provided by the food company Mondelez International. Their list included fibers often discarded during food manufacturing, such as fruit and vegetable peels and grain husks.

The researchers began by colonizing mice raised under sterile conditions with a collection of gut bacteria species they had cultured from a healthy human. The genomes of these organisms were sequenced to inventory their genes. Groups of mice containing this model human gut community initially were fed a base human diet high in saturated fats and low in fiber. Next, the researchers screened 144 derivative diets containing different types and amounts of fiber supplements. The investigators monitored the effects of the added fibers on levels of members of the model gut community, as well as expression of the proteins encoded by their genomes.

"Microbes are master teachers," the senior author said. "The microbial genes that respond to the different fibers provided an important clue as to what kinds of molecules in a given type of fiber a given community member preferred to consume."

Said first author: "Our screen identified food-grade fibers that selectively affected different species belonging to a group of bacteria known as Bacteroides. Our experiments showed that in pea fiber, the active molecular constituents included a type of polysaccharide called arabinan, whereas in citrus pectin recovered from orange peels, another type of polysaccharide called homogalacturonan was responsible for expansion of the bacteria."

The researchers uncovered interactions between gut bacterial species that help explain the selective effects of fibers on Bacteroides species. It turns out that some of the Bacteroides in their community directly compete with each other to consume components of dietary fibers, while others defer to their neighbors. Understanding these relationships is important for developing foods that are optimally processed by different microbial populations that live together in the gut, according to the researchers.

To dissect these relationships, the authors created artificial food particles consisting of different types of magnetic, microscopic glass beads. Each type contained a given fiber-derived polysaccharide bound to the bead's surface together with a given type of bound fluorescent label. The collection of different bead types was introduced simultaneously into the intestines of different groups of mice colonized with the human gut microbial community -- with or without intentional omission of one or more of its Bacteroides members. Food particles then were recovered after passage through the intestines of these animals, and the amount of polysaccharide remaining on the particles surfaces was measured.

"These artificial food particles acted as biosensors, allowing us to decipher how inclusion or omission of Bacteroides influenced the community's ability to process the different polysaccharides present on the different beads," the author said. "Moreover, we were able to monitor fiber degradation in different diet contexts."

Thesenior author noted that nutrient-containing artificial food particles could not only be used as biosensors to define the functional capabilities of a person's microbial community, but also could help food scientists develop methods for producing more nutritious foods containing different combinations of health-promoting bioactive fiber components.