Obesity hormone GDF15 is a risk factor for sepsis 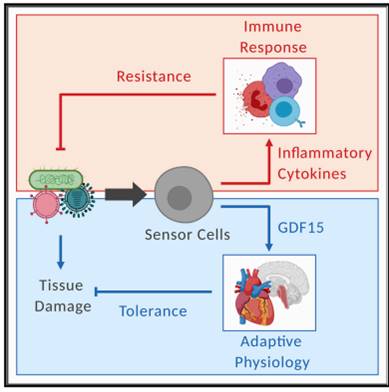 Sepsis is a potentially fatal illnes that derives from a deregulated response of the organism to an infection, leading to organ malfunction. A study recently published in the scientific journal The Lancet, estimated that in 2017 sepsis affected 49 million people and 11 million people worldwide have died.

With the aim of expanding knowledge about this disease, the team investigated whether the hormone known as GDF15 (growth and differentiation factor 15) could play a role in sepsis. This hormone has the specificity of being widely studied by several laboratories and pharmaceuticals as a treatment for obesity.

"We've discovered a critical effect of GDF15 on infection, which is relevant because this hormone increases in many common diseases, like obesity, pulmonary and cardiovascular diseases", explains the senior author.

The researchers measured GDF15 levels in blood samples from patients with sepsis, under treatment in intensive care units, and compared these levels with the ones of healthy individuals and of patients diagnosed with appendicitis. Results have shown that sepsis patients had increased levels of GDF15 when compared with the other groups, and that the high levels of the hormone were correlated with mortality.

The research proceeded with the study in mice that didn't had the GDF15 gene. The results obtained revealed that mice survived better to a bacterial abdominal infection that resembles sepsis in human patients, suggesting that the hormone plays a role in sepsis. Subsequently researchers studied what was causing the increased survival rate in mice that didn't had GDF15. They noted that these mice were able to substantially recruit more white blood cells for the abdomen, specially neutrophils, better controlling locally the infection and preventing it from spreading rapidly to the rest of body.

"At a time when many pharmaceutical companies and groups are considering using GDF15 as a complementary therapy for obesity, it's important to have in mind that this therapeutic strategy could increase the risk of severe infection, including sepsis", the senior author warns.

Regarding the results of this research work, the researcher says that "they raise the possibility that the inhibition of GDF15's action, perhaps using a blocking monoclonal antibody, could work as a new complementary therapy for sepsis, helping to control severe local infections and preventing it to become systemic and life-threatening".