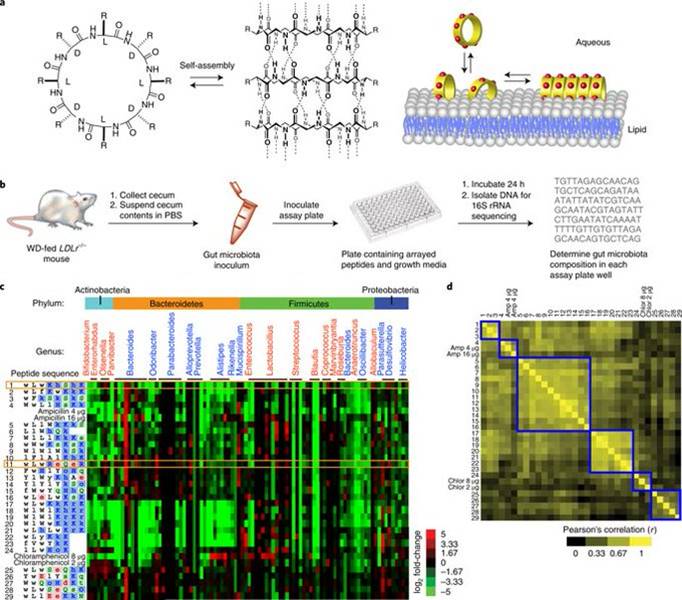 Scientists have developed molecules that can remodel the bacterial population of intestines to a healthier state and they have shown--through experiments in mice--that this reduces cholesterol levels and strongly inhibits the thickened-artery condition known as atherosclerosis.

The scientists, who report their findings in Nature Biotechnology, created a set of molecules called peptides that can slow the growth of less-desirable species of gut bacteria. In mice that develop high cholesterol and atherosclerosis from a high-fat diet, the peptides beneficially shifted the balance of species in the gut microbiome, which refers to the trillions of bacteria that live inside the digestive system. This shift reduced cholesterol levels and dramatically slowed the buildup of fatty deposits in arteries--symptoms that are the hallmarks of atherosclerosis.

Atherosclerosis is the condition that leads to heart attacks and strokes, the two leading causes of death among humans.

"It was surprising to us that simply remodeling the gut microbiome can have such an extensive effect," says study co-senior author.

The gut microbiome, which includes hundreds of bacterial species, evolved long ago as part of a fundamental symbiosis: The bacteria get a place to live and plenty to eat, and in return they assist their animal hosts, largely by helping them digest food.

In the past two decades, these symbiotic bacteria have become a focus of intense study around the world, as scientists have discovered that the microbes--in part by their production of molecules called metabolites--not only help digest food, but play a role in metabolism, immunity and other important functions.

Scientists also have learned that this symbiosis can have a downside for the bacteria's human hosts. When people overuse antibiotics or consume "Western" diets rich in carbs, fats and sugar, the gut microbiome can be altered in ways that promote disease.

Indeed, it now appears that the increased risks of obesity, diabetes, hypertension and atherosclerosis that are conferred by the Western diet are due in part to adverse changes in the microbiome.

That recognition has led researchers to look for ways to remodel the microbiome, with the goal of rolling back those adverse changes to restore good health. Ghadiri and his team have been working on a method that involves delivering small molecules to kill or slow the growth of bad gut bacteria without affecting good gut bacteria.

"Our approach, using small molecules called cyclic peptides, is inspired by nature," says the other co-senior author. "Our cells naturally use a diverse collection of molecules including antimicrobial peptides to regulate our gut microbe populations."

Prior to the experiments, the team already had a small collection of cyclic peptides that had been made using chemistry techniques. For the study, they set up a screening system to determine if any of those peptides could beneficially remodel the mammalian gut microbiome by suppressing undesirable gut bacterial species.

Using mice that are genetically susceptible to high cholesterol, they fed the animals a Western-type diet that swiftly and reliably produces high blood cholesterol and atherosclerosis, as well as adverse shifts in the gut microbiome. The researchers then sampled the animals' gut contents and applied a different cyclic peptide to each sample. A day later, they sequenced the bacterial DNA in the samples to determine which peptides had shifted the gut bacteriome in the desired direction.

The scientists soon identified two peptides that had significantly slowed the growth of undesirable gut bacteria, shifting the species balance closer to what is seen in mice that are fed a healthier diet. Using these peptides to treat atherosclerosis-prone mice that were eating a high-fat Western diet, they found striking reductions in the animals' blood levels of cholesterol compared to untreated mice--about 36 percent after two weeks of treatment. They also found that after 10 weeks, the atherosclerotic plaques in the arteries of the treated mice were about 40 percent reduced in area, compared to those in untreated mice.

The cyclic peptides used in the study apparently interact with the outer membranes of certain bacterial cells in ways that slow or stop the cells' growth. The team have been researching these peptides for years and have put together a set of dozens that show no toxicity to the cells of mammals. The molecules also transit through the gut without entering the bloodstream. In the study, the peptides were delivered to the mice in drinking water and were not associated with any adverse side effects.

Cheered by the proof-of-principle demonstration, the researchers are now testing their peptides in mice that model diabetes, another common condition that has been linked to an unhealthy microbiome.