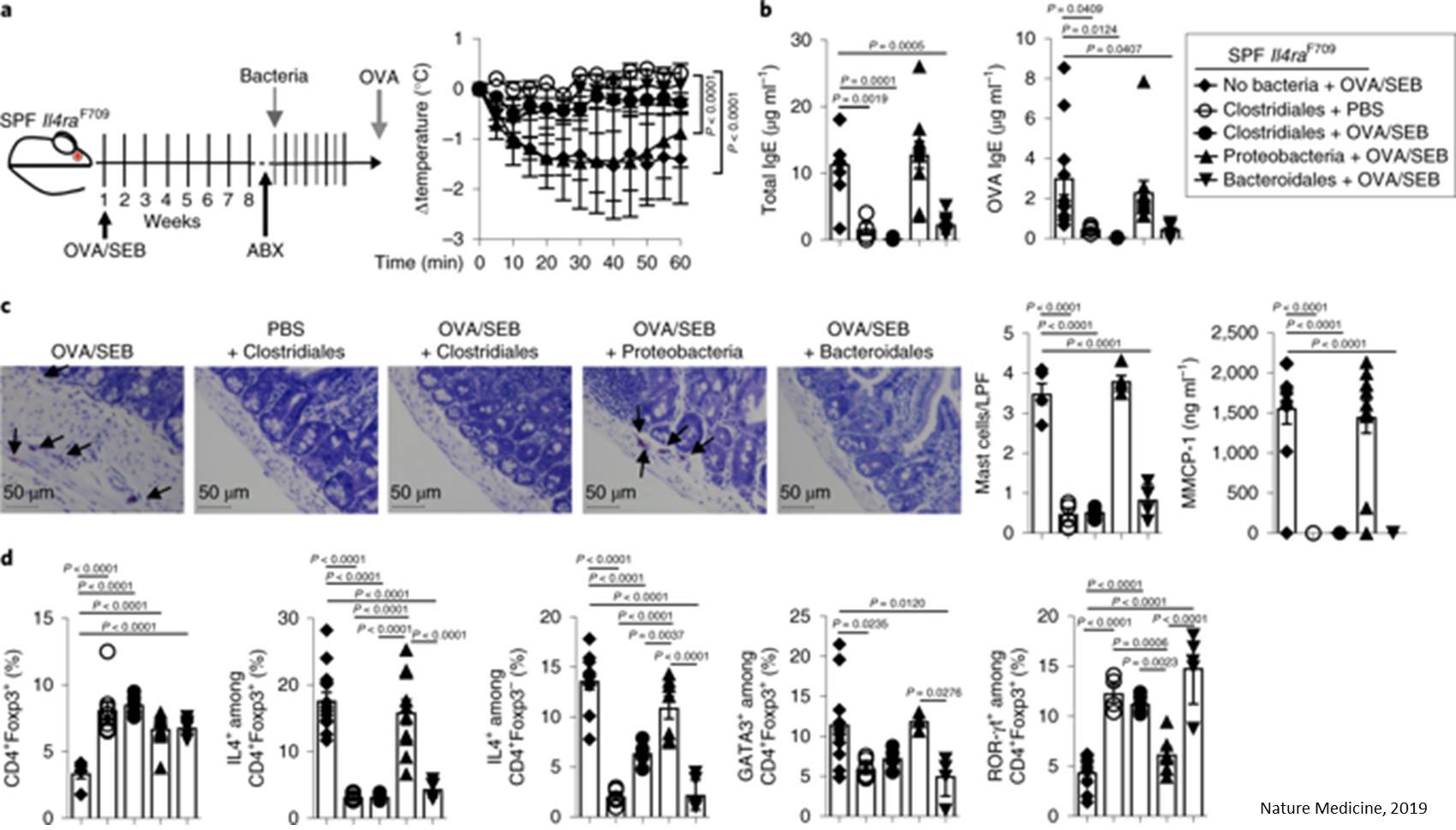 A study by scientists published in Nature Medicine, makes a strong case that the national epidemic of food allergy is caused by the absence of certain beneficial bacteria in the human gut. "The loss of these bacteria acts as a switch that makes children susceptible to food allergy," says a senior author on the paper.

But the study, conducted primarily in mice, also points the way toward treatments that may protect children from developing food allergies -- and reverse the disease in people who already have it. "We're hoping this will lead to a treatment for food allergy, not just a preventative approach," says co-senior author.

For reasons that remain a mystery, the number of Americans who suffer from food allergy has risen sharply over the last decade to as many 32 million, according to one recent estimate. Nearly 8 percent of children in the U.S. -- about two in every classroom -- are affected.

One hypothesis is that certain Western lifestyle factors -- an increase in births by Caesarean section, a decline in breastfeeding, increased use of antibiotics and smaller family sizes, for example -- is disrupting the normal microbial balance in the gut, depriving babies of the "good" bacteria that prepare the immune system to recognize food as harmless.

To find out, the team transplanted fecal bacteria from the babies into a special strain of allergy-prone mice. They fed the mice small doses of chicken egg protein to sensitize their immune systems to this allergen, then challenged the mice with a large dose.

When authors gave a mix of six bacterial species from the order Clostridiales to the mice, which previous studies had suggested might protect against food allergy, the animals were protected from food allergy to chicken egg protein, whereas mice given other common bacteria were not. "If you give them the right bacteria, the Clostridia, they're completely resistant to food allergy," the author says.

When a second mix of unrelated bacteria from the order Bacteroidales. It too was protective. And finally, when the team treated mice that already had food allergy with the Clostridiales or Bacteroidales mixes, they found those therapies completely suppressed the animals' allergic reactions.

The authors believe the study proves that the loss of protective gut bacteria is a critical factor in food allergy. "At the very least it is a fundamental mechanism. And more likely, in my mind, it is the fundamental mechanism on which other things can be layered," the author says.

While previous studies have suggested that certain bacteria can protect against food allergies, the authors go a step further, describing the specific immunological pathway by which the bacteria act in mice. It begins with a protein, known as MyD88, that serves as a "microbial sensor" in the immune system's regulatory T cells.

The authors believe their findings will eventually lead to new treatments that prevent the development of food allergies in newborns at risk. The treatments might take the form of probiotics -- mixes of beneficial bacteria -- or drugs that prime the immune system in the same way.

And for the millions who already suffer from food allergies, the same treatments may be able to reverse their disease. "Remember," the author says, "in adult mice that had become food-allergic, we could suppress their disease by introducing the good bacteria, which means to us there is the potential to treat somebody with established food allergy and reset their immune system in favor of tolerance."

Ultimately, the author cautions, the promising results in mice will have to be duplicated in humans. But that may happen soon. The authors are already conducting a first-of-its-kind clinical trial at Boston Children's to test the safety and efficacy of fecal transplants in adults with peanut allergy. And they note that several companies are already preparing bacterial mixes for clinical trials. "If the race continues with the same intensity, or accelerates, I think you'll see a product on the market within five years," the author predicts.

The brain can be trained to regulate negative emotions