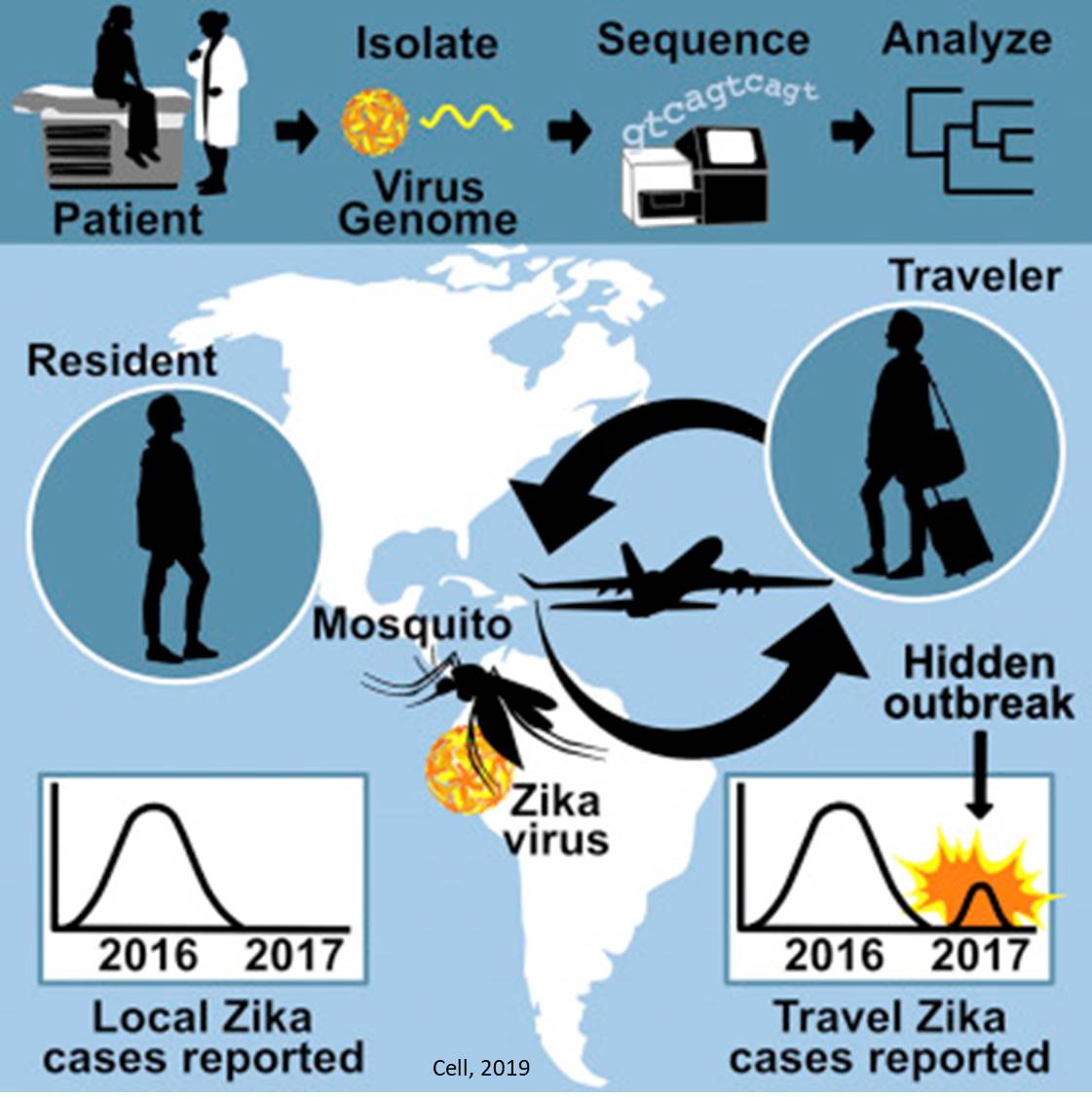 Just when international fears of contracting Zika began to fade in 2017, an undetected outbreak was peaking in Cuba--a mere 300 miles off the coast of Miami. A team of scientists at Scripps Research, working in concert with several other organizations, uncovered the hidden outbreak by overlaying air-travel patterns with genomic sequencing of virus samples from infected travelers. The discovery is featured on the cover of the Cell.

When the mosquito-borne Zika virus was discovered in Brazil during spring of 2015, it had already been circulating for at least a year, making its way to more than 40 countries, the study notes. Very quickly, Zika ascended from a little-known virus to a source of international panic--with worries accentuated by the fact that it could sometimes cause a severe condition known as microcephaly in babies born to women who contracted Zika during pregnancy.

Coordinated response to Zika relied upon countries accurately detecting cases and reporting them to international health agencies. By the end of 2016, data from these health agencies suggested that the epidemic was nearing its end. The virus subsequently fell off travelers' radar, and the World Health Organization ended its designation of Zika as a "Public Health Emergency of International Concern."

However, researchers found that an undetected outbreak was reaching its peak in Cuba at that time, off the radar of international health agencies. Surprisingly, the outbreak lagged other Caribbean countries by a year, likely due to an aggressive mosquito-control campaign that delayed the disease's emergence, according to the study. The researchers noted that other infectious diseases spread by Aedes aegypti mosquitoes, including dengue, also were absent in Cuba at the same time.

The team had no idea it would expose an unknown outbreak when it began investigating travel-associated Zika cases in 2017. The scientists simply wanted to know if the epidemic really was winding down. Instead, they found that a steady number of travelers from the Caribbean were still contracting the virus. With limited access to reliable local case reporting, the team devised a way to estimate local prevalence by obtaining blood samples from infected travelers who had visited Cuba, then using genomic sequencing to reconstruct virus ancestry and outbreak dynamics. The approach is known as "genomic epidemiology."

One of three co-first authors of the study, says all of the Zika viruses from the epidemic in the Americas harkened from a single ancestor, which allowed the team to create a "family tree" and trace the roots of the virus.

By examining tiny genomic changes in each virus sample, the co-author was able to determine a "clock rate" to reveal the age of the virus. The timeline determined that the outbreak in Cuba was established a year later than other outbreaks in the Caribbean. "We realized there was a whole outbreak that had gone undetected," the co-author says.

Another major source of data came from travel surveillance, another co-first author of the study, analyzed airline travel schedules, flight patterns and cruise ship destinations. Together, the information painted a picture of how many people visited Cuba and other Zika-endemic countries during the time period in question.

"Given that undetected viral outbreaks have the potential to spread globally, I hope that this study will encourage utilizing both travel surveillance and genomic data--in addition to local reporting--for future surveillance efforts," the second co-author says.

The lab made its Zika virus sequence data available immediately, highlighting a new framework for how data can be openly shared during public health emergencies.

The team notes that it's still unclear today whether Zika transmission is ongoing, as discrepancies in local reporting continue to hinder detection. While using travelers as sentinels can shed light on outbreaks, as it did in this case, richer public data is necessary to get ahead of threats, Andersen says.

Public health organizations and academic labs must step up their information-sharing practices, the senior author says. That, along with better detection technologies and improved government funding for activities such as mosquito surveillance could help avert future outbreaks.

"So many serious diseases--not just Zika--are almost perfectly linked to fluctuations in mosquito populations, yet this type of data isn't being collected or made available in most places of the world," the senior author says. "Especially as mosquito populations and other animal reservoirs of infectious diseases increase due to climate change and an expanding human population, it is becoming critically important for governments to prioritize this type of proactive monitoring."