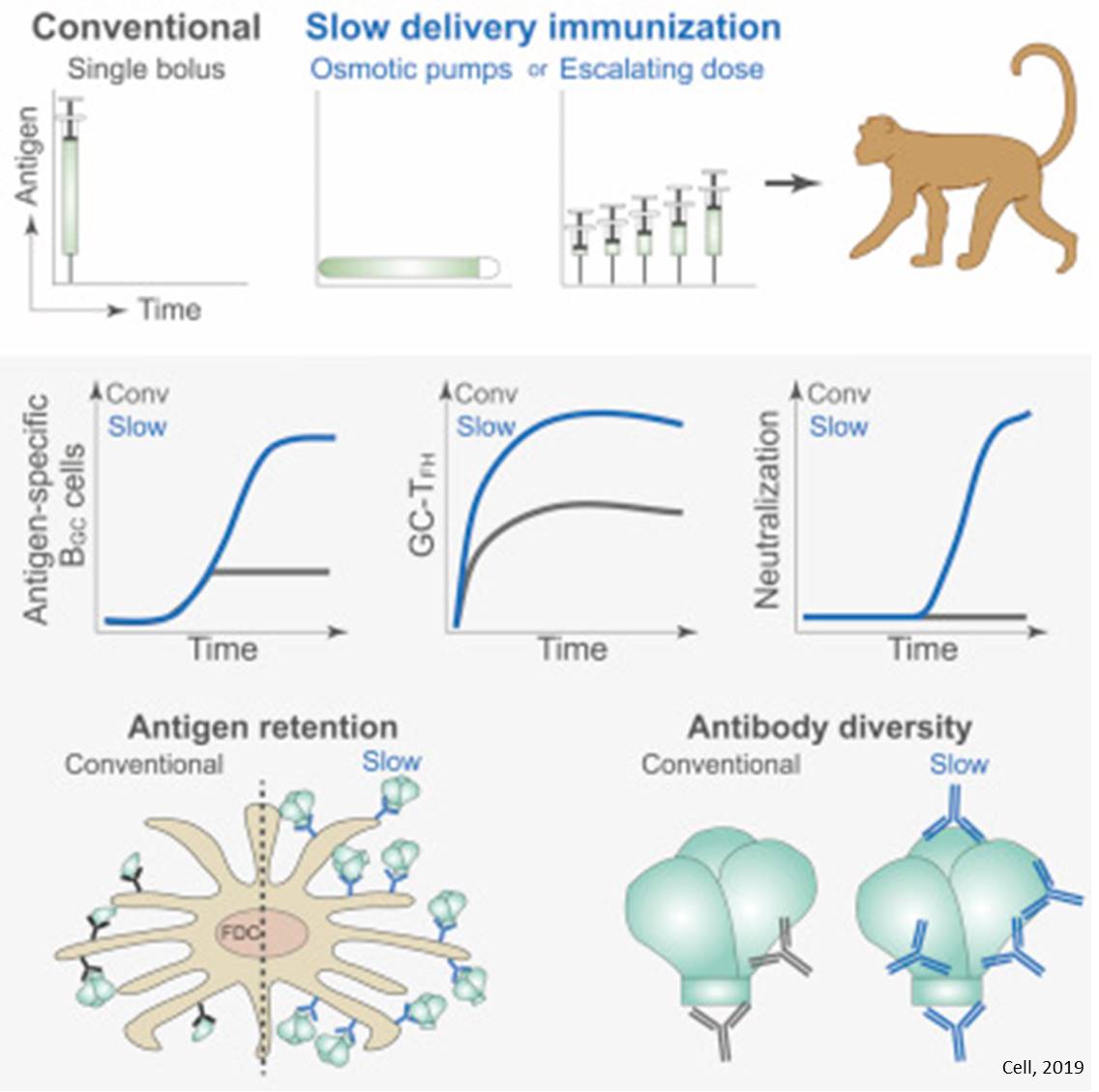 A new HIV vaccine delivery strategy appears to enhance the protective immune response in a preclinical model. Scientists have discovered that delivering an HIV vaccine in small doses over a series of days leads to a stronger immune response than when the same vaccine is given all at once.

A similar escalating dose method could be the best way to administer an HIV vaccine in future clinical trials. "This paper demonstrates the power of the approach," says the leader of the new study, published in the journal Cell.

The new strategy hinges on immune cell teamwork. When you get sick, your immune cells team up to clear the pathogen. Cells that can make antibodies--B cells--move to sites in your lymph nodes, called germinal centers. The B cells that express antibodies with the potential to bind to the pathogen are selected for survival by T follicular helper (TFH) cells. B cells that make the most promising antibodies then advance to further rounds of mutation, testing and antibody refinement.

"It's like physical training--you start off weak and then keep going back to the gym to get stronger," says the first author of the study. "The germinal center is the gym and the B cells have to repeatedly go back to undergo rounds of selection to get better binding."

To beat HIV, B cells generate antibodies that bind to the machinery on the virus that launches the infection. But HIV is a tough opponent--its outer protein shell that can be recognized by antibodies is littered with decoy sites that confuse the immune system. B and TFH cells work toward targeting the decoy sites, not realizing that the antibodies will fail.

"The vast majority of antibodies just bind the wrong places on the virus--so they're useless," says the author.

For the new study, the researchers compared three vaccine dosage strategies to see if one might stand a better chance of prompting neutralizing antibody production. Study collaborators tested the strategies in rhesus monkeys, the best animal model for studying how the human immune system reacts to HIV.

But first, the team needed a window into the immune system. The researchers took advantage of a new technique, adopted recently in the lab, to repeatedly extract small samples of germinal center cells from the lymph nodes. This let them see antibody refinement occurring in real time while leaving the lymph nodes intact and able to keep improving the B cell response in the germinal center.

The traditional vaccine led to a predictably "lousy" immune response dominated by non-neutralizing antibodies. Then the experiment got interesting. To everyone's surprise, the two slow release strategies led to not just more antibodies but better antibodies.

The slow release strategies appeared to keep more B cells activated for longer, giving them time to work with TFH cells and refine antibody strength and binding. As time went on, these B cells actually began producing neutralizing antibodies that could bind to important parts of HIV's structure.

"It was a beautiful thing to get to see what was happening in the lymph nodes over time," says the author.

The study shows that changing a vaccine's delivery, not the vaccine itself, can have dramatic results on its success. "If you change the way the immune system sees viral proteins, it really can make a dramatic difference," the author says.

The next step in this research is to design delivery methods practical for clinical use around the world. The researchers believe methods like degradable capsules could be less cumbersome for patients than osmotic pumps or multiple vaccine doses.

"We might need to think more outside the box to develop vaccines against harder-to neutralize pathogens, including HIV," says the author.