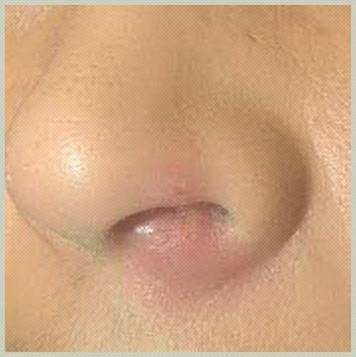 The interior of the nose is a prime dwelling place for some forms of staph. More than one-third of the population has a chronic presence of Staphylococcus aureus in their nostrils and sinuses. From there, it can get onto the hands and other skin areas.

Like many bacteria, Staphylococcus aureus makes the enzyme nitric oxide synthase. In other living things that manufacture nitric oxide, the simple molecule controls many complex biological responses. In people, for example, it mediates blood pressure, nerve signals and sexual arousal.

S. aureus typically grows into a thick group or biofilm. If the bacteria pack densely into a confined location, eventually most of the available oxygen will be consumed.This situation can arise when staph tries to take hold and multiply inside the nose. Mucus in the nose also limits the diffusion of oxygen.

The researchers outlined the biochemical activities stemming from nitric oxide synthase production. These regulate the transport of electrons in the pathogen's cell membrane, and thereby maintain energy from concentration gradients across the membrane.

Also, the researchers said, in view of the many pathogenic and environmental bacteria that produce the enzyme nitric oxide synthase, and the ubiquity of low-oxygen environments in the natural world, this mechanism is likely to be a widespread bacterial response to limited oxygen.

As a survival method, the mechanism may contribute to the virulence and staying power of the disease-inducing staphylococcus bacteria. It also appears to play a role in resistance to the antibiotic daptomycin, which targets the bacterial cell membrane.

The research is published in the journal Nature Microbiology.