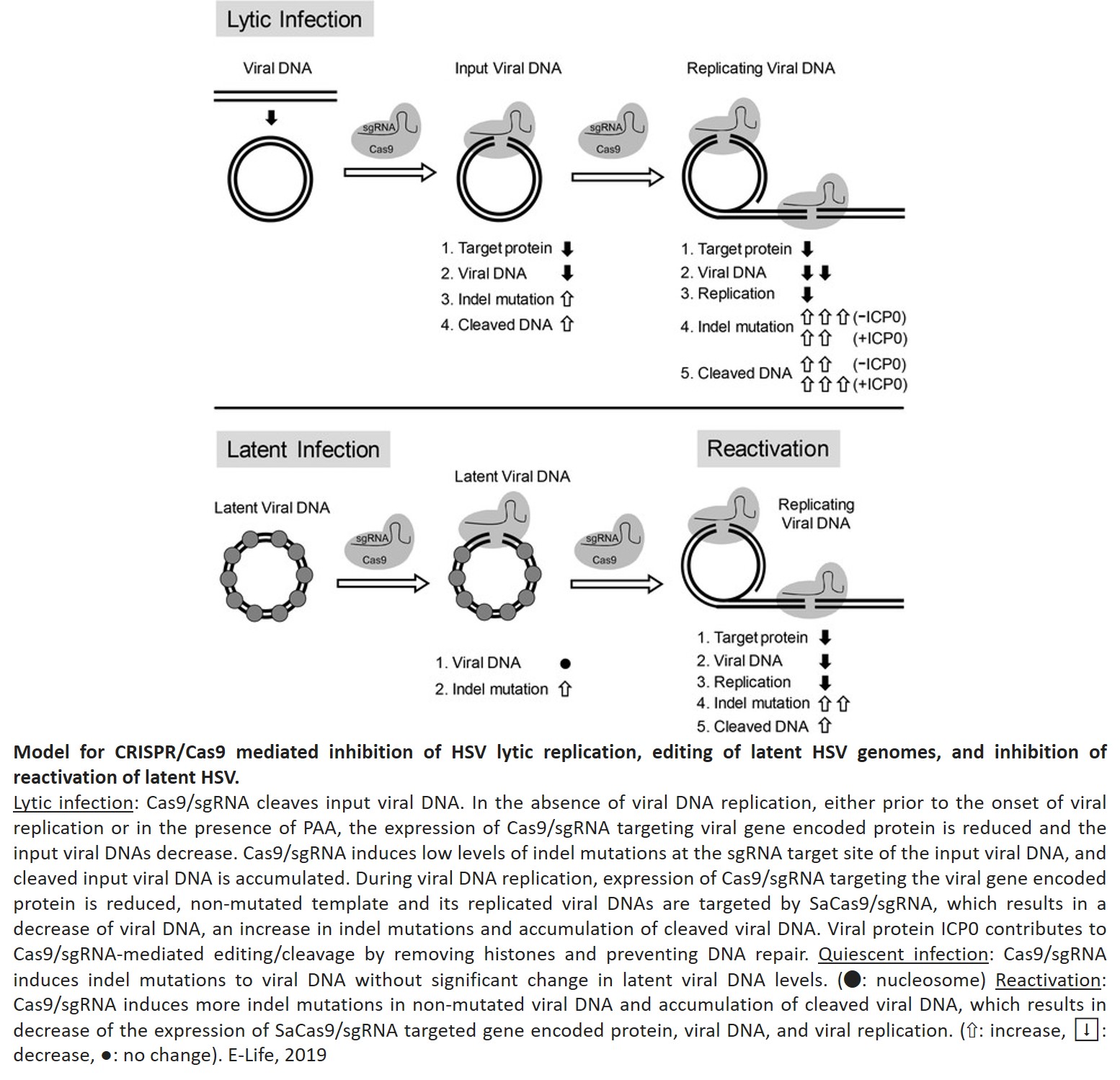 In a first, scientists use gene editing to disrupt both latent and active herpes virus in human cells  The herpes simplex virus, commonly known as the cold sore virus, is a devious microbe.  It enters the body through regions lined with mucous membranes—mouth, nose and genitals—but quickly establishes lifelong viral hideouts inside nerve cells.

After initial infection, the virus lurks dormant only to be reawakened periodically to cause outbreaks marked by the eruption of cold sores or blisters. In a handful of people, the consequences of viral reawakening can be devastating, including blindness and brain inflammation.

Antiviral medications can prevent recurrent outbreaks, but they are not always effective, so for decades, researchers have sought a solution that would quiet the virus for good.

“This is an exciting first step—one that suggests it is possible to permanently silence lifelong infections—but much more work remains to be done,” said study lead investigator .

The experiments also identify the mechanisms by which actively replicating virus becomes uniquely vulnerable to gene editing. These very mechanisms may also explain why latent forms of the virus are less amenable to this technique.

The new findings offer a model system for using gene editing in a localized way to disrupt active replication in specific sites. However, the authors caution, the arch-challenge of delivering gene-editing therapy to neurons—where the virus hides and enters a state of dormancy—remains to be solved, the author added.

More than two-thirds of the world population harbors the virus according to the World Health Organization. While most infections are asymptomatic, in a handful of people HSV can cause serious damage. It can infect the eyes, a condition known as herpes keratitis, and lead to blindness. In people with compromised immune systems, HSV can cause brain inflammation. In newborns, the virus can cause disseminated, systemic disease and brain inflammation and can be fatal in a quarter of infected babies.

Thus, one early therapeutic use of this technique could involve local and limited gene-editing of the epithelial cells in the mouth, eyes or genitals of people with established HSV infections as a way to prevent the virus from causing active outbreaks at vulnerable sites, the author said.

“If you want to prevent corneal infections, for example, you might be able to use CRISPR-Cas9 editing in the corneal cells to prevent new infections or prevent the virus from reactivating or reduce the reactivation,” the author said. “People who have recurrent herpes keratitis infection of the cornea start to go blind after a while because of the reactivation and the resulting inflammation that causes clouding of the cornea.”

The advantage of limited, localized gene-editing is avoiding the widespread, possible off-target effects that might inadvertently alter the DNA of cells other than those intended.

“We still have a long way to go in ensuring hyperprecision and safety of new gene-editing tools so local editing could offer a safer, more limited first step,” the author said.