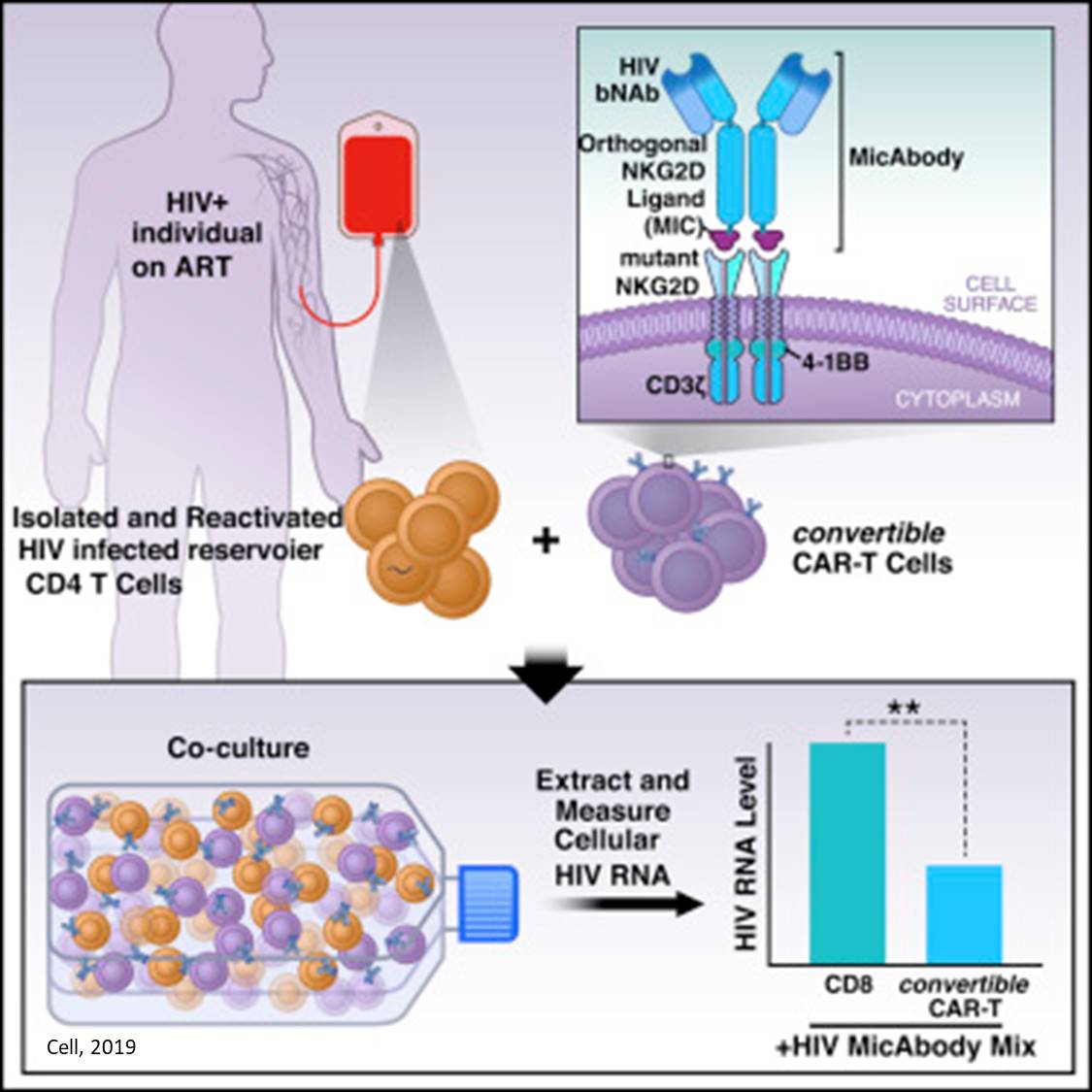 A team of researchers describe a new way of attacking cells infected by HIV in  the journal Cell. The work showcases a novel version of CAR-T, the technology known for its recent successes in fighting blood cancers. With improvements lending it greater breadth of coverage and versatility, the new technology, called convertibleCAR®, shows great promise in several therapeutic areas, particularly in the fight against HIV, as it could be used to shrink the reservoir of infected cells that persists in patients under antiretroviral therapy.

Antiretroviral therapy (ART) suppresses HIV infection but does not eradicate the virus from its hosts. Some virus goes into hiding inside cells, forming what is termed the latent HIV reservoir. From this hideout, the virus is poised to restart a deadly infection as soon as the patient interrupts treatment, forcing patients to adhere to a life-long regimen of daily ART pills.

The latent reservoir is the main barrier to a cure for HIV/AIDS, and targeting it has been a long-standing goal for the senior author. The bigger the reservoir, the harder it is to control, and the faster the virus rebounds upon lapse in treatment.

"Our efforts are focused on shrinking the latent reservoir and engineering an immune response that can control the smaller reservoir, allowing discontinuation of anti-retroviral therapy. This 'reduce-and-control strategy' could lead to a sustained HIV remission or a functional cure," said another author.

Conventional CAR-T technology involves engineering a form of immune cells, known as cytotoxic T cells, to express on their surface a stripped-down version of an antibody. This antibody portion allows the cytotoxic T cell to home in on its target cell--for example, a leukemic cell--and to attack and destroy it. But for each new pathogen or cancer cell, a new conventional CAR-T cell must be manufactured, with a new targeting antibody on its surface. That's time-consuming and costly.

By contrast, the convertibleCAR technology makes it possible to combine the cytotoxic "killer" T cell with any number of antibodies. This feature is crucial for fighting a pathogen such as HIV, of which hundreds of different variants are known to exist.

"This flexible technology has the potential to revolutionize the CAR-T system by allowing a one-time delivery of convertibleCAR cells to the patient and giving the physician the ability to administer the antibody or cocktail of antibodies best suited to treat the patient's disease, be it HIV/AIDS or a leukemia," said the author.

Such applications are promising, but are early in development.

"This study is a proof-of-concept experiment, where we show that it is possible to combine a promising kind of antibody against HIV, known as 'broadly neutralizing antibodies', with convertibleCAR cells to successfully attack the reservoir," said the author.

"We engineered the convertibleCAR cell so the T cell would express on its surface a human receptor protein called NKG2D that had been minimally modified," explained another author. That modified NKG2D receptor can turn the T cell into a potent killer, but only when bound to its partner. Its partner is a protein called MIC-A, which scientists trimmed down and modified so it would bind exclusively to the modified NKG2D receptor on the convertibleCAR cell. Xyphos scientists then fused it to the base of the targeting antibody, creating what they call a MicAbody®. As a result, the targeting MicAbody binds tightly and exclusively to the convertibleCAR cell.

"A MicAbody is an elegant solution, and much easier to create and produce en masse than a whole new CAR-T cell," the author continued. Instead of needing a different CAR cell for each target, scientists can administer a single convertibleCAR cell and combine it with the MicAbodies of their choosing.

In addition, the modified NKG2D-Mic combination provides a convenient means of delivering a kill switch if rogue CAR-T cells need to be eliminated, or a boost if the cells need to be activated after a long rest.
"Because it is modular, we believe convertibleCAR will be safer, more versatile, and amenable to external control than conventional CAR-T," said the author.

The authors tested these combinations on various types of CD4 T cells--the natural targets of HIV--infected in the lab with various HIV strains. In particular, they used a cell preparation derived from human tonsils; tonsil T cells are known to be a latent reservoir. Theey wanted to make sure that the convertibleCAR/Mic-bNAb combination would kill the T cell-types representative of the actual latent reservoir.

In other words, convertibleCAR was demonstrating exactly the versatility and specificity it had been designed to achieve.

Finally, the authors tested whether the convertibleCAR/Mic-bNAb platform could attack the latent reservoir present in the blood of HIV-infected individuals on ART. To make these cells visible to the convertibleCAR cells, the cultures had to first be activated with compounds known as strong "latency-reversing agents".

Within 48 hours of exposure, more than half of the activated, HIV-expressing cells had been wiped out.

But many obstacles remain before this technology can enter the clinic.

For one thing, since the latent reservoir is normally invisible to the immune system, it must first be activated to produce viral proteins that the bNAbs can see and target. The current cornucopia of compounds that can awaken reservoir cells, the latency reversing agents, includes chemicals that are effective but too toxic to be used in patients, or compounds that are safe but not very potent.

"But if we can activate 5 to 10 percent of the reservoir at a time and kill it with convertibleCAR armed with MicAbodies repeatedly and regularly, we could with time significantly reduce the reservoir," said the author.

In addition, convertibleCAR cells produced in the lab might trigger unwanted immune responses in the host, unless they are derived from the patient's own cells. That's an expensive proposition. The authors are currently exploring universal donor cells, cells that are genetically modified to avoid attacking or being rejected by the patient's cells, which could lead to a single convertibleCAR cell for all patients, all targets, and multiple diseases.

With these advances, the promise of convertibleCAR combined with bNAbs is undeniable.

"ConvertibleCAR technology could help propel progress to an HIV cure, especially now that great progress is being made in creating universal donor cells. These cells will eventually reduce the current high cost of this approach," said the author.

Moreover, "the possibility of multiplexing a single convertibleCAR cell with several MicAbodies makes this platform quite promising for tackling other conditions associated with multiple cell or pathogen variants--cancer in particular--and for avoiding the universal problem of drug resistance," said another author. Onco-metabolite from lysine degradation in bacteria!