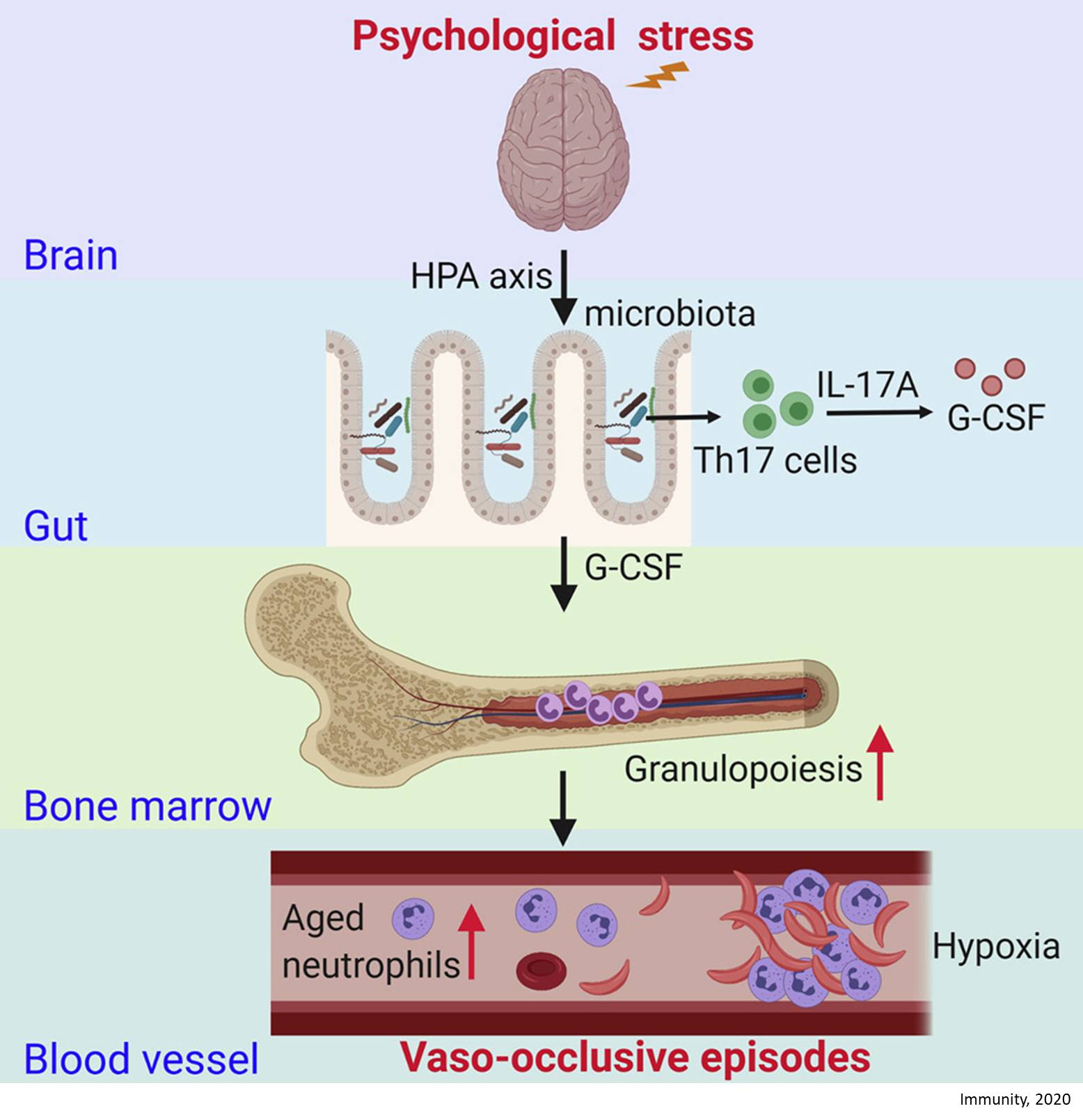 A new study shows how chronic psychological stress leads to painful vessel-clogging episodes--the most common complication of sickle-cell disease (SCD) and a frequent cause of hospitalizations. The findings, made in mice, show that the gut microbiome plays a key role in triggering those episodes and reveals possible ways to prevent them. The research was published in Immunity.

SCD occurs in about 1 in 365 African-American births. People with SCD have inherited a gene mutation that leads to abnormal hemoglobin, causing red cells (which contain hemoglobin) to take on a sickle shape and become less flexible. The sickled red cells tend to clog small vessels, impeding blood flow and preventing oxygen from reaching tissues. This can result in painful and debilitating vaso-occlusive episodes, or VOE, which can last for days. No therapies can reverse VOE and, over time, they cause significant damage to internal organs--the major reason that life expectancy for those with severe SCD is 20 to 30 years shorter than for those without the disease.

"Research for sickle-cell disease is chronically underfunded and those with the condition are in need--and deserve--new treatments that can help address this major health disparity," said study leader . "We hope our most recent findings can help point to novel solutions for treating this painful and deadly disease."

Using a mouse model, the authors found that the path to VOE begins in the brain. Stress triggers the secretion of glucocorticoid hormones in the brain, which make their way to the gut and increase its permeability. This greater permeability allows segmented filamentous bacteria (SFB)--a type of beneficial gut bacteria in mice--to interact with Th17 helper immune cells in the lining of the gut. The SFB stimulate those immune cells to produce pro-inflammatory molecules, which enter the circulation and promote the aging and accumulation of neutrophils, a type of white blood cell. In an earlier study, the laboratory had found that these aged neutrophils are inflammation-inducing cells that drive the VOE.

This chain of events was observed in both SCD mice and healthy mice that were subjected to psychological stress. However, lethal VOE occurred only in the sickle-cell disease mice. "Healthy mice don't have sickled blood cells and therefore don't suffer the ill effects caused by the buildup of aged neutrophils," the senior author noted.

"Importantly, we found we could markedly reduce stress-induced VOE in mice through several different interventions: inhibiting the synthesis of glucocorticoids, depleting SFB, or blocking the inflammatory molecules induced by these bacteria," the author said. "Each of those actions could potentially limit the impact of psychological stress on people with SCD."

While SFB are found only in rodents, some evidence indicates that similar beneficial bacteria in the human gut can also induce Th17 immune cells to produce inflammatory molecules. "We hope to learn whether there is any correlation between the abundance of these bacteria in patients with sickle-cell disease and the frequency or severity of VOEs that affect them," the author said.