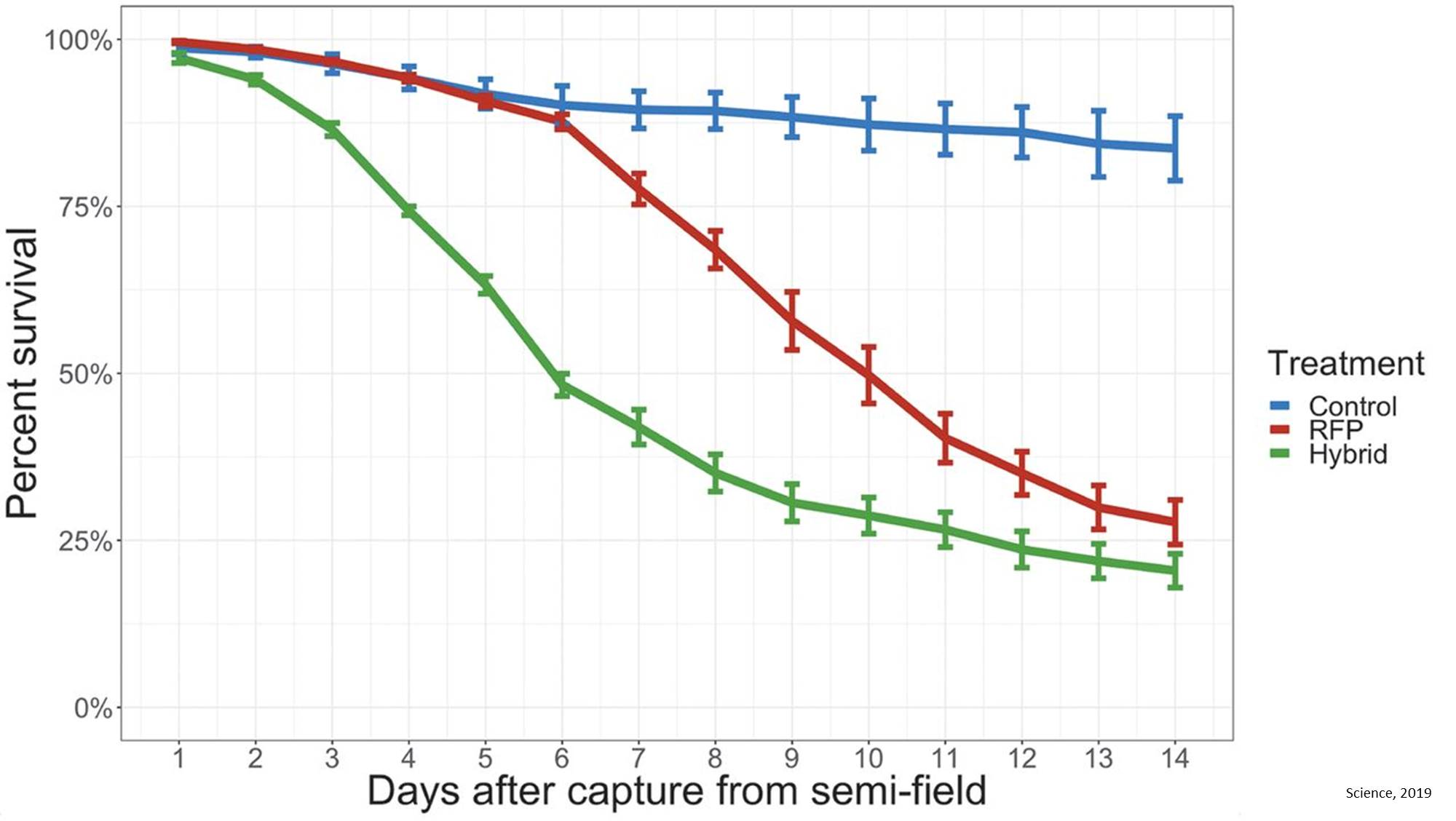 According to the World Health Organization, malaria affects hundreds of millions of people around the world, killing more than 400,000 annually. Decades of insecticide use has failed to control mosquitoes that carry the malaria parasite and has led to insecticide-resistance among many mosquito strains. In response, scientists began genetically modifying mosquitoes and other organisms that can help eradicate mosquitoes. Until now, none of these transgenic approaches made it beyond laboratory testing.

In a research paper published in the journal Science, a team of scientists describe the first trial outside the laboratory of a transgenic approach to combating malaria. The study showed that a naturally occurring fungus engineered to deliver a toxin to mosquitoes safely reduced mosquito populations by more than 99% in a screen-enclosed, simulated village setting in Burkina Faso, West Africa.

"No transgenic malaria control has come this far down the road toward actual field testing," said the lead author of the paper. "This paper marks a big step and sets a precedent for this and other transgenic methods to move forward."

"We demonstrated that the efficacy of the transgenic fungi is so much better than the wild type that it justifies continued development," said  co-author of the study.

The fungus is a naturally occurring pathogen that infects insects in the wild and kills them slowly. It has been used to control various pests for centuries. The scientists used a strain of the fungus that is specific to mosquitoes and engineered it to produce a toxin that kills mosquitoes more rapidly than they can breed. This transgenic fungus caused mosquito populations in their test site to collapse to unsustainable levels within two generations.

"You can think of the fungus as a hypodermic needle we use to deliver a potent insect-specific toxin into the mosquito," said the co-author.

The toxin is an insecticide called Hybrid. It is derived from the venom of the Australian Blue Mountains funnel-web spider and has been approved by the Environmental Protection Agency (EPA) for application directly on crops to control agricultural insect pests.

"Simply applying the transgenic fungus to a sheet that we hung on a wall in our study area caused the mosquito populations to crash within 45 days," the author said. "And it is as effective at killing insecticide-resistant mosquitoes as non-resistant ones."

The laboratory tests suggest that the fungus will infect the gamut of malaria-carrying mosquitoes. The abundance of species that transmit malaria has hindered efforts to control the disease, because not all species respond to the same treatment methods.

To modify the fungus Metarhizium pingshaense so that it would produce and deliver Hybrid, the used a standard method that employs a bacterium to intentionally transfer DNA into fungi. The DNA the scientists designed and introduced into the fungi provided the blueprints for making Hybrid along with a control switch that tells the fungus when to make the toxin.

The control switch is a copy of the fungus' own DNA code. Its normal function is to tell the fungus when to build a defensive shell around itself so that it can hide from an insect's immune system. Building that shell is costly for the fungus, so it only makes the effort when it detects the proper surroundings--inside the bloodstream of a mosquito.

By combining the genetic code for that switch with the code for making Hybrid, the scientists were able to ensure that their modified fungus only produces the toxin inside the body of a mosquito. They tested their modified fungus on other insects in Maryland and Burkina Faso, and found that the fungus was not harmful to beneficial species such as honeybees.

"These fungi are very selective," the author said. "They know where they are from chemical signals and the shapes of features on an insect's body. The strain we are working with likes mosquitoes. When this fungus detects that it is on a mosquito, it penetrates the mosquito's cuticle and enters the insect. It won't go to that trouble for other insects, so it's quite safe for beneficial species such as honeybees."
After demonstrating the safety of their genetically modified fungus in the lab, the authors worked closely with scientific colleagues and government authorities in Burkina Faso to test it in a controlled environment that simulated nature. In a rural, malaria-endemic area of Burkina Faso, they constructed a roughly 6,550-square-foot, screened-in structure they called MosquitoSphere. Inside, multiple screened chambers contained experimental huts, plants, small mosquito-breeding pools and a food source for the mosquitoes.

In one set of experiments, the researchers hung a black cotton sheet coated with sesame oil on the wall of a hut in each of three chambers. One sheet received oil mixed with the transgenic fungus Metarhizium pingshaense, one received oil with wild-type Metarhizium and one received only sesame oil. Then, they released 1,000 adult male and 500 adult female mosquitoes into each chamber of MosquitoSphere to establish breeding populations. The researchers then counted mosquitoes in each chamber every day for 45 days.

In similar experiments in the lab, the scientists also found that females infected with transgenic fungus laid just 26 eggs, only three of which developed into adults, whereas uninfected females laid 139 eggs that resulted in 74 adults.

According to the researchers, it is critically important that new anti-malarial technologies, such as the one tested in this study, are easy for local communities to employ. Black cotton sheets and sesame oil are relatively inexpensive and readily available locally. The practice also does not require people to change their behavior, because the fungus can be applied in conjunction with pesticides that are commonly used today.

"By following EPA and World Health Organization protocols very closely, working with the central and local government to meet their criteria and working with local communities to gain acceptance, we've broken through a barrier," the author said. "Our results will have broad implications for any project proposing to scale up new, complex and potentially controversial technologies for malaria eradication."
Next, the international team of scientists hope to test their transgenic fungus in a local village or community. There are many regulatory and social benchmarks to meet before deploying this new method in an open environment such as a village, but the researchers said this study helps make the case for such trials.