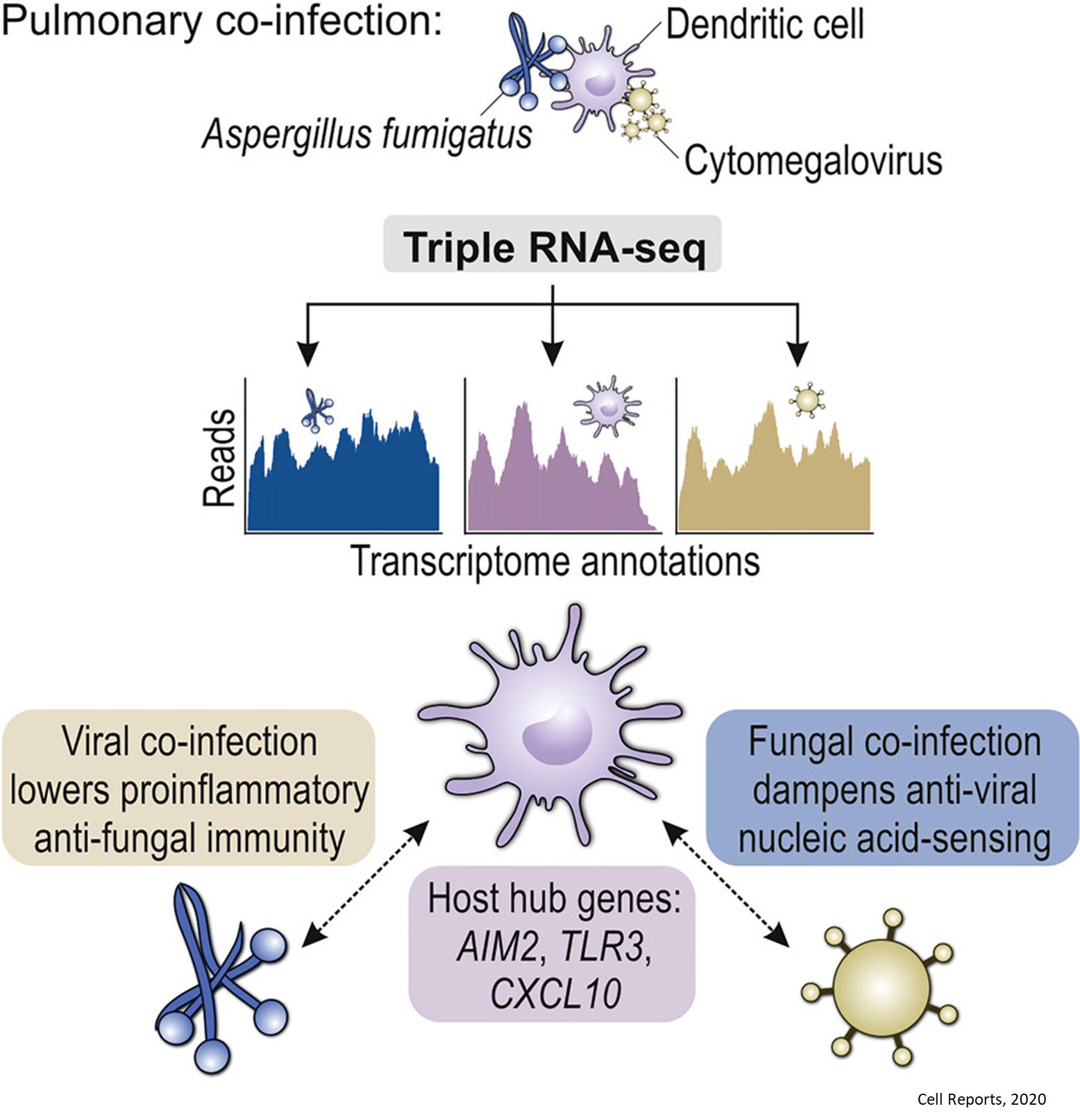 Organ and stem cell transplants are proven and frequently used methods in everyday modern clinical practice. However, even when performed regularly in specialized centers, some patients still experience a number of serious complications afterwards. Among other things, infections with fungi and viruses can jeopardize therapeutic success. For example, coinfection with cytomegalovirus, which belongs to the family of Herpes viruses, and the fungus Aspergillus fumigatus can be critical. This combination of pathogens poses a serious medical threat in organ and stem cell transplantation.

A team of scientists from several German research institutions and clinics has now developed a new method to examine these two pathogens, their interaction with each other and with the human cells infected by them. The central result: coinfection with the two pathogens is more "than the sum of its parts". Viruses and fungi interact synergistically in the human organism, where they trigger certain genes that only become active when infected with both pathogens simultaneously. The results have now been published in the journal Cell Reports.

The term "RNA-seq" is short for RNA-sequencing: This technique enables the simultaneous and precise determination of the activities of thousands of genes at the RNA level in a high-throughput process, thus enabling the identification and better understanding of the changes occurring in the course of diseases. The development of dual RNA sequencing has made it possible to document not only the gene activity of a pathogen, but also the reaction of the host cell affected by it. This has enabled scientists to trace complex causal chains over the course of an infection.

Now, Triple RNA sequencing dissects the gene expression of three players and their interplay in infection processes. "Up to now, science has in many cases not known why an infection with a certain pathogen can make the affected person more susceptible to an infection with a second pathogen," explains the author. In such cases, dual RNA-seq was insufficient to provide the desired answers.

In their study, the researchers used the triple RNA-seq method they developed to investigate what happens when certain cells of the immune system (known as monocyte-derived dendritic cells) are infected with both Aspergillus fumigatus and the human cytomegalovirus.

They were able to prove that the two pathogens influence each other, whilst also simultaneously affecting the immune cell in a different way than one pathogen alone otherwise would. For example, the cytomegalovirus weakened the fungal-mediated activation of pro-inflammatory signals, while Aspergillus affects viral clearance - the time it takes for the virus to become undetectable in tests.

At the same time, the team has identified specific genes in immune cells whose expression profiles differ significantly during an infection with both pathogens, compared to a single infection. These genes could thus serve as biomarkers for the timely identification of a co-infection after transplantation.

The scientists now hope that the triple RNA-seq technology will also help to better understand other cases of common infections, such as viruses and bacteria, and to prevent their potentially serious consequences. "Promising models for understanding how an infection makes the host more susceptible to another pathogen include certain strains of Salmonella and the human immunodeficiency virus (HIV), streptococci and influenza virus, or Chlamydia and human herpes virus," says the senior author author.