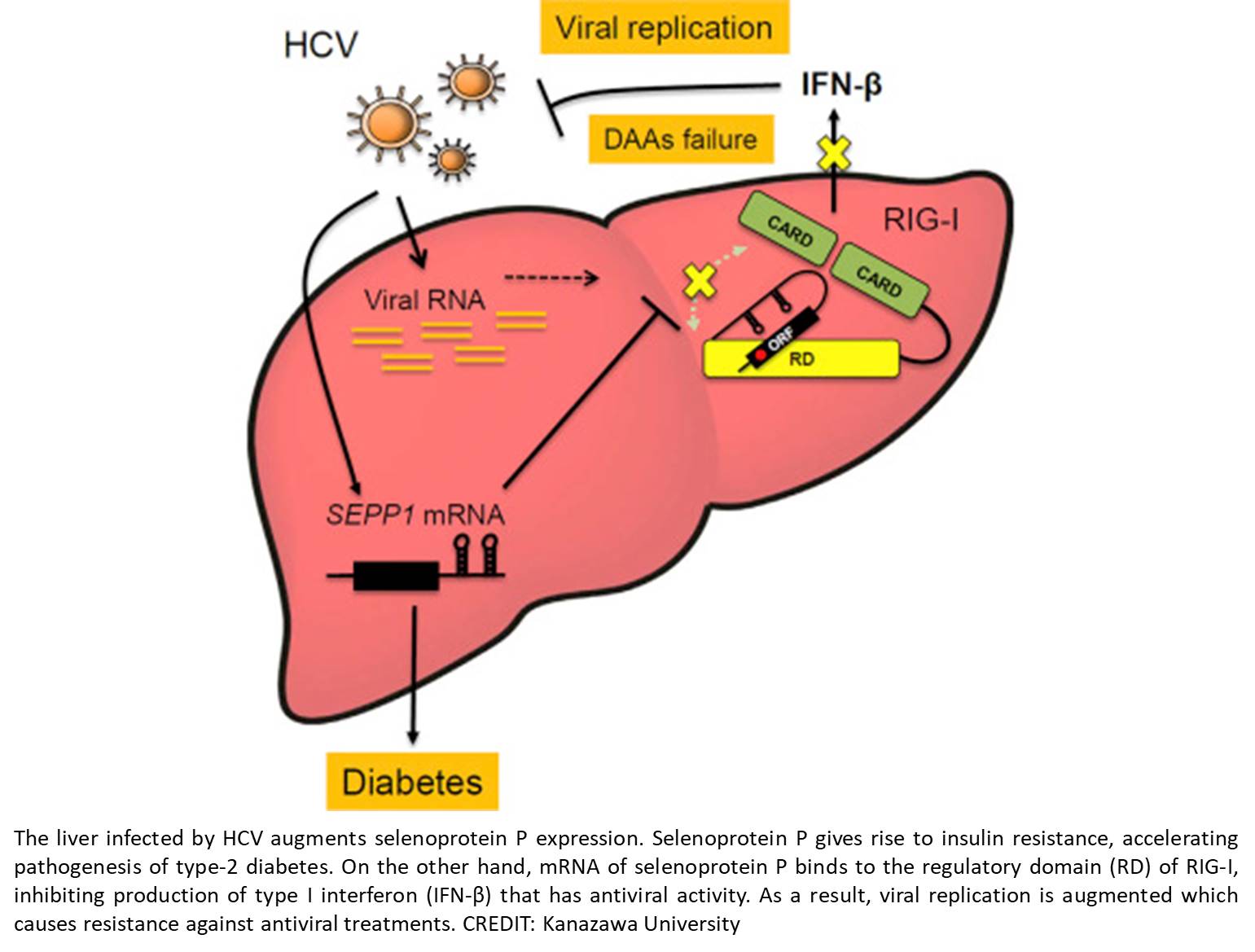 Hepatitis C Virus (HCV) is a hepatotropic virus, ~80 million chronic infections being confirmed worldwide. HCV infection leads to the development of chronic hepatitis, cirrhosis, and in some instances, hepatocellular carcinoma. The recent development of highly potent direct-acting antiviral drugs (DAAs), targeting viral proteins, facilitates virus elimination in >90% of treated individuals. However, the mechanism of DAA failure in the remaining 10% is not understood.

The liver is a vital organ with functions in the metabolism of carbohydrates, proteins, and lipids, the clearance of toxins and pathogens, and the regulation of immune reactions. Previously, the present research group discovered selenoprotein P (SeP), a liver-derived secretory protein contributes to the induction of insulin resistance and is involved in the pathogenesis of type 2 diabetes. Interestingly, patients with both chronic hepatitis C (CHC) and type 2 diabetes are reported to show a tendency to be unresponsive to DAAs. In the present study, the group investigated the pathogenic and clinical relationship of HCV infection and type 2 diabetes, focusing on SeP.

The group investigated the effects of SeP on antiviral immune responses in the liver, using cultured cells, mice and clinical specimens. It was found that HCV infection augmented SeP expression in cultured cells. By analyzing clinical specimens, it was found that serum SeP levels were higher in HCV-infected patients than healthy controls and that treatment with DAAs was less effective in patients with higher levels of SeP expression.

On the other hand, a remarkable repression of HCV replication was observed in the cultured cells with suppressed expression of SeP. These cells were also found to have an augmented production of interferon (IFN), which has antiviral activity. Humans are known to have a system to detect virus invasion into cells and to induce IFN production. It is reported that RIG-I) and MDA5 (melanoma differentiation-associated gene 5) recognize virus-derived RNA and induce IFN production. Although RIG-I and MDA5 have a highly homologous helicase domain), they recognize different RNAs depending upon RNA structure as well as base alignment (PAMP: pathogen-associated molecular pattern). HCV is thought to be recognizable by both RIG-I and MDA5. By performing experiments using a RIG-I knockout cell line and a MDA5 knockout cell line, SeP was found to specifically regulate RIG-I pathway-dependent innate immune responses.

In more detailed experiments using purified SeP and synthetic RNA, repression of innate immunity by SeP was shown to be brought about not by the protein but by the SeP mRNA. Upon binding of a viral RNA to RIG-I, the ATPase activity of RIG-I is stimulated to induce a three-demensional structural change and oligomerization of RIG-I, which binds to mitochondrial antiviral signaling protein to activate IFN production. It was found that overexpression of SeP mRNA inhibited the ATPase activity important in the RIG-I activation steps: oligomerization of RIG-I and RIG-I localization to mitochondria. SeP mRNA, by binding to and interacting with the regulatory domain (RD) of RIG-I protein that specifically recognizes and captures viral RNA, inhibited the three-dimensional structural change necessary for RIG-I activation, and negatively regulated innate immunity.