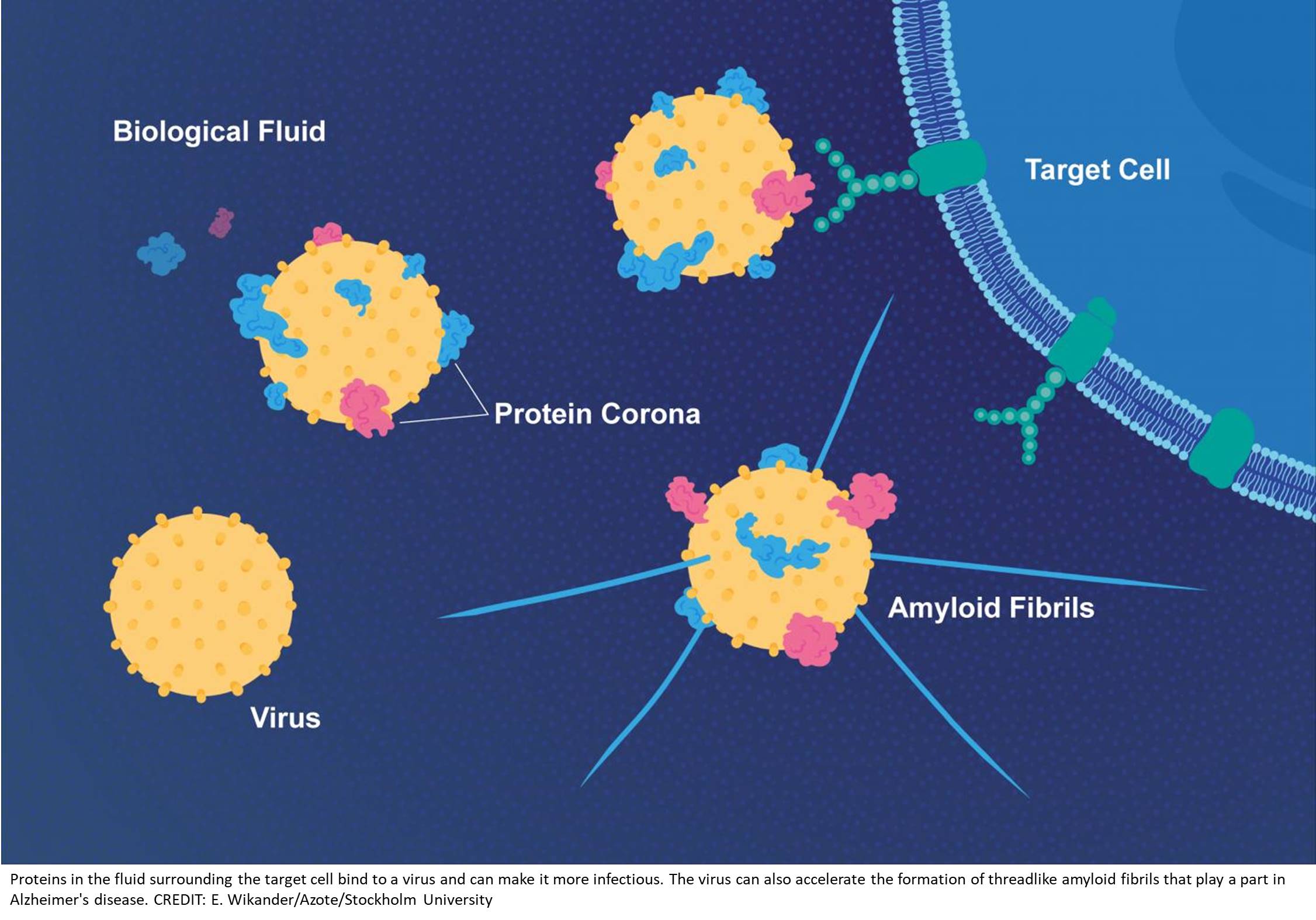 New research shows that viruses interact with proteins in the biological fluids of their host which results in a layer of proteins on the viral surface. This coat of proteins makes the virus more infectious and facilitates the formation of plaques characteristic of neurodegenerative diseases such as Alzheimer's disease.

Are viruses dead or alive? Well... both. Viruses can only reproduce inside living cells and exploit the cellular machinery of their host to their benefit. However, before entering a host cell, viruses are just nanometer-sized particles, very similar to artificial nanoparticles used in medical applications for diagnosis and therapy. Scientists from have found that viruses and nanoparticles share another important property; they both become covered by a layer of proteins when they encounter the biological fluids of their host before they find their target cell. This layer of proteins on the surface influence their biological activity significantly.

"Imagine a tennis ball falling into a bowl of milk and cereals. The ball is immediately covered by the sticky particles in the mix and they remain on the ball when you take it out of the bowl. The same thing happens when a virus gets in contact with blood or lung fluids that contain thousands of proteins. Many of these proteins immediately stick to the viral surface forming a so-called protein corona", the author explains.

Researchers studied the protein corona of respiratory syncytial virus (RSV) in different biological fluids. RSV is the most common cause of acute lower respiratory tract infections in young children worldwide, leading up to 34 million cases and 196,000 fatalities each year. "The protein corona signature of RSV in the blood is very different from that in lung fluids. It is also different between humans and other species such as rhesus macaque monkeys, which also can be infected with RSV", the author says. "The virus remains unchanged on the genetic level. It just acquires different identities by accumulating different protein coronae on its surface depending on its environment. This makes it possible for the virus to use extracellular host factors for its benefit, and we've shown that many of these different coronae make RSV more infectious."

The researchers have also found that viruses such as RSV and herpes simplex virus type 1 (HSV-1) can bind a special class of proteins called amyloid proteins. Amyloid proteins aggregate into plaques that play a part in Alzheimer's disease where they lead to neuronal cell death. The mechanism behind the connection between viruses and amyloid plaques has been hard to find till now, but the researchers found that HSV-1 is able to accelerate the transformation of soluble amyloid proteins into thread-like structures that constitute the amyloid plaques. In animal models of Alzheimer's disease, they saw that mice developed the disease within 48 hours of infection in the brain. In absence of an HSV-1 infection the process normally takes several months.

"The novel mechanisms described in our paper can have an impact not only on understanding new factors determining how infectious a virus is, but also on devising new ways to design vaccines. In addition, describing a physical mechanism that links viral and amyloid causes of disease adds weight to the increasing research interest in the role of microbes in neurodegenerative disorders such as Alzheimer's disease and opens up new avenues for treatments.", the author says.