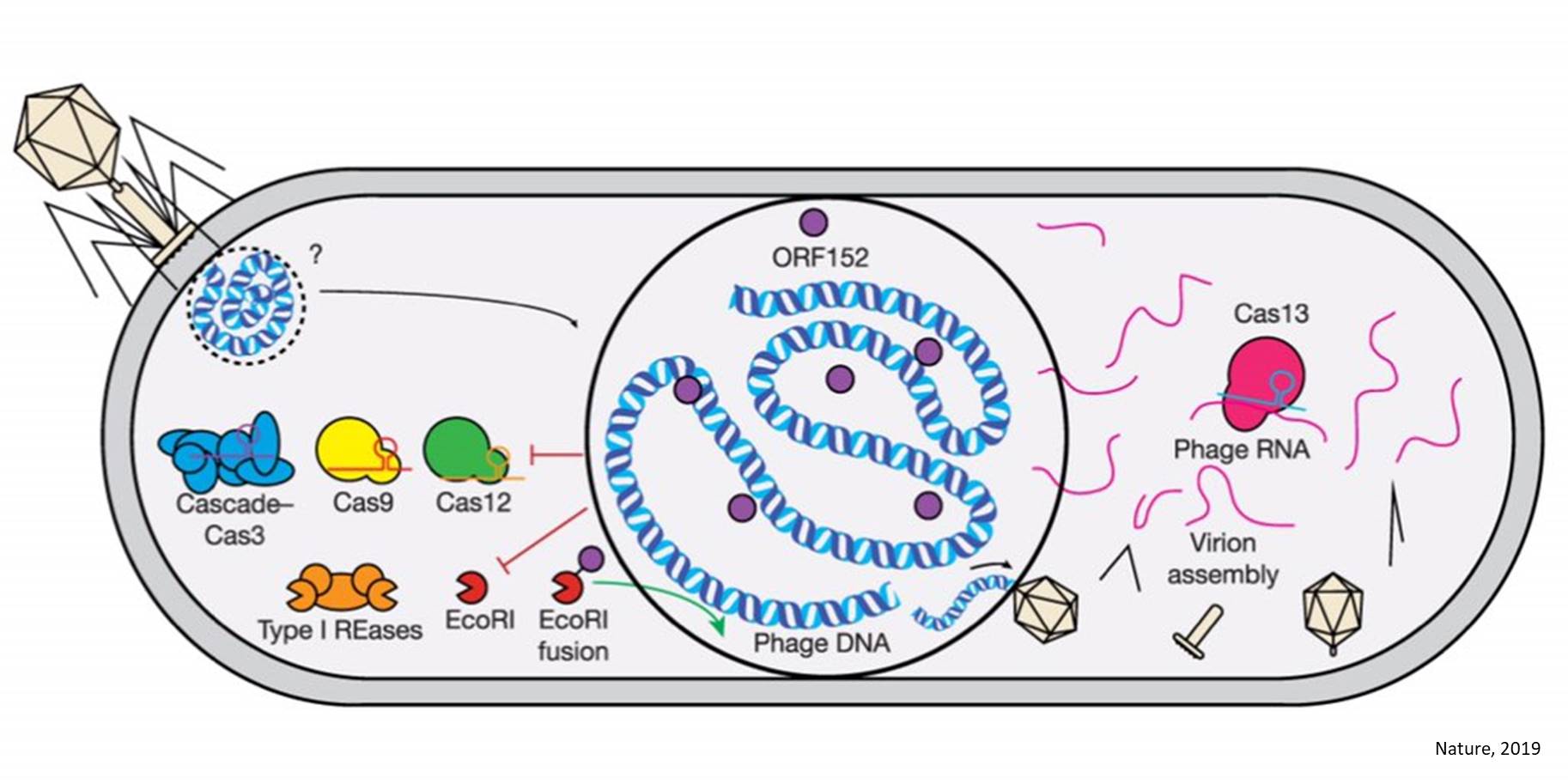 Bacteria and the viruses that infect them are engaged in a molecular arms race as ancient as life itself. Evolution has equipped bacteria with an arsenal of immune enzymes, including CRISPR-Cas systems, that target and destroy viral DNA. But bacteria-killing viruses, also known as phages, have devised their own tools to help them outmaneuver even the most formidable of these bacterial defenses.

Now, scientists have discovered a remarkable new strategy that some phages employ to avoid becoming the next casualty of these DNA-dicing enzymes: after they infect bacteria, these phages construct an impenetrable "safe room" inside of their host, which protects vulnerable phage DNA from antibacterial enzymes. This compartment, which resembles a cell nucleus, is the most effective CRISPR shield ever discovered in viruses.

"In our experiments, these phages didn't succumb to any of the DNA-targeting CRISPR systems they were challenged with. This is the first time that anyone has found phages that exhibit this level of pan-CRISPR resistance," said the senior researcher, who published the work in the journal Nature.

To find CRISPR-resistant phages, the researchers selected viruses from five different phage families and used them to infect a common bacteria that had been genetically engineered to deploy four different Cas enzymes, the DNA-cutting component of CRISPR systems.

These CRISPR-fortified bacteria emerged victorious against most of the phages they faced off against. But two jumbo phages -- so named because their genomes are five to 10 times larger than the genomes of the most well-studied phages -- were found to be impervious to all four CRISPR systems.

The researchers decided to put these jumbo phages to the test and probe the limits of their CRISPR-resistance. They exposed them to bacteria outfitted with a completely different type of CRISPR, as well as bacteria equipped with restriction-modification systems -- a DNA-cleaving enzyme that's more common than CRISPR (restriction systems are found in about 90 percent of bacterial species, whereas as CRISPR is present in only about 40 percent) -- but which can only target a limited number of DNA sequences. The results were the same as before: petri dishes littered with the exploded remains of phage-infected bacteria.

"It was really surprising because we engineered the bacteria to massively overproduce components of the immune system, but none of them could cut the phage DNA. These phages were resistant to all six bacterial immune systems tested. No other phage even comes close," said the author.

Jumbo phages, it seemed, were virtually indestructible. But test tube experiments suggested otherwise -- jumbo phage DNA was, in fact, as vulnerable to CRISPR and restriction enzymes as any other DNA. The CRISPR resistance that was observed in phage-infected cells had to be the result of something the viruses were producing that interfered with CRISPR. But what?

Anti-CRISPRs were an obvious culprit. These proteins, first discovered by the senior author in 2013, are potent CRISPR inactivators encoded in some phage genomes. But when the researchers analyzed the jumbo phage genome sequences, anti-CRISPR genes were nowhere to be found. Plus, every known anti-CRISPR can only disable specific CRISPR systems, whereas jumbo phages were resistant to every antiviral enzyme thrown at them. Whatever was protecting jumbo phage DNA had to be based on some other mechanism.

Microscope-based experiments finally revealed what was happening. When these jumbo phages infect bacteria, they build a spherical compartment in the middle of the host cell, which keeps antiviral enzymes at bay and provides a "safe room" for the viral genome to replicate.

This compartment, it turns out, was identical to one first discovered in 2017 by UCSD Professor Joe Pogliano, PhD, and UCSF Professor David Agard, PhD, both of whom are co-authors of the new study. Though these researchers previously demonstrated that the phage genome replicated in this nucleus-like shell, nobody knew until now that the shell also serves as an impenetrable shield against CRISPR and other DNA-dicers.

Still, many questions about the shell and the viruses that build it remain unanswered, including fundamental details about the protein from which the shell is constructed.

"This was one of many hypothetical proteins that was found when these phages were sequenced. It seems like it's unique to phages, but it's not common. It's not even found in some closely related phages. We also don't know what the protein structure looks like at the atomic level," said the author.

But the shell's protein building blocks aren't the only mystery that the authors are eager to tackle. While the researchers were monitoring phage-infected bacteria under the microscope, they noticed something unusual: while the phage's safe room is being assembled, a process that takes about 30 minutes, its genome remains at the site where it was injected into the host cell. During this time, the phage genome would seem to be vulnerable to any antiviral enzymes floating around the host cell. But somehow, the genome remains intact while the safe room is under construction.

"We think some kind of pre-shell is protecting the injected DNA early on. It's like an armor that's shed once the shell is finally assembled. But we don't know what that armor is," said the author, who is eager to figure out how these phages protect themselves from CRISPR at every step of the viral life cycle.

The researchers also discovered that the shell isn't as impenetrable as the initial experiments suggested. With some clever engineering, the study's lead author found a way to bypass the nucleus-like shield by attaching a restriction enzyme to one of the viral shell proteins. This Trojan horse strategy allowed the DNA-dicing restriction enzyme to sneak into the shell as it was being assembled and chop up the phage genome inside of what was supposed to be an immunity-free zone, which allowed the bacteria to survive.

This experiment is especially exciting to the researchers because it shows that there are in fact ways that the "impenetrable" safe room can be breached. And given that bacteria and phages are always finding new ways to sabotage one another's defenses, the senior author believes that scientists will eventually find that bacteria are already armed with the tools needed to break through or bypass this nucleus-like compartment.

"We're looking for ways that bacteria get around the shell. There's no way this is the be-all and end-all in this fight," said the senior author. "Maybe there are bacteria that fuse an immunity enzyme to a phage protein and finds its way into the shell. Or maybe bacteria steal a phage gene and use it against the phage. I think we'll eventually find that bacteria have come up with lots of ways to fight against phages that build these shells, and we'll probably be surprised by how they do it."