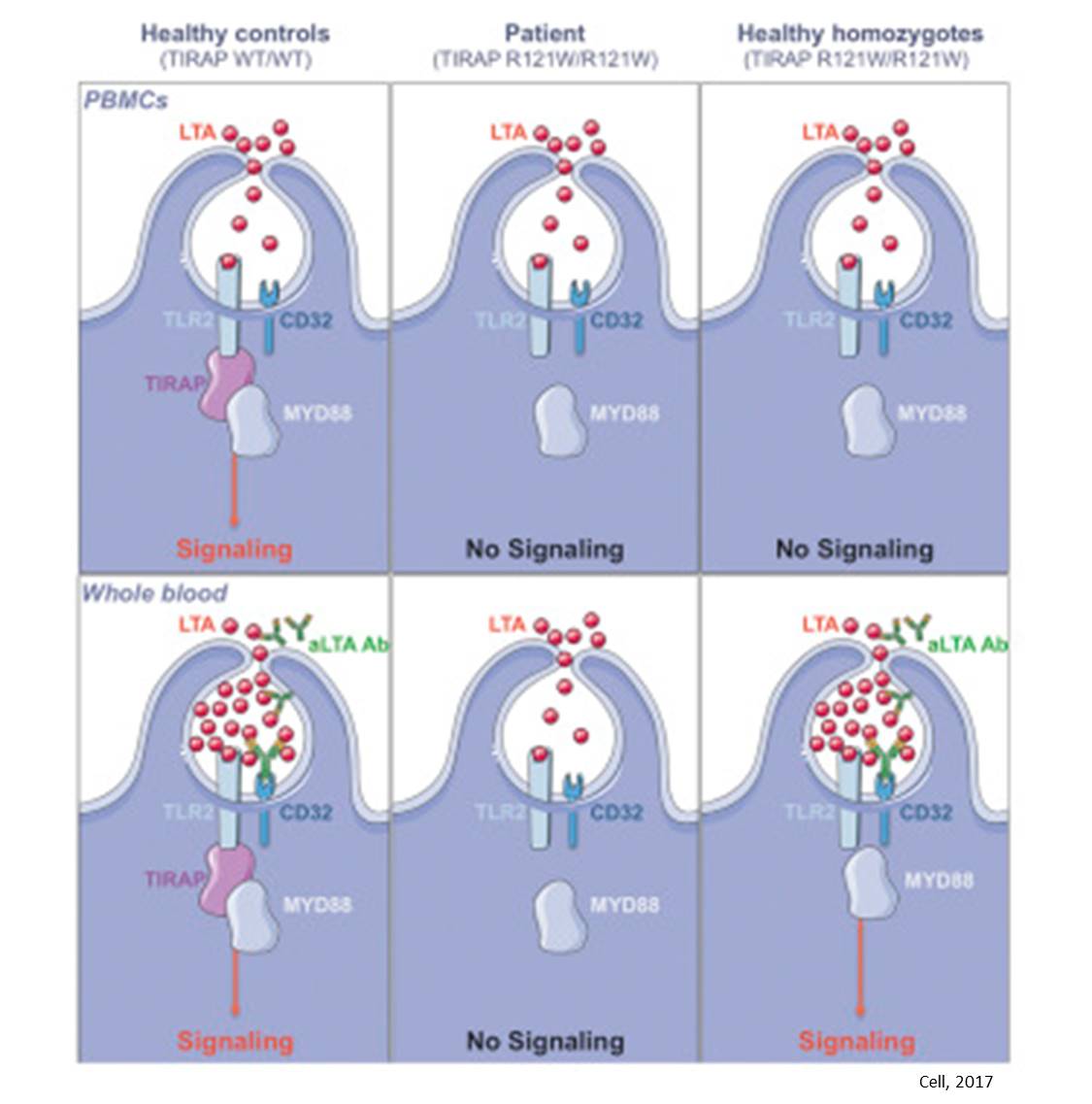 As much as we try to avoid it, ­we are constantly sharing germs with those around us. But even when two people have the same infection, the resulting illnesses can be dramatically different--mild for one person, severe or even life-threatening for the other.

In the research, published in Cell, the team focused on the case of an otherwise healthy young girl who developed a life-threatening infection from a very common strain of bacterium. Most of us carry this microbe, known as Staphylococcus aureus, on our skin and in our nostrils. It can cause minor infections (often referred to as "staph infections"), but in some people, it results in severe disease.

The young girl's illness was mysterious: she had no known risk factors that would lead her to develop the acute form of the disease, and none of her family members had contracted it. So the team set out to define the underlying cause of her disease by searching her DNA for mutations that might make her more susceptible to staph disease.

They quickly identified a likely culprit--a single letter substitution in the two copies of a gene that encodes for a protein known as TIRAP, used by specific immune cells to flag invading bacteria.

In laboratory experiments, the researchers found that TIRAP is critical for cells in the immune system's first line of defense against invaders. These are cells that develop before we are born, with built-in recognition systems for a host of molecules that are frequently present on the surface of invaders.

But things turned out to be more complicated. To test his hypothesis, researchers decided to analyze the DNA of other members of the patient's family. They hadn't suffered from severe staph infections, so they should have had normal TIRAP genes. However, the team found the opposite--all seven members of her family had the same mutation as the young patient.

The researchers now had two questions instead of just one: Why did this child get the invasive disease? And why were the rest of her family seemingly immune, even though they shared her immune-compromising mutation?

The answers lie in a second line of immune defense that is not encoded within our DNA at birth. These secondary defenses are dependent on cells that generate antibodies against foreign compounds. "This is not something we are born with, but instead it is resistance that we acquire over the course of our lifetime when we are exposed to new pathogens," author explains.

The researchers found that the patient lacked antibodies against a single molecule, known as LTA (staphylococcal lipoteichoic acid), but the levels were normal for all of her family members. LTA is present on the surface of staphylococcal bacteria, and normally it is recognized by immune cells in both lines of defense.

The antibodies against LTA were able to restore the function of the patient's immune cells in culture systems, and the researchers went on to confirm their hypothesis using a mouse model of the disease.

The results explain both why the patient developed life-threatening disease and why her family members didn't. "Her illness likely resulted from failures in both lines of immunity. In her family, the second layer of defense compensated for genetic defects in the first," explains the author. "More broadly, it offers insight into how two people with the same infection, and even the same DNA, can have very different illnesses."