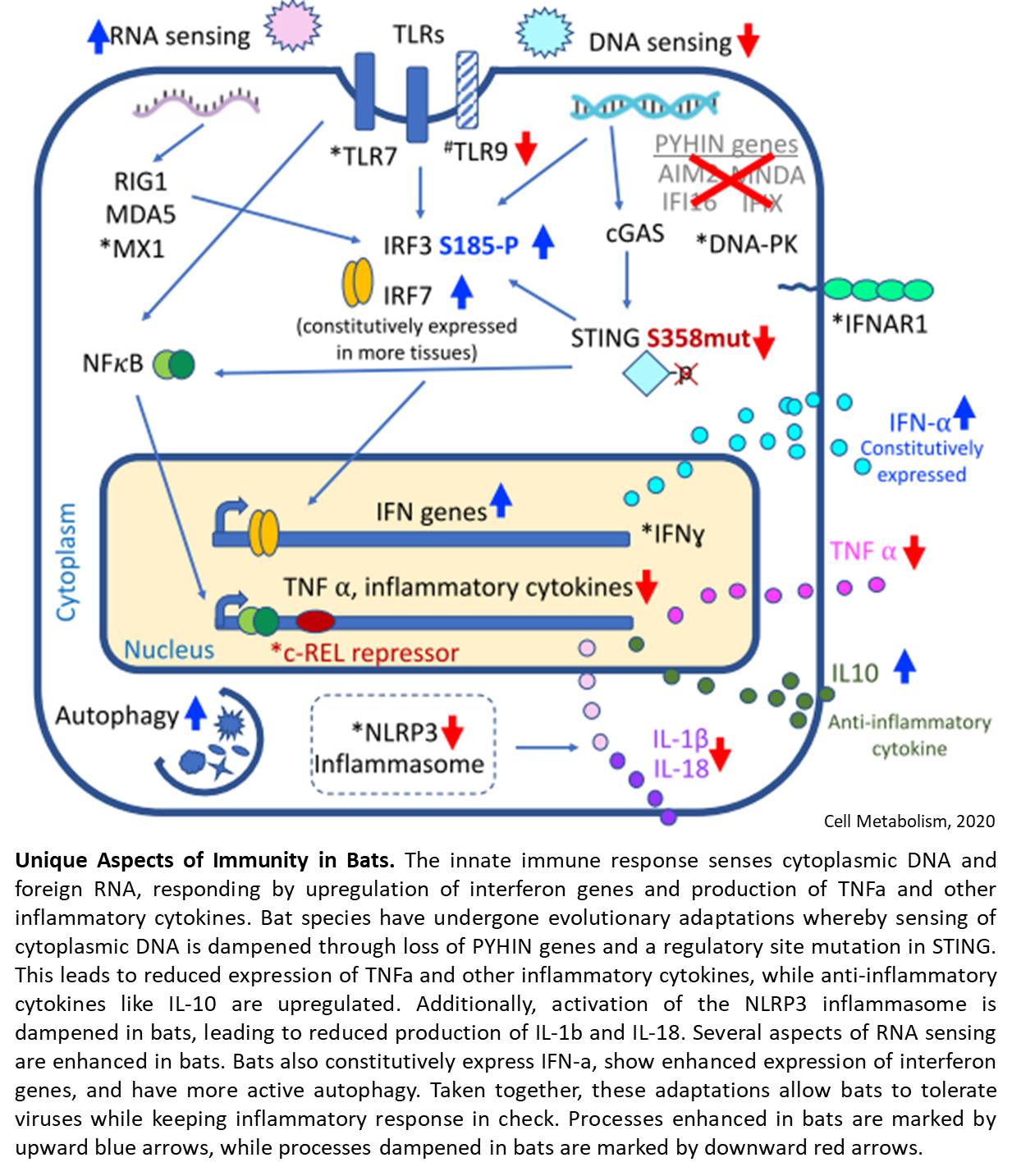 Bats are often considered patient zero for many deadly viruses affecting humans, including Ebola, rabies, and, most recently, the SARS-CoV-2 strain of virus that causes coronavirus.

Although humans experience adverse symptoms when afflicted with these pathogens, bats are remarkably able to tolerate viruses, and, additionally, live much longer than similar-sized land mammals.

What are the secrets to their longevity and virus resistance?

According to researchers, bats' longevity and capacity to tolerate viruses may stem from their ability to control inflammation, which is a hallmark of disease and aging. In a review article published in the journal Cell Metabolism, the researchers outline the mechanisms underlying bats' unique abilities and how these mechanisms may hold clues to developing new treatments for diseases in humans.

SARS-CoV-2 is believed to have originated in bats before the virus was transmitted to humans. Although bats were carriers, they seemed to be unaffected by the virus. Another perplexing factor: generally, a species' lifespan correlates with its body mass; the smaller a species, the shorter its lifespan, and vice versa. Many bat species, however, have lifespans of 30 to 40 years, which is impressive for their size.

"We've been interested in longevity and disease resistance in bats for a while, but we didn't have the time to sit and think about it," says the author. "Being in quarantine gave us time to discuss this, and we realized there may be a very strong connection between bats' resistance to infectious diseases and their longevity. We also realized that bats can provide clues to human therapies used to fight diseases."

While there have been studies on the immune responses of bats and studies of bats' longevity, until their article, "no one has combined these two phenomena," another author says.

The inflammation is a hallmark of the aging process and age-related diseases, including cancer, Alzheimer's, and cardiovascular disease. Viruses, including COVID-19, are one factor that can trigger inflammation.

"With COVID-19, the inflammation goes haywire, and it may be the inflammatory response that is killing the patient, more so than the virus itself," the author says. "The human immune system works like that: once we get infected, our body sounds an alarm and we develop a fever and inflammation. The goal is to kill the virus and fight infection, but it can also be a detrimental response as our bodies overreact to the threat."

Not so with bats. Unlike humans, bats have developed specific mechanisms that reduce viral replication and also dampen the immune response to a virus. The result is a beneficial balance: their immune systems control viruses but at the same time, do not mount a strong inflammatory response.

According to the researchers, there are several factors that may contribute to bats having evolved to fight viruses and live long lives. One factor may be driven by flight. Bats are the only mammals with the ability to fly, which requires that they adapt to rapid increases in body temperature, sudden surges in metabolism, and molecular damage. These adaptations may also assist in disease resistance.

Another factor may be their environment. Many species of bats live in large, dense colonies, and hang close together on cave ceilings or in trees. Those conditions are ideal for transmitting viruses and other pathogens.

"Bats are constantly exposed to viruses," the author says. "They are always flying out and bringing back something new to the cave or nest, and they transfer the virus because they live in such close proximity to each other."

That's not an invitation for humans to toss their masks and crowd together in restaurants and movie theaters. Evolution takes place over thousands of years, rather than a few months. It has only been in recent history that a majority of the human population has begun living in close proximity in cities. Or that technology has enabled rapid mobility and travel across continents and around the globe. While humans may be developing social habits that parallel those of bats, we have not yet evolved bats' sophisticated mechanisms to combat viruses as they emerge and swiftly spread.

"The consequences may be that our bodies experience more inflammation," the author says.

The researchers also recognize that aging seems to play an adverse role in humans' reactions to COVID-19.

"COVID-19 has such a different pathogenesis in older people," the author says. "Age is one of the most critical factors between living and dying. We have to treat aging as a whole process instead of just treating individual symptoms."

The researchers anticipate that studying bats' immune systems will provide new targets for human therapies to fight diseases and aging. For example, bats have mutated or completely eliminated several genes involved in inflammation; scientists can develop drugs to inhibit these genes in humans.

"Humans have two possible strategies if we want to prevent inflammation, live longer, and avoid the deadly effects of diseases like COVID-19," the author says. "One would be to not be exposed to any viruses, but that's not practical. The second would be to regulate our immune system more like a bat."