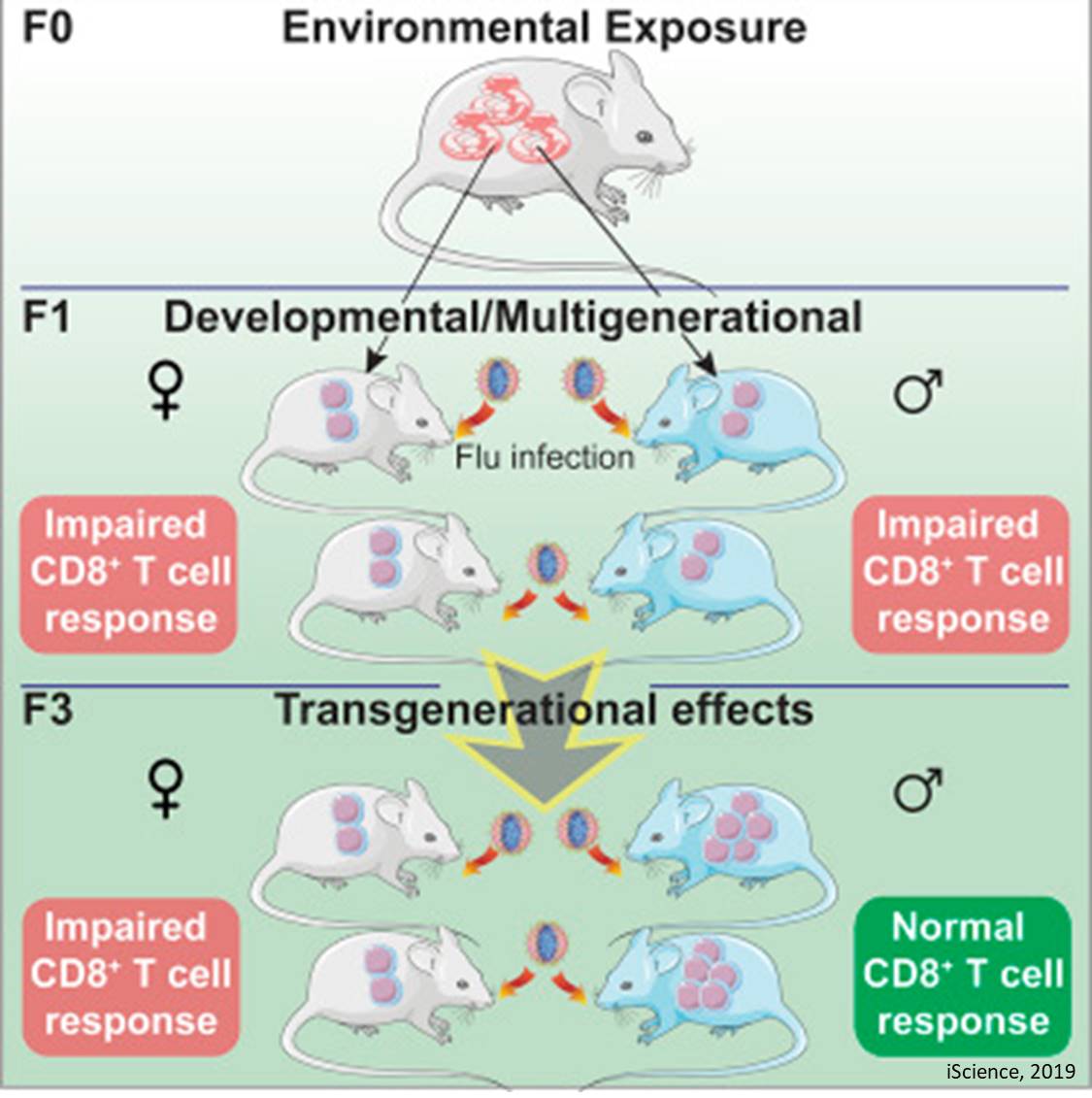 New research shows that maternal exposure to a common and ubiquitous form of industrial pollution can harm the immune system of offspring and that this injury is passed along to subsequent generations, weakening the body's defenses against infections such as the influenza virus. The study appears in the journal iScience.

"The old adage 'you are what you eat' is a touchstone for many aspects of human health," said the senior author. "But in terms of the body's ability to fights off infections, this study suggests that, to a certain extent, you may also be what your great-grandmother ate."

While other studies have shown that environmental exposure to pollutants can have effects on the reproductive, respiratory, and nervous system function across multiple generations, the new research shows for the first time that the immune system is impacted as well.

This multigenerational weakening of the immune system could help explain variations that are observed during seasonal and pandemic flu episodes. Annual flu vaccines provide some people more protection than others, and during pandemic flu outbreaks some people get severely ill, while others are able to fight off the infection. While age, virus mutations, and other factors can explain some of this variation, they do not fully account for the diversity of responses to flu infection found in the general population.

"When you are infected or receive a flu vaccine, the immune system ramps up production of specific kinds of white blood cells in response," said the senior author. "The larger the response, the larger the army of white blood cells, enhancing the ability of the body to successfully fight off an infection. Having a smaller size army - which we see across multiple generations of mice in this study - means that you're at risk for not fighting the infection as effectively."

In the study, researchers exposed pregnant mice to environmentally relevant levels of a chemical called dioxin, which, like polychlorinated biphenyls (PCBs), is a common by-product of industrial production and waste incineration, and is also found in some consumer products. These chemicals find their way into the food system where they are eventually consumed by humans. Dioxins and PCBs bio-accumulate as they move up the food chain and are found in greater concentrations in animal-based food products.

The scientists observed the production and function of cytotoxic T cells -- white blood cells that defend the body against foreign pathogens, such as viruses and bacteria, and seek out and destroy cells with mutations that could lead to cancer - was impaired when the mice were infected with influenza A virus. This weakened immune response was observed not only in the offspring of the mice whose mothers where exposed to dioxin, but in the subsequent generations, including as far out as the rodent equivalent of great-grandchildren. The researchers also found that this effect was more pronounced in female mice.

The study authors' hypothesis that the exposure to dioxin - which binds a protein in cells called AHR - in some fashion alters the transcription of genetic instructions. The exposure itself does not trigger a genetic mutation, rather the cellular machinery by which genes are expressed is altered and this phenomenon is passed onto subsequent generations.

New genes found that determine how the heart responds to exercise Why do we need one pair of genome?

Why gene sequencing fail to detect some congenital abnormalities?