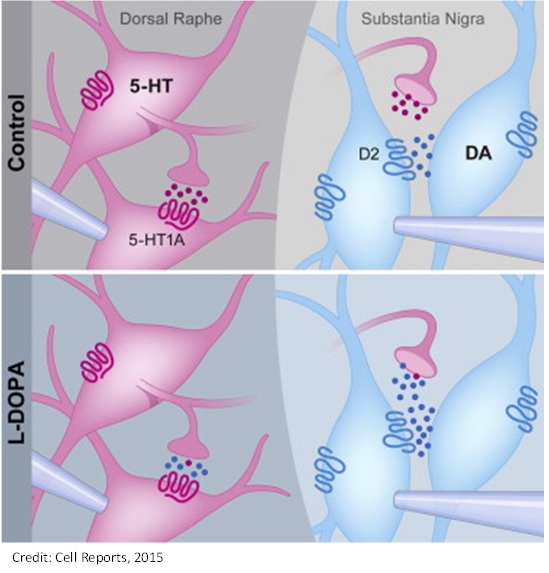 Imbalance between the dopamine and serotonin (5-HT) neurotransmitter systems has been implicated in the comorbidity of Parkinson’s disease (PD) and psychiatric disorders.
L-DOPA, the leading treatment of PD, facilitates the production and release of dopamine. This study assessed the action of L-DOPA on monoamine synaptic transmission in mouse brain slices.
Application of L-DOPA augmented the D2-receptor-mediated inhibitory postsynaptic current (IPSC) in dopamine neurons of the substantia nigra. This augmentation was largely due to dopamine release from 5-HT terminals.
Selective optogenetic stimulation of 5-HT terminals evoked dopamine release, producing D2-receptor-mediated IPSCs following treatment with L-DOPA. In the dorsal raphe, L-DOPA produced a long-lasting depression of the 5-HT1A-receptor-mediated IPSC in 5-HT neurons.
When D2 receptors were expressed in the dorsal raphe, application of L-DOPA resulted in a D2-receptor-mediated IPSC. Thus, treatment with L-DOPA caused ectopic dopamine release from 5-HT terminals and a loss of 5-HT-mediated synaptic transmission leading to synaptic imbalance in neurotransmitter release and might cause implusive behavior in patients..
http://www.cell.com/cell-reports/abstract/S2211-1247(15)00731-7
Edited September 25th 2015